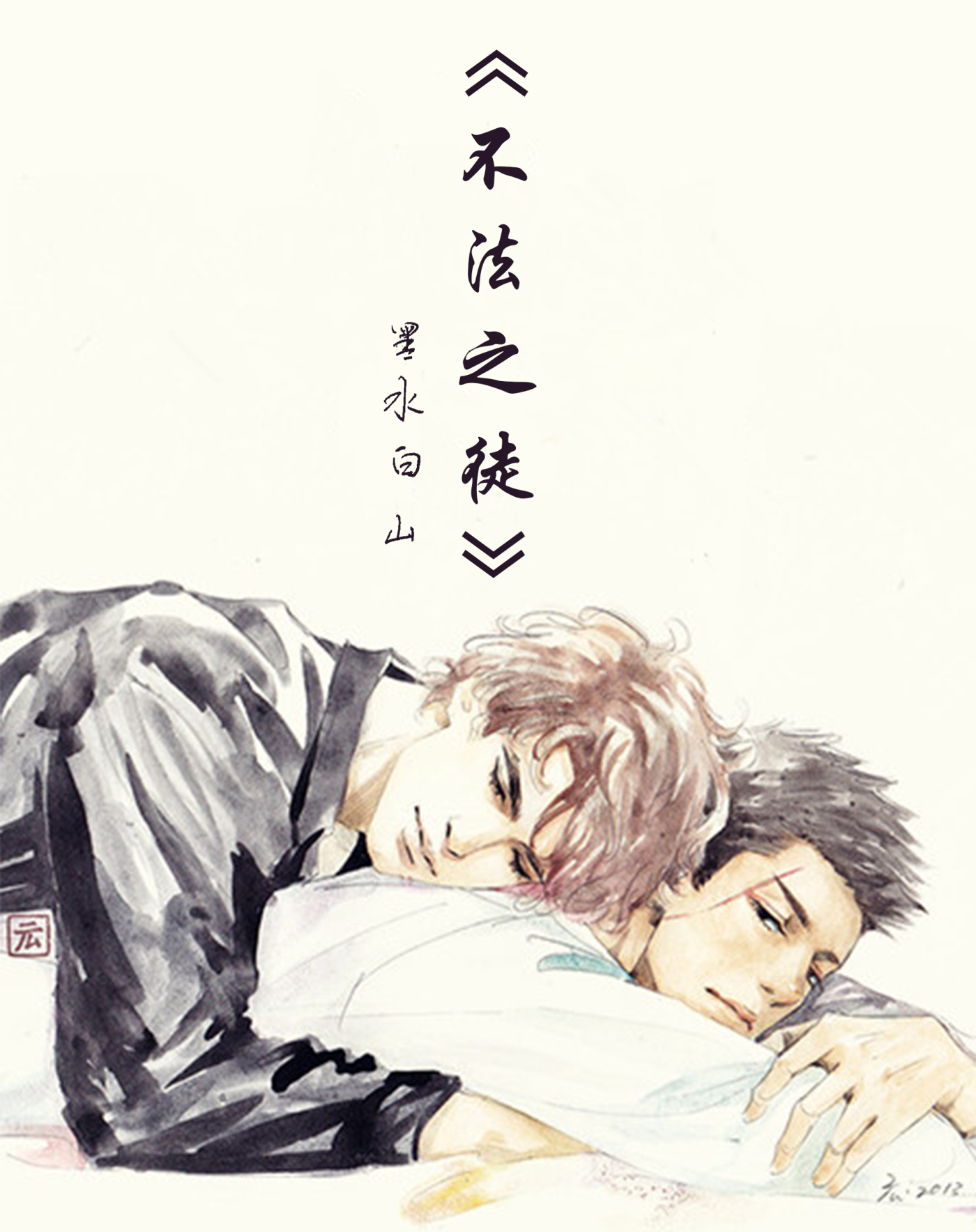 Status in Country of Origin. One entry per line
2 Volumes (Complete)
79 chapters + 5 extras

What was meant to be a quick breakage of their sibling’s relationship, brought about a lingering memory of Xiao Li’s piercing gaze, imprinting itself in Qi Xiu Yuan’s heart. Several encounters later, friendship was the underlying word to start off their relationship, yet for Qi Xiu Yuan it had always been something more. Something stronger. For Xiao Li, who had only known the criminal world, how will he take on feelings that he had never felt before?

The bold line that separate the gang member–Xiao Li and the teacher–Qi Xiu Yuan, which path will allow them to meet in the middle?

These are recommendation lists which contains Lawless Gangster. You should give them a visit if you're looking for similar novels to read. Alternatively, you can also create your own list.
More Lists >>>

What to write. It's a story about school teacher Qi Xiu Yuan falling for heterosexual gangster Xiao Yang at first sight. There's a lot of gore and mentions of cut of body parts, killing, drugs, prostitution. On plus side the underworld is portrayed quite realistic, non of this brotherhood romantic crap or should I say people who believe in it die early in this novel. Still trying to make heads or tails of Qi Xiu Yuan. You would think that gangster with dark past will be complicated one. So far... more>> I'm starting to think of him as naive cute white bunny compared to that teacher, when said person has to do anything dark yet. This story is dark, more complicated than you think, different compared to others stories from yaoi genre. So WHERE'S THE FLUFF I'm asking you !? It's yaoi for @#$% sake. Exactly that's the problem no fluff so far, no funny moment's, nothing nada.
So not my cup of tea.
Spoiler

Apologies if there are any spoiler-esque ideas that are not marked as this is my first review on NU. You have been warned. This was a very difficult novel for me to read. Most of what I read is very fluffy and one dimensional. The MC and ML see each other and fall in love with light drama, they slap the faces of cannonfodder, and break worlds with golden fingers, systems, super IQs, etc. This novel was anything but that. The story focuses on the life of a high school teacher and... more>> the gang leader he falls in love with. Rather than focusing on the falling in love or the contrast between being in the light (teacher) and dark (gang leader), the primary focus is on the idea of inextricably sinking deeper into the darkness and just what you are willing to give up for the light you find in your life, how far you are willing to go to protect the things you love. The devotion between the main characters was as conflicting as it was constant, brutal at times, and sweet enough to melt your heart to tears. Though there was some violence in the story - it is a novel about organized crime after all - the focus stays on the relationships between the characters, with hint of mystery/suspense in each one having their own hidden thoughts and agendas. At the end of the novel, the thoughts of each person are finally revealed alongside the manifestation of their actions throughout the novel. The result of one of the characters in particular spurred me to write this review:
Spoiler

The final antagonist of the story, Li Shi Qing, has loved Xiao Li since he joined LSQ's gang. While Xiao Li never responded to LSQ's advances he did not go out of his way to avoid them, giving Li Shi Qing misguided hope. At the end, Li Shi Qing finally learns that all of Xiao Li's loyalty comes from a mistaken idea XL had before he joined the gang that LSQ might one day become his father. When LSQ learns the truth, the last of his pride and hope falls apart in a heartwrenching finale. Finally, LSQ is murdered and framed as suicide by the business partner XL used to get out of the underworld.

"He did not want the killer's face to be the last thing he saw in his life. So, he shifted his gaze toward the direction where Xiao Li had left. He never closed his eyes."

The point is no one is evil and you are left reflecting on the stories of those who did die.

[collapse]
Lastly, for anyone wondering about the ending:
Spoiler

It is indeed a HE story. Xiao Li and Qi Xiu Yuan do end up together and have left the underworld

[collapse]
Last thoughts? It's an amazing story fully deserving of 5 stars. Am I going to read it again? Probably not. Like Cold Sands, Deceive, City of Endless Rain, If Only Time Stopped at the Moment We First Met, Yesterday, and countless others, once is enough. <<less
14 Likes · Like Permalink | Report

That was honestly amazing story. It's about the romance between an incredibly normal man, Qi Xiu Yuan, and a gangster who is deeply entangled with the gang, Xiao Li. However, the story very much revolves around gang politics, backstabbing, and politicians. As the novel progresses, we see more and more of how brutal the gang life is, and how miserable it is for Xiao Li and his friends. Political twists in the plot are also very well-written and unpredictable leading up to a satisfying conclusion. I can't say much without... more>> spoiling, but as the story started ramping up, I found myself thinking, "Woah. I did not see that coming, but that makes so much sense" multiple times. The author clearly spent quality effort into planning out this novel! All in all, great angst and amazing ride. I would definitely recommend this as a read. I don't believe it deserves the 1.0 ratings at all because it is well-written with fleshed-out, relatable characters and a satisfying, complete story. But this is also a novel that is pretty explicitly in a 'yaoi world' because of the romantic dynamics in it. <<less
5 Likes · Like Permalink | Report

I like gangster stories, but they can be really dark. This novel is on the brighter side. It doesn't shy away from the messed up reality of criminal life, but it doesn't focus on it exclusively except towards the end, spending several chapters explaining the antagonist's demise (My least favorite part of the novel—not surprising because it focuses on my least favorite character and it seems to wrap things up too neatly—but it's all in the name of character depth so I'll deal. The extras more than make up for... more>> it *waggles eyebrows*). This is a beautiful love story. It's not all roses and sunshine the first time they meet, and it still isn't roses and sunshine until much later. But I didn't find it angsty, things do get better, and the main couple's relationship develops very naturally as they navigate through the inevitable dangers of ML's life. Given the setting, I think the couple has plenty of sweet moments. There are some things that aren't explained in the end, but it doesn't change my overall appreciation of the story. Those tidbits are trivial in the face of the characters' happiness. I'm not just being overly biased.
Spoiler

Does it matter who the MC's real father is? To me, it doesn't matter one iota because knowing the answer wouldn't change the ending.

I had some other questions, but rereading chapters 22-23 (ML meets ZJJ and beats up MC), I came up with my own conclusions and it just makes me appreciate the characters more:

MC says Du Yan San Ge isn't his grandfather (even though he is) *squarely* to ML's face to test if ML actually researched him, which he hasn't because ML proceeds to beat him up. When MC gets asked about the actual lie (his grandfather saying "The path they walk may be different from ours but just like us, they are humans"), only then is he ashamed to face ML and admit it's a lie.

[collapse]
Bottom line: MC gives an award-winning performance, ML is adorable, and it's a happy ending. Even though the antagonist is disgusting, he's not completely dishonorable, so you won't have to worry about reading something extremely nasty. Persevere and the sky clears. <<less
4 Likes · Like Permalink | Report

This novel is at times frustrating. It had great potential, but the writing is disjointed and disconnected at times - in that scenes will be abruptly strung together without connection or flow and the reader is left to figure out the transition on their own. Also I don't like the MC. He is a hypocrite about wanting his sister to distance herself from the gang life while getting involved himself. He should have at least given his approval for their relationship. He lies to the ML ... more>>
Spoiler

about his background just to get closer

[collapse]
edit: after reading the whole thing, I can see how some of these side characters are involved. I liked some of the plot complications/twists along the way and am glad that MC's 'lie' ended up not being one after all. Also glad the antagonists get the ending they deserve, as do the protagonists. I just wish extra 1 was about how the main CP's siblings met. I'd overall revise my rating to 4/5. I guess it was worth reading after all. <<less
1 Likes · Like Permalink | Report

Underrated sweet gangster flavored gem. Can and will recommend! Both the MC and ML are strong, interesting characters who fit well together. The reletionship builds slowly and they definitely have their troubles on the way, both internal and external, but it is overall a very interesting journey to follow. The plot has a lot of drama and tension and twists and turns. And blood and betrayal and uncertainty and shadyness. It kept me guessing and on my toes. The ending was
Spoiler

Let me share my piece about this story. First, I like it so much especially the part that the bottom is the most uncommon bottom out there, (like yeah, the bottom (pertaining on this story) tend to be the top but then this story just made a unique turn of position which I love the most). To be honest, I don't really like that the top which is common to every bl that always has a strong character, like he is violent and all but I don't like that... more>> kind of top I like the top to be somewhat timid but then has a monster side (yeah!!) like our laoshi here. It feels like I am focusing only on the position part, so let me share why I like the story, so let me have another count down, first, the story is about gangster and I like how the story was told and yah, I apparently like stories like this, second, the process of their love might be annoying, (yah sorry that I found it annoying) but it gave me the fulfilling feeling when I was reading the story further. It put smile on my face cause I find them too cute, yah it's cute! Third, I like the main problem of the story. I like how everything was placed on its right places as the story came to its end. So I highly recommended this novel. <<less
1 Likes · Like Permalink | Report
Leave a Review (Guidelines)
You must be logged in to rate and post a review. Register an account to get started.

[BL] Between an Alpha and Omega