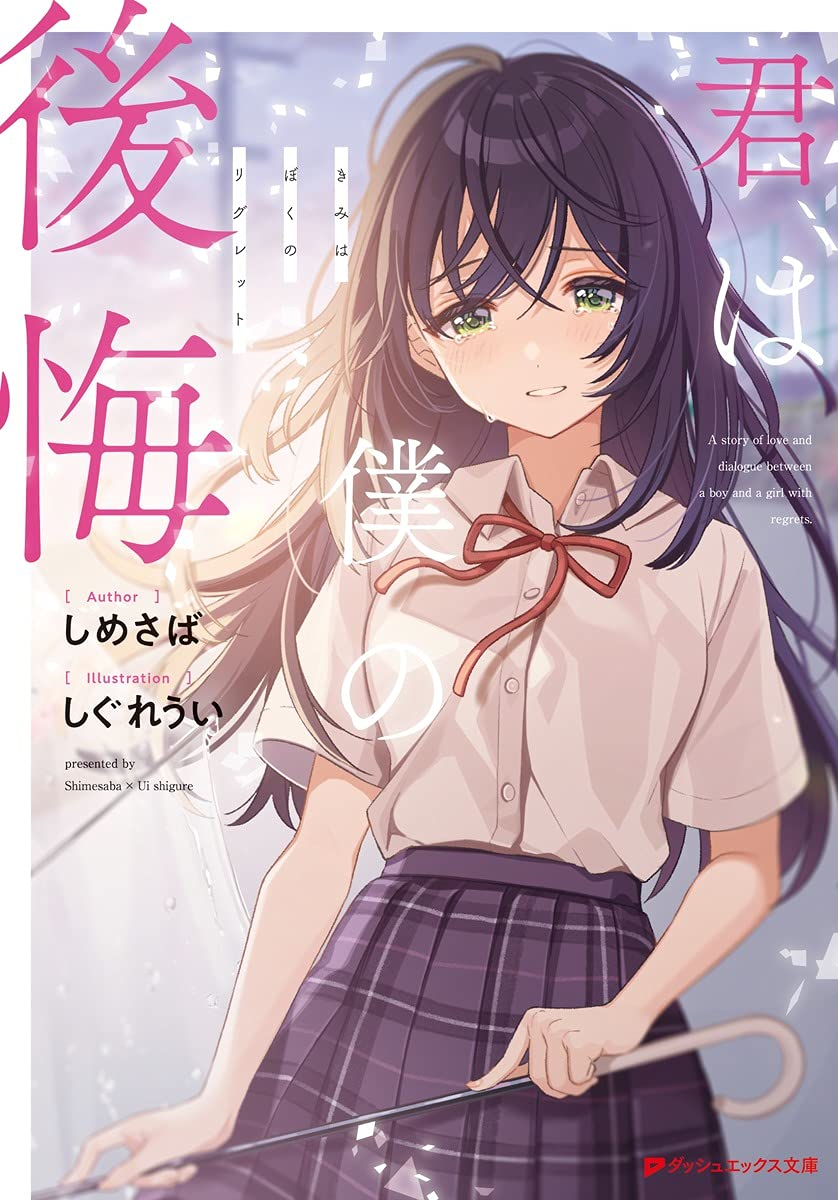 Status in Country of Origin. One entry per line
3 Volume (Ongoing)

Asada Yuzuru’s regrets. It was Mizuno Ai, the sweetheart in middle school. I like Ai. But she suffers from her freedom. A romance in the past high school. The love between the two gradually became a thing of the past and should become a memory. However, in the summer of his first year of middle school, Ai reappears in front of Yuzuru.

……With the same help as before. You can’t convey it unless you put it into words. But I can’t understand it from words alone. The two opposites collided and passed each other… What was the answer that was finally found? A love story and dialogue between a boy and a girl who have regrets.

One entry per line
You Are My Regret
君は僕の後悔

These are recommendation lists which contains Kimi wa Boku no Koukai. You should give them a visit if you're looking for similar novels to read. Alternatively, you can also create your own list.
More Lists >>>

Okay then shall we begin the assessment... The novel is kinda uninteresting for me, tho not sure if you are interested or not. If I describe this experience its like eating a small sandwich filled to the brim with meat, lettuce, tomato's, the usual sandwich fillings but when biting it you cannot even eat it cause you cannot put it in your mouth its too big for a small sandwich. This plot has alot going for it the problem is that its a short story it simply cannot force the plot... more>> between its small chapters like your still filling as described from above a sandwich that is meant to be a light meal but was being forced to be filled by meat. And other assortments and reading it was like being forced upon you, its spoon feeding you a spoon that is filled with a big vegetable that cannot even fit on your mouth. And thats just the start. And yes this novel only consists of 4 characters well if you have a massive imaginative brain you could probably imagine a classroom filled with people.
Spoiler

as stated in the description this story revolves around a couple that broke up and is reunited by fate from what I get from reading this was that our MC is just a typical guy that likes to read books and our overwhelming innocent fMC who is easy going and free spirited in the first chapter introduce us to Yuzuru (mc) and to Odaijima (supporting role) they are discussing the transfer student in which is Mizuno (fmc) the ex girlfriend of Yuzuru welp since it still the start of the chapter he don't know whats the name of this new transfer student in which when he heard the name of our quite energetic female main character he said that it was the same name as his friend after this little conversation Yuzuru coincidentally found Mizuno and basically said hi in which triggered a flashback about them and basically you'll know it after reading after this little flashback from what I recall after this conversation after a few days while Yuzuru is home Mizuno Came to visit him and basically asking Yuzuru to take him and basically stroll around and remember the past and I remember after this scene a flashback played and basically said the reason about why they broke up after this scene ends we have been introduced to the "rival" his name is Ando the normal popular student that I do believe everyone has meet in school and probably interacted with. He basically wants to date Mizuno so he Goes to Yuzuru and basically "asked are you guys dating?" in which Yuzuru answered "no" which would basically give a sign that he is perfectly fine to pursue a single girl and after a while a sudden downpour occurred we got ourselves an conversation of Odaijima and Yuzuru in which I forgot what was it after this conversation as Yuzuru is already near his house he saw Mizuno basically wet and is standing on the rain without cover and I will not spoil what happens next after this they basically start, the beginning of their love story.

[collapse]
From what I get from reading this is, it feels like a whole prologue, the way I interpreted the ending is I thought of it as ambiguous I think that the ending is the start of their love story
Spoiler

since they basically started at the beginning again

[collapse]
And thus ending another review have a g'day <<less
5 Likes · Like Permalink | Report
Advertisements
Leave a Review (Guidelines)
You must be logged in to rate and post a review. Register an account to get started.