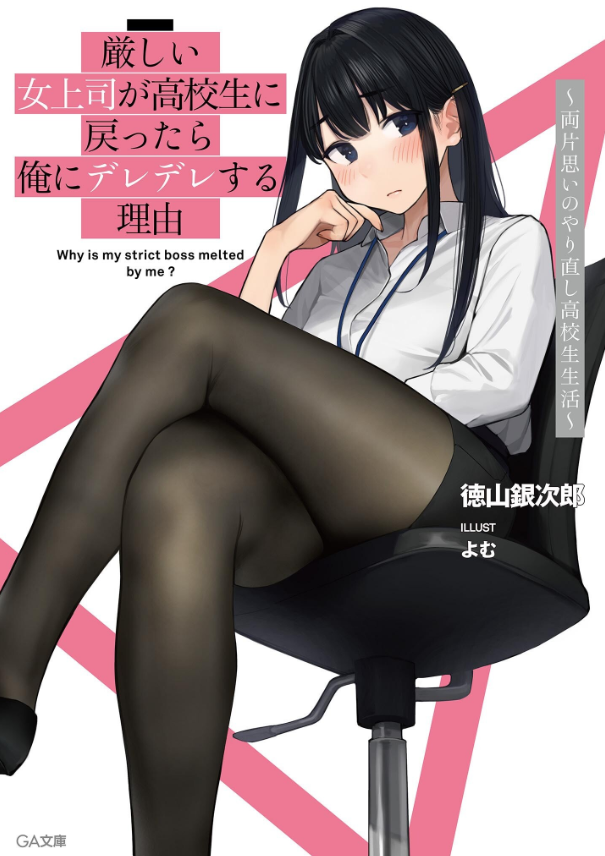 Ginjirou Tokuyama and Yom bring you a romcom full of unrequited but mutual love!

Average company worker Shimono spends his days constantly being helped and scolded by his superior and section chief Kamijou Touka. One day, he finds himself having traveled back in time to his high school years. He sees this as a chance to aggressively approach the section chief a second time around, only to find out that very woman had turned into a girl constantly acting lovey-dovey towards him!

Turns out that she also time leaped back in time to the same point as Shimono. She was under the impression that she was the only one who traveled back in time, deciding to act as lovey-dovey and close with Shimono, who she actually had feelings for at the time.

“W-Wait, are you actually the Shimono-kun from the sales department?! Ahhh, this is so embarrassing, I want to dieeeeee!”

Through this leap in time begins a romantic story depicting this mutually unrequited love!

These are recommendation lists which contains Kibishii Onna Joushi ga Koukousei ni Modottara Ore ni Dere Dere suru Riyuu. You should give them a visit if you're looking for similar novels to read. Alternatively, you can also create your own list.
More Lists >>>

Ok how do I put this... It has an interesting premise. The initial characterizations of the male and female lead made them relatable and easy to like. The character designs are very well done, the artist is one of my favorites. However... the story after the prologue is just so bizarre that it caught me off guard. For a bit I thought it was a prank from the translator but then it just kept going. I wouldn't recommend starting this if you're not a fan of slapstick comedy or nonsensical story development.... more>> Especially don't start it if you don't like dense protagonists that only get denser as the story goes on. I have a feeling the tags for this series will be heavily edited in the future.
Spoiler

My guess is that the story is supposed to be a fever dream of some kind. Which would make the events of the story completely irrelevant until you actually get to the twist or climax, and frankly I don't know if the possible payoff is worth trying to read the story until that point.

Or it's possible that the story is meant for a manga format rather than a light novel one. Since manga tend to favor that kind of random comedy.

But that's just my opinion.

[collapse]
Edit: to reply to another review. No you don't get "used to" dense protagonists who are THIS dense. Either you like them or you don't. Furthermore, reincarnation? What the f*ck are you talking about? They went back in time. Unless you're talking about spoiler stuff, which is its own issue, this story as of volume 1 has no reincarnation. Also, fix your spelling and grammar mistakes. <<less
1 Likes · Like Permalink | Report

Its good. I usually dont read reincarnation romcom but the premise of teo people being reincarnated and an onee san type character caught me. I sure wasnt let down. I see alot of people not liking it because the protagonist is the densest material created but once you read a couple of them you'll get used to it and like it. The added pov of the FMC is also good so that we can confirm the feelngs of the FMC. Overall 4/5 not the best bit certainty not mid
0 Likes · Like Permalink | Report

Protag could give Ichika from IS a run for his money in terms of density. Female protag also missing a tsundere tag. Very very slow paced and as much as I hate to say this, the manga is actually better (even if you don't count the blatant fan service). This is also taking into account that the manga is predominantly 2koma & 4koma format. Even the 2 stars im giving is super generous.
Basically just author banking on vanilla and sugar filled storyline with very slow development.
0 Likes · Like Permalink | Report

First off, thanks to the translator. The english was fluid and engaging. For the story itself, it was ok. Not really to my liking, but may be to others. Like the other review, big warning sign for super-dense protagonist. I am at the point with reading some of these WN/LN where a dense protagonist is actually a story type rather than simply a character trait. ... more>>
Spoiler

if you actually want something to happen in the end, this is not the story for you. Basically, a dense protagonist ending. Sigh

[collapse]
UPDATE Finished v4 and upgrading to four stars. The translator did a fantastic job with this story. For the story itself, it improved as the volumes progressed.
Spoiler

We got there in the end and v4 actually came out really well, wrapping up the story. I think once you know there's an actual ending, it makes reading the dense protagonist parts in earlier volumes easier to cope with.