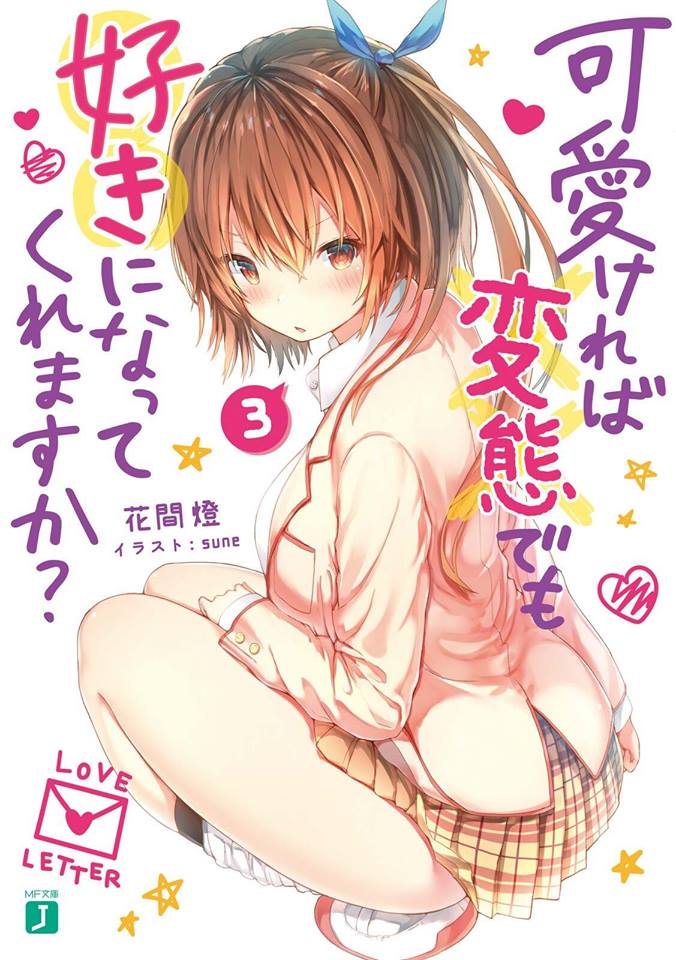 One entry per line
Hanama Tomo

One entry per line
Sune

One entry per line
Media Factory

The story begins with the protagonist receiving a love letter with panties attached to it and then they try to find the girl who left the letter and panties..

One entry per line
Hensuki
Would you love perverts if they're cute?
可愛ければ変態でも好きになってくれますか？
変好き

Banzai.. Thanks to translator who picking this novel up. Okay dont expect too much since its usual japanese rom-com novel. However, for people who missing such novel nowadays as too much isekai reincarnation stuff, this novel is like oasis in middle of desert. Story about keiki, our MC who find himself a love letter without name to him with a panties. Yes, a panties. Then story proceed with the MC looking who is his cinderella by looking all possible girls arround him. Character is usual setting, as we have sister, kouhai, legal... more>> loli and beautiful senpai, and classmate. However, not with their 'weirdness/obsession' which make the MC suffered in this novel. I wont spoil anything about it but, it happen. While MC looking his cinderella, MC also found the girls secrets. Overall its fine novel with enjoyable plot and pace, nothing special with this novel but also nothing lacking so far too. I admit I quite enjoying this novel. 5/5 <<less
11 Likes · Like Permalink | Report

So this starts out looking like an average romcom. The writing style is very simplistic, the author repeats himself all the time, but overall it seems okay. Then it throws you curveballs. I won't spoil anything here, but suffice it to say that it quickly stops being an average romcom. Then it really starts pitching all kinds of wild curveballs. Characters you thought were throwaway suddenly become important, and every single character is given an actual backstory, hopes, dreams, and fears. Then character development starts and the feels train quickly follows. It's a... more>> wild ride, and I'd heartily recommend it. It is far from your average romcom story. Are you tired of bland, flat harem stories where the characters are cookie-cutter tropes with no actual personalities of their own? This story is for you. <<less
8 Likes · Like Permalink | Report

As much as I love the series, there are things that I found that I cannot tolerate by the time I hit the latest update.
Spoiler

When Keiki learned who Cinderella was, he should've been able to accept her despite being a pervert. Cinderella did left her panties, which should've raised a flag earlier on, but because he's dense as f*ck like most romcon protagonists, he didnt notice that. Pretty much everyone else has shown hints here and there, but even though he's getting the "feeling", he keeps on rejecting them because of their fetishes.

Most people say that this sh*t ain't good after watching the anime only. I was gonna believe them until I read the novel. A usual romcom but with a change like "all heroines ars pervs" makes it more refreshingt other manga or LNs. I must say, I'm really impressed at what the author did there. Not many comedy LNs these days can make me enjoy reading like this one. (I usually read something with "Drama" tag or its equivalent) Going along with the story there a some really cringey moments but... more>> it still make my head goes "all on LMAO" and I had to refrain from laughing out loud because I don't want to interrupt my family's sleep. Personally I don't like cringey moments but this one is an exception. As the story goes on, we get to be introduced to even more characters, each has their own personality and of course, a type of fetish that really triggers the MC. It's a typical harem novel but isn't bland and cliche like other harem-ecchi-comedy novels Also, the illustrator did a really great job out there. The illustrations look nice. 5 out of 5, no Rip & Tear needed <<less
1 Likes · Like Permalink | Report

The first 3 volumes were fun but after that we have the cliche harem protagonist, indecisive, clueless, dense and irritating. And also a misleading a*hole. I downgraded this novel from 4 to 3 stars for now. If things remain the same I'll give 4 stars for the first 3 volumes and 2 stars for the rest.
1 Likes · Like Permalink | Report
Leave a Review (Guidelines)
You must be logged in to rate and post a review. Register an account to get started.

Special Operations Forces In The Other...
Advertisements