Novel Updates
RegisterLogin
Theme
Search
Your changes has been saved.
It’s Easy to Take Care of a Live-in Hero! 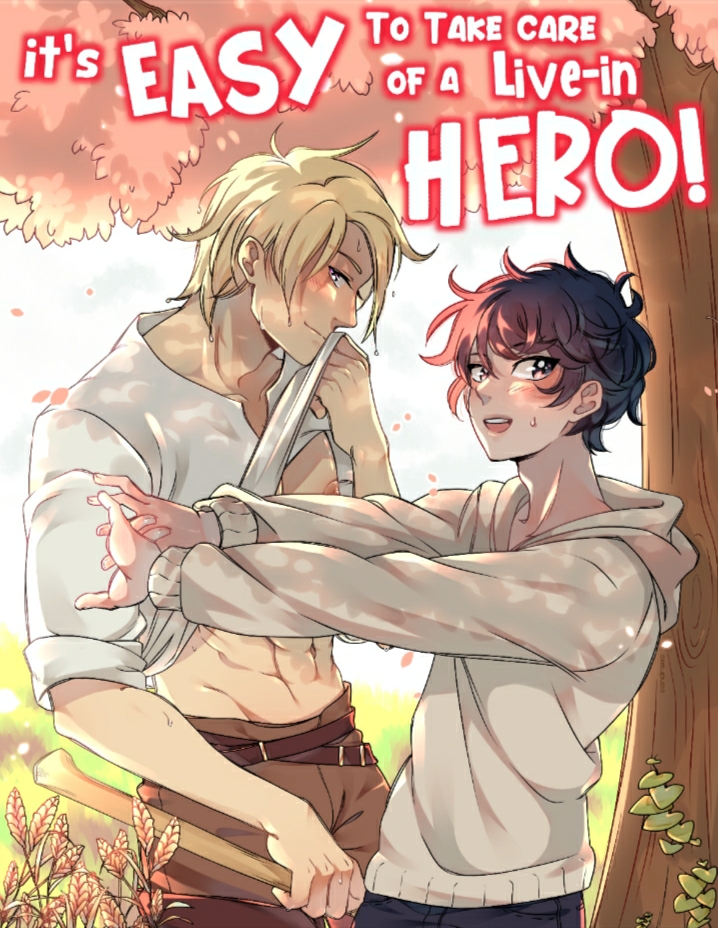 One entry per line
Goldfish
金魚

Status in Country of Origin. One entry per line
Completed (45 chapters + 10 extras)

Just one step in the wrong direction, and I managed to cross over into a different sphere. A newly-made world of a God.

In the distance stood a small house surrounded by a field. And inside lay a man on a bed.

According to the God, he was a hero. One who had died in a tragic event.

Then the next words of the God threw me into a panic.

What did you mean I needed to save money to return to my original world?

Since there was nothing else I could do anyway, I dove head first into my goal. Plucked some grass. Grew some vegetables. All to earn a steady income.

Apparently, my profession was the “Hero’s Wife,” but that’s definitely a bug, right?

One entry per line
住み込みで英雄をお世話する簡単なお仕事です

Nurturing the Hero to Avoid Death (4)
The Traveling Hero Won’t Let the Innkeeper’s Son Escape (3)
Picked up a Strange Knight (1)
I Became A Virtuous Wife and Loving Mother in another Cultivation World (1)
I Don’t Dare to Oppose a Protagonist Anymore (1)
Parenting in Full Bloom! The Former Villainous Noble Son Who Found His Love Nest (1)

These are recommendation lists which contains It’s Easy to Take Care of a Live-in Hero!. You should give them a visit if you're looking for similar novels to read. Alternatively, you can also create your own list.
More Lists >>>

The plot didn't make sense tbh. But that's the point! So we can have the fluff and the sweetness of the CP without having too much thought. The story is nice and fun kinda fast paced but not too rushing. Everything is well explained so we didn't leave confused with the weird setting. I'm pretty sure the other reviews have covered enough with the summary and spoiler. Although this isn't exactly my cup of tea but I'm giving this 5 stars coz what the heck is going on with those 1... more>> star. I mean I personally think this story deserves more than 1 star. <<less
0 Likes · Like Permalink | Report

It's a pretty cute story (in my opinion at least). I mtl-ed this a while back (so memories of the story are a bit fuzzy), so it's nice to see it getting translated. ... more>>
Spoiler

The God (?) gave our MC a way to see his status (?) so that he can see his progress (so that he can leave the place). But as he interacts with ML after he wakes up, his status/rank/title (I forgot exactly what it was) gets upgraded to "hero's wife" or something like that. Lol. MC was very thrown off by that. Hence that one part in the summary.

Another thing to add is that, in ML's world, telling someone your full (real) name means that you're proposing/interested or something like that to someone (again, I read this a long while back so I don't remember all the details). MC told ML his full (first) name after ML woke up. LOL

Edit:ML told MC his full (real) name (which means he's interested/wants to court MC couple chapters after ML wakes up. (Basically, everyone has a fake or abbreviation of their real name in ML's world) (Guys bear with me here. I'm re-reading the story right now and I'm trying to make sure there's no false info here.)

God later called MC to congratulate him on their marriage lol. That's how MC found out about the name thing.

[collapse]
The ending seemed a bit lackluster to me but it still had a 'feel good' feeling to it so I guess it's fine. Overall, it's a nice story. It's nice to see ML (who's been through a LOT as a hero) relax and be happy with MC. Though I will say that the extras after the ending was a nice little addition to read.
Spoiler

Though I feel like the author could've done better with the premise of the story (I mean, your own little snow-globe like dream place ((that the ML can't leave if I'm remembering it correctly)) is a bit iffy to me but meh. I can get over it, I guess)

Slice of life, fluffy, not much drama or angst, yet still bittersweet enough. You'd like to read this after you read dog blooded BL lol like a cup of warm cocoa. MC is a failed mangaka. Stressed and weary, he decided to take a break and visit his grandma. He got lost and accidentally entered a plot of land created and belonged solely for ML. MC is a 20th-century Japanese person, polite, hardworking, afraid of bugs, with little stamina.
Spoiler

this actually affected his smexy time. He always fainted because his stamina wasn't enough for snu snu lmao but eventually he raised it and both are able to rid of their virgin status

[collapse]
ML was an almost omnipotent hero. His life was so sad God decided to gave him happiness after he sacrificed his life for war. The process of MC falling in love is a gradual thing, and I think ML doesn't really understand the concept of love, yet he's already falling for MC. It's a happy ending.
Spoiler

Aaaahhhh this one is so refreshing!! I can't help but imagining Harvest Moon as the setting lol I love the fluff too 💕
2 Likes · Like Permalink | Report

This story is full of fluff! It's an OK read and the plot line is funny. I usually read more modern stories and just read this one for a break. All in all, I think I like it.
0 Likes · Like Permalink | Report
Leave a Review (Guidelines)
You must be logged in to rate and post a review. Register an account to get started.