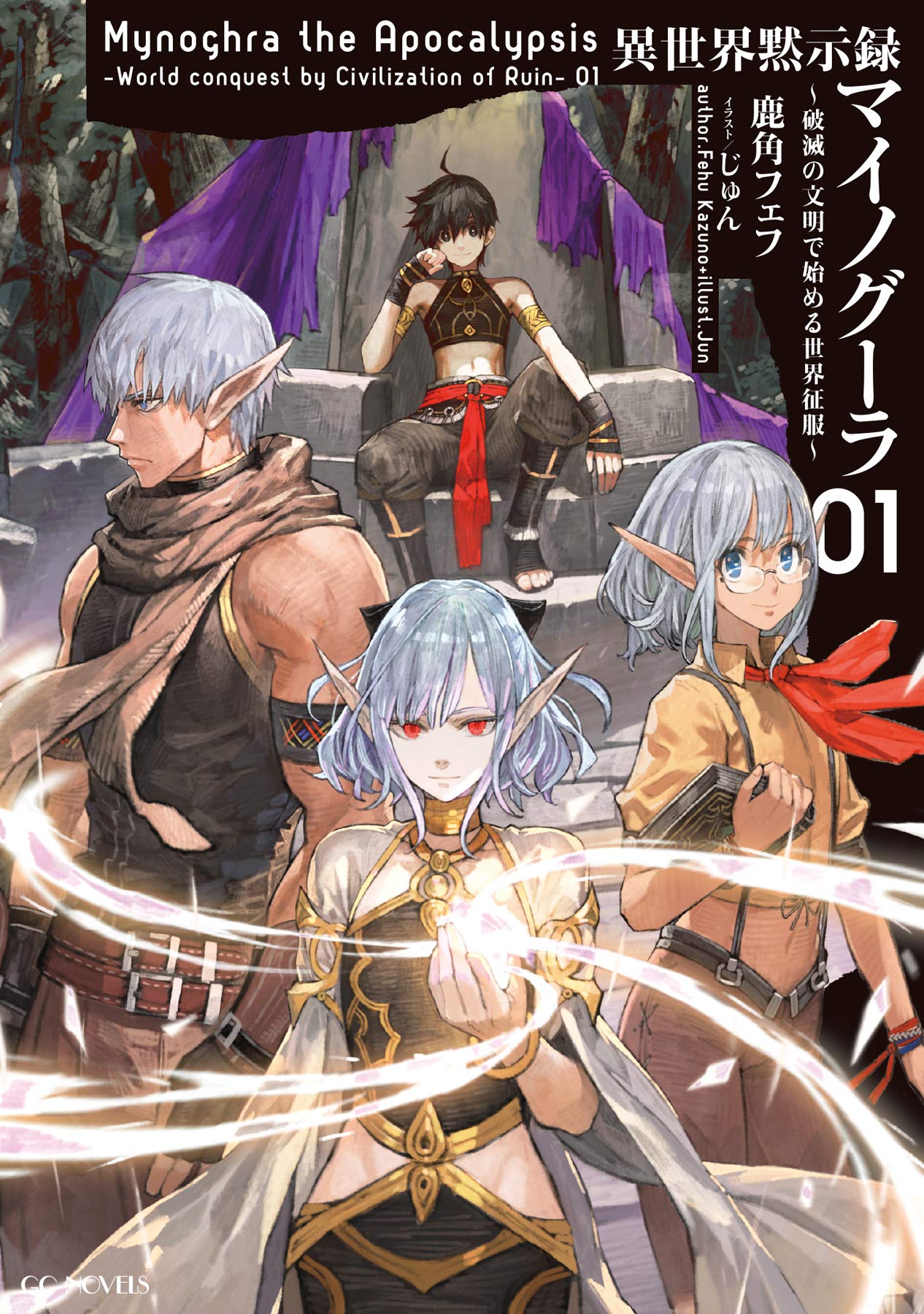 One entry per line
Jun
じゅん

Status in Country of Origin. One entry per line
70 chapters (Ongoing)

It is safe to say that most of Takuto’s life was spent in the hospital room.

Every day is a series of inspections, and there is almost no time to rest.

The only place where he could find his own worth was inside the well-known nationwide simulation game “Eternal Nations”.

A game that uses various races and nations that exist in the fantasy world to conquer the world.

Yes, he was proud of having achieved the highest difficulty level of “Eternal Nations”, which was said to be impossible for people to clear the game using “Mynoghra”, the most difficult state to use.

Among the players, he is legendary, and of all that because of the existence of a girl in front of him–a unit called Atou.

“I don’t know where this is. It might be the world of “Eternal Nations,” it might be the real world where Takuto-sama was, or maybe a totally different world, but just like those days…… Let’s start with just two of us. Let’s create our own kingdom.”

These are recommendation lists which contains Isekai Apocalypse Mynoghra. You should give them a visit if you're looking for similar novels to read. Alternatively, you can also create your own list.
More Lists >>>

The story is relatively unique, especially for a JP novel, and the translation is pretty good. Unfortunately, due to the translator being rejected for Google AdSense, their alternative advertising company causes constant pop ups and redirects, as well as invisible ads on top of every useful link and button on the site. It is still possible to access the chapters, you just have to keep trying it and hoping you don’t get instantly redirected to one of the many p*rn or phishing sites that are advertised. Most recently the author... more>> has offered donators the option of reading chapters on an ad-free site, which, combined with the extremely aggressive advertising on the main site, is effectively all but paywalling all chapters. Hopefully the translator reconsiders the growth and readers they are sacrificing, and maybe they change their mind in the future, who can say. But at the time of this review I can not recommend this novel for the sole reason of the translator’s site being so problematic, which is a shame, because the novel and the translations themselves are quality. <<less
29 Likes · Like Permalink | Report

This is unexpectedly good. Just try to read it yourself if you are curious.. Edit: seems the tl do things for money, thus we can't expect much without paying, I might even try to read the raw as my last resort lol Someone please steal this tl job, of course for free and upload more often,.. Also it seems that he is using Machine Translation (DeepTL for example), I checked in DeepTL and some parts are kinda similar
19 Likes · Like Permalink | Report

Its have potential to be another overlord with additional twist, the main chara can't even talk normally with his followers. The part that I like is he start his kingdom from zero, with just 1 subordinate, while Overlord already have his extremely powerful army and magical castle. It will be interesting to know how he struggle to build his kingdom while avoid conflict with other nation.... hahaha (^ ^)
7 Likes · Like Permalink | Report

I must say, seeing it being inspired by games like Total War:Warhammer is really refreshing, concept of predisposition, alignments and also heroes in a certain civ, (i like the vamps) wow the manga looks good too...
6 Likes · Like Permalink | Report

This twist especially shines when you get to the chapters where the other games start to invade the world our protagonist has reincarnated into, where the "rules", conventions and styles of game play clash. The interesting ways both the nation Mynoghra and the various antagonists uses their "rules" in order to subvert the world's logic makes every fight tense and lends itself to clever solutions within the narrative. The alignment system as well make for interesting story telling, seeing the subtle ways, and sometimes not, the alignment changes how some characters act is interesting to see. There's a chapter later in vol 3 that really makes me excited for what the alignment system can do narrative wise.

[collapse]
Takuto is a competent protagonist, and most of his "power" comes from his ability to leverage his past knowledge and adapt to changing circumstances quickly instead of being given god-like abilities from the beginning, always a plus. Another reviewer compared this to Overlord, which is not unfair, but I think "The Strongest Clan's Master Is the Weakest and Most Evil Support Class" is closer to the tone of this story (which is also good) where the protagonist as well as his nation is up and coming rather than a world threating menace from beginning. The cast is also interesting, which is a godsend in these more character driven stories. There's mystery and intrigue and as of the current raw chapter, you begin to see the contours of the main conflict and where everything is going, though it's still early. No harem hijinks or love triangles so far, and whatever romance there will be will most likely be between Takuto and the first hero Atou (not a spoiler, if you didn't see that coming I don't know what to tell you) All in all, it's a good read and worth your time... if you're willing to read the RAW that is. As of this review the current translator seems to all but paywalled the translated chapters... maybe. The site is completely broken (aside from the patreon and ko-fi links), and before THAT there the site was unreadable due to p*rn and phishing redirects, which prompted me to just go directly to the raw in the first place. Coincidently, you can get access to the ad-free, and presumably unbroken, site by giving them money. I'm not saying deepl can replace a good translation or translator, but it is far and away better than dealing with "this" translator. I've tipped translators before, I have no problem rewarding people for their work materially, but I can't do it for people who deal in shady practices. Edit: As of 1/27/2021, the site is working and readable, no popunders or redirects. Credit where credit is due, they fixed their website, and the translations are good from my skimming. If the issues brought up previously were putting you off reading this little gem, now is a good time to dive in. So far the translated chapters are way past where the manga is, so if you're coming from that there's a lot of story ahead to tide you over. <<less
5 Likes · Like Permalink | Report

It's really great.! I cannot wait for another chapter to be available TT__TT The protagonists possess a devilish aura that causes so much misunderstanding. It's so satisfying..
2 Likes · Like Permalink | Report

Nice story, but a bit random and kinda slow since they are doing a "shutin" strategy, which makes sense story wise On another note, why are the chapters hidden?
the links aren't dead, the ads are just a bit aggressive and redirect you, but if you open the link in a new tab you can just go back to the chapter you clicked originally
2 Likes · Like Permalink | Report

I think the story idea that comes from a strategy game like WORLD OF WAR CRAFT is a fresh idea.
The part that I like the most is that the main character is not a perfect human and has a unique and even ridiculous side, he has to start building his empire from scratch, without the help of supporting figures who are overpowering or excessive cheat skills. The other characters are also unique, the conflict between them can make me laugh or feel sorry. The plot of the story is unpredictable, make... more>> readers curious about what will happen next. <<less
2 Likes · Like Permalink | Report

It's very interesting, with a new idea, completely never used before. The premise is the same as overlords, the MCs with the game characters are transferred to another world. It's the same but when you read the story it changes your mind ... more>>
Spoiler

Ideas that have never been used: NPC characters in other games are transferred to the world where MC is

The game system is also transferred. That is, when an RPG game character is transferred to a new world, the RPG system in the game will still bind the game character. For example, when you fight a boss in an RPG game, you will not be able to back down, the only choice is to defeat the boss or you die, now when in a new world, the system also participates in battles, whoever fights the boss of an RPG game will not be able to escape. The only choice is to beat the boss or die.

I started reading Mynoghra after reading the manga and this is one of the best isekais stories I've found so far. It's reminiscent of Overlord, where the MC is transported into a game-like world, but unlike other series, it focused the beginning of the story on civilization building. While the settings and themes aren't unique, the story so far doesn't have those annoying "status sheets" or infinite "level ups" so common in isekai stories. Even the mention of skills isn't in your face, as in other web novels. Here's hope that this... more>> goodness continues and it will have a faithful reader in me. <<less
0 Likes · Like Permalink | Report
Leave a Review (Guidelines)
You must be logged in to rate and post a review. Register an account to get started.

Faker In The Irregular At Magic...
Advertisements