Novel Updates
RegisterLogin
Theme
Search
Your changes has been saved.
Advertisements
In This Life, I Will Raise You Well, Your Majesty!

Home >
Novel >
In This Life, I Will Raise You Well, Your Majesty! 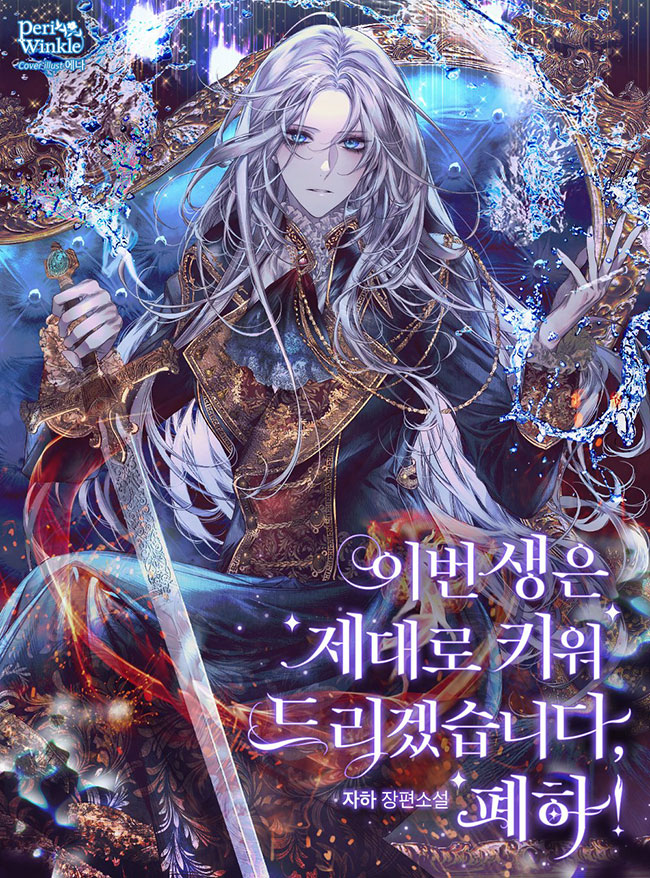 One entry per line
자하

One entry per line
Kakaopage
Periwinkle

She gave her all to make her son, 3rd Prince Leon, emperor. On the day this dream was fulfilled, she went to the place where the emperor’s coffin rested, where she found her son dying from the poison he had drunk himself.

“I… have never been happy in my life.”

Only despair was left for Elisha, who was holding onto her son’s cold corpse. “Leon…”

However, after losing consciousness, she woke up to find that her young son was looking at her with his lovely face!

“If this isn’t a dream, if it’s a new opportunity… I stole a lot of things in the name of doing it for you, so if you ask me, I will do whatever you want.”

Elisha, who vowed to become a good mother in this life, instead of piling up dead bodies and squeezing blood in a war to claim the emperor’s throne, makes a different choice from the past by weaving ties with her stepson, the crown prince.

These are recommendation lists which contains In This Life, I Will Raise You Well, Your Majesty!. You should give them a visit if you're looking for similar novels to read. Alternatively, you can also create your own list.
More Lists >>>

In the past life, MC too focused with her goal, not realizing that her son was lonely and don't eant anything related to crown. MC is raised in abusive environment before her master took her, so I think it's understandable how she lack emotion and parenting stuff, and she can hardly read situation which many nobles mock her that she's good for nothing dumb gurl who only good at her apparance.

Next is our lovely baby Leon : (I love him sm ugh. He's cute and really love his mom. Didn't want his mom to be dissapointed, and gets mock bc of him : (he's a lovely baby, no—he's an angel.

Next is assensio (son of deceased empress and MC stepson who also the crown prince) he's a mature baby, wit I feel so sad for him, he's lonely and lack of affection from his parents, fortunately MC (and Leon ofc) is there to give him warmth

[collapse]
I DON'T WANT ROMANTIC INTEREST/ML I ONLY WANT MC-BABY LEON-ANGEL ASSENSIO. IF the emperor is a duckin ML, I'LL IMMEDIATELY drop, I don't fridgin care if he have sad past or whatever that makes him inhumane (I'm sick of it and it'll be very disappointing tho : (bc it'll going to be the same to some cliché genre again lol) plus now waiting quietly for spoilers in NUF ugh. <<less
12 Likes · Like Permalink | Report

I'd rate this one star but it's early and it might get better. Currently, the writing and the writing style are abysmal. The text is nothing but one sentence paragraphs and dialog with nothing to indicate who is speaking or context to make the overall text coherent. What's worse is the author is trying to condense what should be at least a novella (the events of life 1) into disjointed fragments of a chapter. It's bottom of the barrel writing, at best. Here's hoping the rest of it improves
7 Likes · Like Permalink | Report

I guess I just can't accept how Elisha followed and married the emperor because she fell in love one sidedly even knowing he already has an empress.. Even if polygamy is accepted she just went up and did it without getting to know the emperor first (if I remembered correctly). At least she did not fight for affection afterwards like a desperate person. I really feel bad for Leon in the first timeline.. It could be said it's all Elisha's fault imo.... more>> Ascencio is also such a good brother to Leon. If Elisha and the emperor get together in the second timeline, I don't think I'll continue to read this. The emperor just tried to kill her and kidnap Leon. That would be messed up. <<less
6 Likes · Like Permalink | Report

Our MC overpower, she also smart and sharp. Idk, if there'll lovey dovey between MC and ber husband or not (bc this tag romance). But, so far the story looks like focus on her relationship with her child
4 Likes · Like Permalink | Report

With only those two chapters it caught me and I can say that I am liking it a lot, I will give it its 5 stars. The MC seems powerful and that is to my liking, not that it is OP out of nowhere, since it has its background and had its motivations, so I have no complaints about it, aside, the labels look quite interesting. I loved the narration, especially the count with the seasons of the year in the first chapter, it was a nice touch. The translation... more>> is already good and the story looks promising, I hope it continues to be updated, it goes straight to my list of novels in a row. Many thanks to Travis for bringing us this novel. Another thing I like is that
Spoiler

the King of fire appeared, that King is one of my favorites. I hope the MC will get him back on his now second chance or somehow stick with him either by being soul connected, through mana or something like that.

This is great but the translation can make things difficult to understand at times, but the translator goes out of their way to explain the situation in the TL notes after the chapter so it's not a huge deal. To be fair, the translation isn't bad at all, it's just that there's so much political speak where everything has a double meaning that it can be difficult to understand unless the translation is near perfect. The FL is really smart, was strong in the past but now she's probably on par... more>> or stronger than an above average knight. There's some fairly cute mother/son (s) stuff going on but it's not really the main focus of the story. This is a fairly well written and unique story, which is refreshing since it doesn't use the same tropes over and over again like most other Otome Isekai. <<less
2 Likes · Like Permalink | Report

Maybe its because I have a soft spot for women who do everything for their children but I truly admire and adore this MC. She is incredibly cool, smart, and more human than most protagonists so I'm excited to read more. Hopefully she gets a well deserved ending.
1 Likes · Like Permalink | Report

I say. I saw the 3 chapters but I cant rate it yet as it's too early. I was so confused at first. But I realized... her husband is an emperor who died who knows how. She ascended the throne by force (of course) and uses it to give "education" and "pathway" to her child. The child couldnt bear the cold and empty seat he was given so he killed himself on his father's tomb. That's all I have right now. I cant read deep korean and the auto translation... more>> guided me so yeah <<less
1 Likes · Like Permalink | Report

It's an interesting story with a unique protagonist who shows her emotions in a very subtle and unorthodox way. The best scenes are, of course, those happening between Elisha (the FL), Leon (her son and the third prince) and Asenscio (her step son and crown prince). To a point when the romance tag feels uneeded. Still, this is, luckily, not a romance-centered story. There are three potential love interests so far. Two of them have both good and bad points to them and their interactions with the FL. There's a fourth character... more>> who gets introduced much latet who might also fit into a love interest role. And theres a character who is so toxic, he is hands down more an antagonist than a love interest. Despite these prospective male characters, Elisha's interactions with them are more on the friendship (or frenemies) side than romance. So if you're looking for a romance centric story, this is not it. However, if you enjoy a smart, capable, strong, unique and active female protagonists driven by a beautiful motherly bond with (and a need to protect) her children, then do give this one a go. <<less
0 Likes · Like Permalink | Report

Came here from the manhwa and the manhwa is a bit better than the novel because the writing so far is abysmal. Let's see if this improves. I do like MC as she does everything for her child but it seems a bit too cardboard cutout right now
0 Likes · Like Permalink | Report
Advertisements
Leave a Review (Guidelines)
You must be logged in to rate and post a review. Register an account to get started.