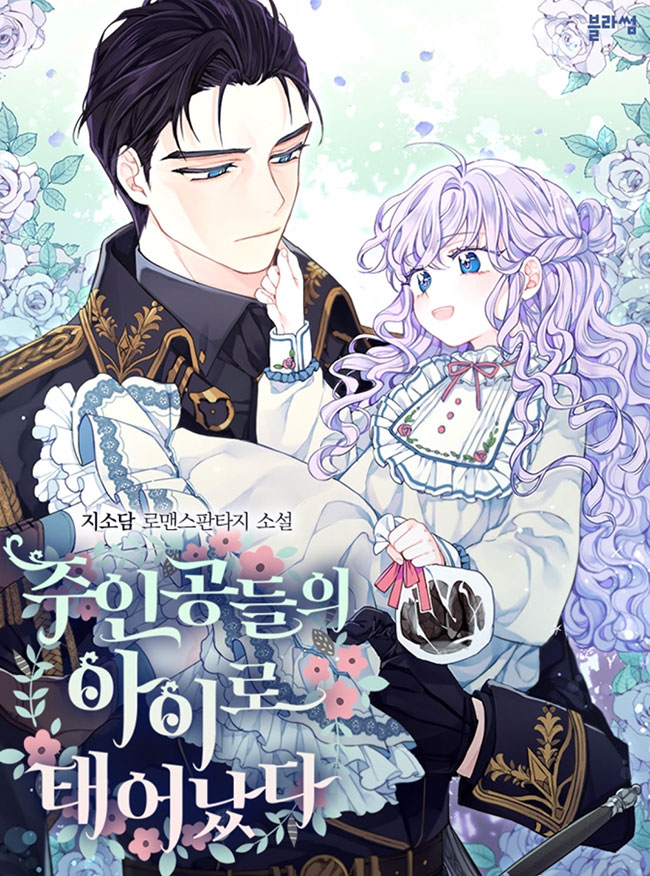 One entry per line
지소담

Status in Country of Origin. One entry per line
172 chapters (completed)

One entry per line
Blossom

One day, young Emiliette, who was bullied by her servants, suddenly recalls memories of her past life.

She had been reincarnated into a book she had read in her previous life, as a child of the main characters. Three years after the ending of the novel, her mother died while giving birth to Emiliette, leaving her father unattended with only his daughter left.

After the news of my father’s return came out, I decided to change the situation, but…

“Why is that thing in front of my eyes?”
– The first meeting I was looking forward to, ends with only a cold glare.
’…but I can’t give up!’

1. Frequent encounters.
“Hewwo Papa! Papa, where are you gwoing?”

2. Attacking with presents.
“Papa~ I’ll give you this. It’s a gift. Let’s be close friends from now on. I’ll come every day!”

3. Compliments!
“Ah! It’s so bright~ I can’t get close to Papa because he’s shining.”

But something’s wrong.
Even though he replies to everything I ask, his answers are…

“The office.”
“You’ve brought something useless again.”
– Yet you kept the useless thing.
“…shut up.”

He’s especially shy about compliments. Does he really hate me?

Suddenly Became A Princess One Day (1)
I Became the Male Lead’s Adopted Daughter (1)
I’m Only a Stepmother, but My Daughter is Just so Cute! (1)
The Baby Raising A Devil (1)
The Evil Empress Adores Me (1)
Baby Princess Through the Status Window (1)

These are recommendation lists which contains I’m the Main Character’s Child. You should give them a visit if you're looking for similar novels to read. Alternatively, you can also create your own list.
More Lists >>>

So im gonna give this one a low review right off the bat, with the full understanding it may very well get much better. I love the protagonist. I hate the dad. Daddy/Daughter novels have have become pretty common lately, and they share one key similarity: the daddy starts out as a villian. He did wrong and you have the right to hate him. Sometimes hes a psycotic murderer. Sometimes hes only a villian in the eyes of society. But it is generally accepted that he is a terrible or antisocial... more>> person that will be redeemed throughout the story by the love of family. This one tries to flip the script by making the dad a "hero" and expecting us and the protagonist to excuse his gross neglect and forgive him right off the bat for enabeling child abuse because he 'didnt know' and hes 'a good guy' The most unforgivable part is that shes 6yrs old & doesnt even have a name. Even the murder daddies gave their daughters names. Whats more, in the novels with a villian dad, the MC comes out of the gate with the understanding that she is *using* the dad until she is old enough to escape or get married or take charge of her own life. The family bond comes later and we get to see it grow organically. In this one, because the dad is given the arbritray title "hero, " the MC comes out the gate trying to make him love her, with the understanding she might fail and have to give up. its not a big distinction, but its an important one. By making these small changes (the dad is a hero and the daughter is desperately working for love 1st & material gain 2nd) it really emphasises the dads depression in a way that makes you want to slap him (rather than sympathize). Under no circumstances should a decent adult human being force a 6yr old to do all the work in mending their relationship. She shouldnt have to beg for love to not be abused. Thats a villians role. You dont get to call him a hero and expect us to just be understanding bc hes tragic. Everyone wants to watch a villian be redeemed, but no one wants to see a hero fall from grace. A hero is someone we would expect to have enough empathy for people to either raise their own child with extra love after the death of their partner, or leave them with another adult who can. Mental illness is real. Depression is real. Thats no excuse for the neglect of children. You expect heroes to know that. The fact that the story expects me to sypathize with him is offensive. He, at this point, has not done anything to deserve her love or forgiveness. Treat him like a villian and let us learn to like him, dont tell us hes a hero and expect it. <<less
48 Likes · Like Permalink | Report

Rated this as 5* to offset the low ratings. (Can be considered as a good 3.5* to 4* based on the premise) I'm writing this review since many people have liked the low-rated review. The bullies are sorted out in Ch 8,
Spoiler

When he realises something's off, he puts those maids in the dungeon first and begins to investigate. He comes to know that his servants blatantly lied to him (even the head butler & steward, who basically are second-in-command of the house). Later during the questioning, we are not shown their retribution, but the father is shown as very angry & spreading supposedly murderous aura.

The cause of bullying is that due to the father's s*upidity, the old servants (who followed his wife) had resigned and the newer ones thought that since the lord doesn't care about the kid, we can bully her. Once they are gone, the old servants return and take care of the MC

[collapse]
Reason for abandoning his lover's only child
Spoiler

The father is not s*upid, he doesn't have any emotions as mentioned in the original novel. And the one who led him to learn emotions is dead (MC's mother/his wife). He doesn't how to cope with this grief and has a very low EQ (As quoted in Ch 9). He thought everyone in the manor were caring for his child, so he was busy wallowing in grief. When he realised, oh wait, I've hurt her, he repents and regrets his actions [Ch 9]. Now, MC (his daughter) takes on this role and has him re-learn those emotions

[collapse]
Yes, I agree that the MC's proactiveness may seem normal to the reader (since she's a reincarnator/20-year-old), but from a normal perspective, the kid's far too precocious and is clearly trying to win his favour for a life of comfort. Yes, he's not a good father. He sort of acknowledeges his mistake and tries to be better. We can certainly hope for character development.
12 Likes · Like Permalink | Report

I haven't even read this yet, but I read the spoiler, and I don't agree with the (only) negative review out at the moment. If you read that and it made you hesitate, see spoilers below for the next few chapters (6-9). Dad had no idea the child was being abused: ... more>>
Spoiler

So according to the spoilers, he was off in war and got word from the servants that she was being raised right and treated well. Him keeping his distance, is because he was guilty about the MC's mom's death and he thought she would be unhappy if he got close to her.

When he finds out the servants were abusing her, he took care of them. It's not outright stated if he kills them or beats them or what, but something is done and they are replaced.

She did have a name, given by mom, dad is the one to tell her when she asks. Since it was summarized, I don't know how no one knew before he tells her, but there you go.

[collapse]
I'm actually kinda glad a story like this exists, and I plan to read it once more chapters are out. I skimmed one manga with this exact plot (can't remember the name besides that the dad was named Claude because he's becoming a meme, and I guess he was a villainous dad?) Thing is, when I read that story and read the comments people had about it, I had this thought. In all these fantasy romance manhwa/novels, the mls who are so deeply in love with their partners had the potential to become like Claude, (kind of because daddy Claude is a special case in some ways.) After losing someone they love in child birth, it may be difficult to get closer to the child due to a number of reasons, but mostly stemming from grief and guilt. Because I understand this, even though I can feel sorry for the MCs position, I can sympathize with the dads a bit too. Everyone deals with grief in different ways and it affects their relationship with those around them in different ways. Characters in novels also rarely get therapy (and most characters I meet really need it) so the development can get frustrating for the reader when you want everything to be fixed already because it's almost always slow. Anyway, it's a nice change to see the dad is the hero because we always imagine characters in romances live their happily ever after once the story is over and here's one book showing that this is not the case for all of them (but I'll keep imagining the happily ever afters because it's just depressing otherwise.) <<less
10 Likes · Like Permalink | Report

Liking it so far. I actually like the fact that the MC is so honest and blunt. Sometimes violent. It is the quite refreshing cause in a way, I feel like if I was in her position, I would just do similar things to her. The relatability to her frustrations is to my liking. *Spoilers* ... more>>
Spoiler

In chapter 1, she throws the shoe at the father who neglected her causing her to be abused by the maids. She is noticing potential in the father as he was the male lead of a romance novel. Chances are he is a nice guy is high and she didn't right-off the bad label him nothing but evil. So, that is something cool but she also didn't out-rightly get clingy either. So, would love to see the story progress.

So the summary isn't great but: An unnamed little girl remembers her past life. She is currently the daughter of the absent male lead, and is treated abysmally by everyone except her nanny. Once she remembers her past life she decides on interacting with her father to improve her and her nanny's lives. This is her story I enjoy this because the characters feel real.
1 Likes · Like Permalink | Report
Advertisements
Leave a Review (Guidelines)
You must be logged in to rate and post a review. Register an account to get started.