Novel Updates
RegisterLogin
Theme
Search
Your changes has been saved.
Advertisements
I’ll Save This Damned Family! 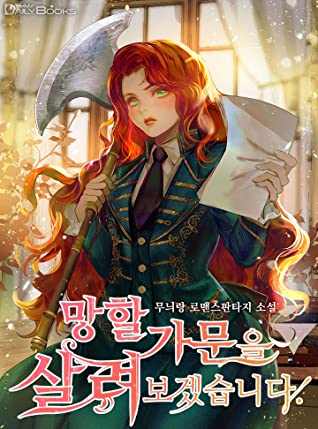 One entry per line
무늬랑

Status in Country of Origin. One entry per line
346 chapters (Completed)

Ji-Yeon Woo is a 33 year old scriptwriter that dies after trying to save an old lady from some thugs.
She transmigrates into her author friends’ novel as the fifth daughter of the Elias Family: Tara Elias.
Except her new family is doomed to be executed for treason after being set up!

Now she just has 3 years to change her and her families’ fate.

And everything may have gone smoothly if she hadn’t met the 2nd Prince, Kyle Amure!

Can Yeon Woo escape death this time around?

The Villainess Lives Twice (2)
In This Life, I Will Be The Lord (1)
A Stepmother’s Marchen (1)
The Viridescent Crown (1)
Your Majesty, Please Don’t Kill Me Again! (1)

These are recommendation lists which contains I’ll Save This Damned Family!. You should give them a visit if you're looking for similar novels to read. Alternatively, you can also create your own list.
More Lists >>>

Read to chapter 274+ via combo of MTLs, manhwa adaptation (adapted up to c113 of the novel) and edited/translated MTLs. I like this series so much that I am helping translate it! (Yes, I am very biased, I admit it, hehe) Highlights Plot This series is worth it! If are looking for a series with scheming and politics and a uniquely smart isekai FL this series is the one for you. Tara/Yeon Woo needs to work hard to gain the trust of her family, become a court official and prevent her family from being framed for treason. Her isekai knowledge is usually unhelpful (since she never liked the novel in the first place and was not paying attention, lol) and she does not give much of a crap about the plot unless it pertains to averting her family's imminent doom. The FL does not lose sight of her objective (even when the romance comes into play) and the plot is not just there to shore up the romance plot. I think this series involves some fun spins on common romance or isekai tropes. The FL is not dense as a brick when it comes to romance (Thank you!!!!) and ends up avoiding cliche while adapting some of the well worn tropes. There is a lot of scheming, planning and hard work that goes towards the FLs objectives and she is not a perfect schemer by any stretch, but she is clearly intelligent and improves as the series progresses. This series can be really dense plotwise, but is not as dense as The Villainess Lives Twice for example. It's also frequently hilarious. Characters Side Characters - I love them esp. Bernard and Beth. A lot of them have their own lives and arcs alongside the protagonists. One of the (many) best things about this series for me. FL - Tara/Yeon Woo Tara/Yeon Woo is a legitimately intelligent protagonist who also tends to mess up a lot along the way but slowly adapts and gets better along the way. She is a combination of very competent and hilariously awkward at the same time. One of the more divisive things about Tara's development is her weight loss plotline, but here it is handled well in my opinion. The weight loss takes time and is done for personal health reasons rather than out of petty fatphobia. This novel actually touches on the challenges of trying to lose weight realistically. The ML also does not care about her weight
Spoiler

in fact later on when she loses weight dramatically in a few months he's worried about her being in danger due to the lost weight!

[collapse]
Tara's family dynamic and repairing her strained relationships with them due to ogTara being a recluse for the past 7 years after her brothers death is a slowly evolving plotline that gradually changes as Tara evolves and proves herself to them. Most if not all of her family get development as the series progresses and it's very satisfying so far. ML - Prince Kyle Amure The ML, Kyle, is scheming as heck at first
Spoiler

with a big soft spot for the few people he trusts

[collapse]
. He comes in with his own political interests in vying for the throne and gets the FL caught up in it, and it takes the FL a long time to build a trusting relationship with him. I could write a damn essay on this man. The romance is great once it gets going around
Spoiler

[collapse]
I live for every moment these two are together I swear. I could say way more, but I won't. I DEEPLY love this series, so give it a chance!
8 Likes · Like Permalink | Report

This is honestly the best manhwa/novel I've ever read. The writing is great, the plot is intricate, yes, but so compelling, and all the characters are well-written. It both gives you the comfort of well-known tropes, but also manages to switch them all up. I adore the FL and the ML, as well as the side characters. 10/10 would recommend to everyone
4 Likes · Like Permalink | Report

Let me be frank when I say that this novel is NOT for everyone. If you are looking for a short paced romance with lots of fluff, this novel isn’t for you. This is typed as a romance novel and yes, it does mostly center around the romance between or ML, Kyle and our (incredible beautiful breathtaking perfect) FL, Tara. However, the main focus and the true drive of this story is as the title suggests. To save the damn family. This story is very heavy on plot, and for the... more>> first couple arcs, the romance is barely squeezed in but after that, their slower than slow burn romance soars and you get all these cute romantic moments which is made even better because their love took a goddamn long time to develop. The characters in this series are also given lots of love and are mostly quite developed. 1. Our leads💕💕 - I would waste everyone’s day if I were to speak on how much I adore Tara, our FL so I’ll cut it short by saying that she’s one of the most realistic approaches to FL I’ve ever seen. Strong willed? Definitely but she also knows her limits and is not afraid to step down when she knows she can’t handle something. This is a very good quality that it rare in novels, even rarer in real life. She’s also not a Mary Sue and has actively worked towards everything she has. Be it her body, her intelligence, her knowledge her strength, everything! This novel also has a very healthy approach to burn-outs and mental fatigue as well and while she is hard on herself, she isn’t necessarily s*upid enough to push her limits. The ML Kyle is very different from a good chunk of OI ML’s. He’s very practical and is genuinely cold hearted. He doesn’t look at our FL with rose tainted glasses and is very pragmatic. The romance between them is extra slow but when it hits, you’ll see parts of Kyle you’d never imagine possible 2. The side characters
- The side characters are pretty well written. A good chunk of them have their own goals and reasons and signature personalities. Every little character undergoes some sort of development in one way or the other. 3. The antagonists
- The antagonists (there are multiple antagonists as we progress further into the story) are all quite well developed, each and every single one of them having legitimate reasons and layers to them (except for maybe two or three minor villains). We have villains who are legitimately terrifying because of their intelligence, resources and charisma, we have villains who have good reasons for their actions, etc. <<less

I'm so happy this has been picked up! I love the manhwa and have tried to read this using mtl but the prologue seems well translated and I'm excited to get to enjoy more of Tara's journey!
I like how much of the story seems to focus on Tara and her own rebuilding of her life and family dynamics with romance coming in later.
3 Likes · Like Permalink | Report

Chapter 195. I'm the head of the small but great editing team from Thama's Edits. I chose to edit the MTL's from this light novel for the pure love of it. And even created a website for it.... more>> I think that should explain how deepis my love for this work..... But why? Fantastic Main Charaters: This is one of the rare light novels where you get to see both the FL and ML's inner thoughts and process.* Which turns them into equally important characters so we have 2 Main Characters instead of the central focus solely on the Female. Their relationship they build along the pages is realistic from a time and circumstancial point of view. No falling in love at first sight here. Communication!!!!!!! From their witty banters, to no pulling punches, to real couple exchanges and digging for answers from the other when they aren't satisfied with the other, it's such a relief and sooooo satisfactory to read! Developped Side Characters: A lot of the side characters have... well.... Character! They evolve and aren't just stereotypes, except for one or 2 "small and mid level bosses". Each have their moments to shine through, giving them purpose and life and not be just extentions to help put the MC's forward. The Story: You'll need more than 2 brain cells for the political issues and intricacies but it is very well written and compelling and an integral part of the MC's evolution and progress. It has impact that reaches far and wide and you follow the consequences throughout. The Romance: Finally!!!! A very realistic slow burn romance. It takes time to build, but it has deep reasons to do so that are logical and well thought out. And once it's starts, it's still slow going until
Spoiler

[collapse]
but you will discover and fall in love with one of the best couples ever written in a light novel. The Villains: You'll love to hate them and look forward to their comeuppences. And the main one is creepy enough to give you shivers... I hope you'll enjoy this story as much as I do! <<less
2 Likes · Like Permalink | Report
Advertisements
Leave a Review (Guidelines)
You must be logged in to rate and post a review. Register an account to get started.