Novel Updates
RegisterLogin
Theme
Search
Your changes has been saved.
Advertisements
I Will Not Accept Your Future

Home >
Novel >
I Will Not Accept Your Future 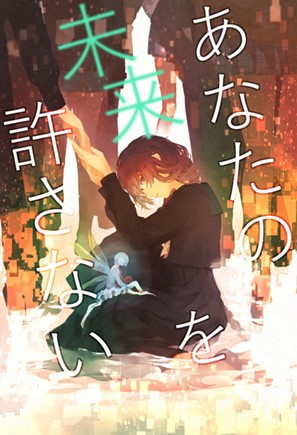 One entry per line
Syousa

Status in Country of Origin. One entry per line
98 WN Chapters (complete)

Links are NOT allowed. Format your description nicely so people can easily read them. Please use proper spacing and paragraphs.
[It’s a violent yuri that has people dying and killing] “I’ll fall down to hell. If that would save the child, that’s nothing but a cheap price.”

Mido Sayoko, a female high school student who is not good at sports, studying and personal relationships. One night, she was selected by future people from the 27th century as an experimental body called [Opponent], as teaching materials for a university class.

Special abilities were given to kill each other, but Sayoko’s ability were neither nullification nor elimination ability, it was really [Nothing].

Sayoko struggles just to survive every night with there having no way to fight against an ability person. However, after a certain night, she decided to fight.

…To kill all opponents, including herself, except for one person.

One entry per line
あなたの未来を許さない

These are recommendation lists which contains I Will Not Accept Your Future. You should give them a visit if you're looking for similar novels to read. Alternatively, you can also create your own list.
More Lists >>>