Novel Updates
RegisterLogin
Theme
Search
Your changes has been saved.
Advertisements
I Was a Small Fish When I Reincarnated, but It Seems That I Can Become a Dragon, so I Will Do My Best

Home >
Novel >
I Was a Small Fish When I Reincarnated, but It Seems That I Can Become a Dragon, so I Will Do My Best 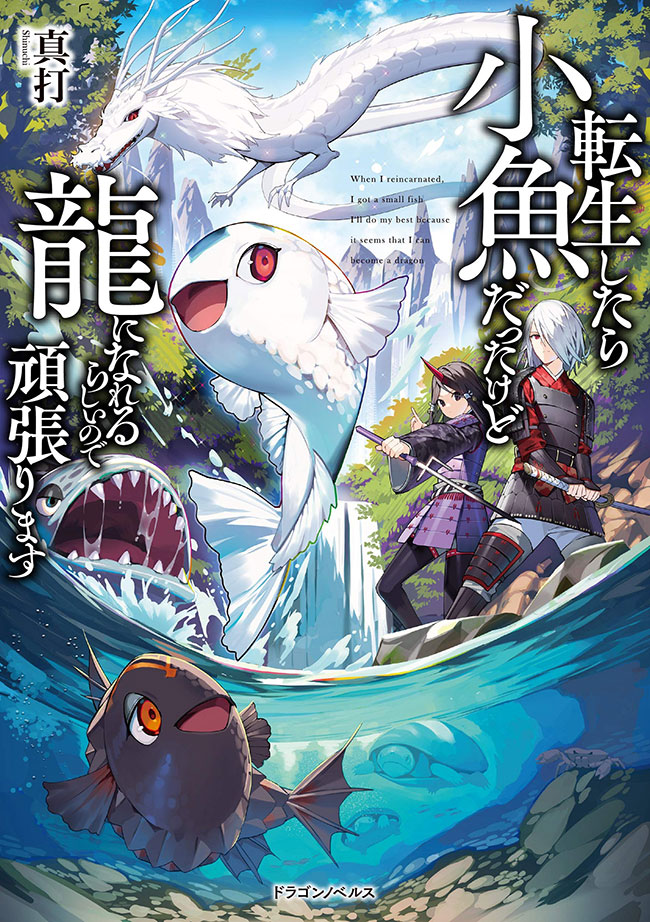 One entry per line
Mo
藻

When I woke up, I was in the shape of a fish in the river.

Why did I look like a fish, and who am I in the first place?

While leaving only the memory of being human in the previous life and being puzzled by the loss of all memories of himself, the days of hunting for prey to live in the world to live have begun.

And it seems that this small fish can become a dragon as it evolves.

When I heard that from the skill of “voice of heaven” and had the purpose of living, I went to enjoy this world.

This story is about a small fish aiming to become a dragon.

Kumo Desu ga, Nani ka? (3)
I Was a Sword When I Reincarnated (WN) (2)
Reincarnated as a Dragon’s Egg ～Lets Aim to Be the Strongest～ (2)
Apotheosis of a Demon – A Monster Evolution Story (1)
Black Iron Magician (1)
Free Life Fantasy Online (1)

These are recommendation lists which contains I Was a Small Fish When I Reincarnated, but It Seems That I Can Become a Dragon, so I Will Do My Best. You should give them a visit if you're looking for similar novels to read. Alternatively, you can also create your own list.
More Lists >>>

... it's complicated, honestly. At one side, sometimes I like the MC personality. At the other side, ... more>>
Spoiler

He's so damn irresponsible, caused many casualties that shouldn't even happened IF ONLY HE ACTED LIKE A RESPONSIBLE PERSON WITH PROPER BRAIN!!!

At one time, the entire country almost fall because he found a fuxking devil yet did nothing because HE HAD FUN PLAYING AROUND like, IT'S A FUXKING INVASION AND HE ACTUALLY PLAYED AROUND and almost caused hundreds of death.

He also found a sign that his acquaintance was attacked and, you guess, what he did? HE DID NOTHING! BECAUSE HE THOUGHT IT'S NORMAL!!! HOW THE HELL BEING IN GRAVE DANGER IS NORMAL FOR A NORMAL GIRL!?!?

Then in the end, look and behold! He relied on plot armor; basically his friends, wept clean the sorry mess he should be able to prevented but decided not to because he was a fuxking irresponsible piece of sh¡t.

[collapse]
Vol 1-4 is still OK. The rest are going downhill like a person riding mountain bike with no brake nor any safety net. Holy sh¡t. Only read 5 Arc so far, yet MC is still untouched by reality, taking all this business as an observer instead of the one truly living in that world. So far he found 2 reincarnated person, and even so they're much more..... "grounded" compared to MC. It's kinda hard for me to connect with such an a$$hole, honestly. I'm struggling to give it more than 2* but whatever, I'm feeling generous today. <<less
26 Likes · Like Permalink | Report

Good first arc I never understand why authors lure you in with evolution novels only to drop the premise after the first arc. I wanted to see the fish MC continue to improve and evolve, facing difficulties and meeting people. However the author basically drops the MC. He doesn't evolve and isn't the focal point. Instead the story becomes a very slow paced politics novel. Coupled with some weird character decisions just makes everything less enjoyable.
12 Likes · Like Permalink | Report

it feels like the MC is infantile. The English translation is quite bad. There are a lot of filler words/repeated statements. MC doesn't seem to have any testosterone or estrogen, if you know what I mean. The MC claims to have a human mind, but is about as intelligent as a fish. It was tedious to read.
10 Likes · Like Permalink | Report

this is an early review. It reminds me of Kumoko's early days in kumo desu ga, nani ka. The tension is not yet apparent though, so what the author intends (either slow life living with cheat or survival story) I still don't know. I'm willing to give it a try though. the premise is the legend of carp that evolves into a dragon (think magikarp-> gyarados if you are a fan of pokemon).
7 Likes · Like Permalink | Report

NOT a Evolution Novel. No evolution after the first arc where the novel totally drops of a cliff. MC can get Level through killing in human form and eating in monster form. Does he do any of that in 120 chapters? Nope! I can only remeber one sentence in which his level is mentioned and he is surprised because he didnt know that his Level is so low. That makes the part where he actually evolves worse because the author went all out there, felt like an evolution every 3 chapters. ... more>>
Spoiler

He fights an s-ranked adventurer, MC would have totally died if his isekaid companion didnt magically appear. Not a single word about evolving to get stronger after that.

When he can evolve from a fish to a snake he leaves behind his isekaid companion. After they meet again his companion tells him he took a whole 3 days to evolve into a form that can go on Land.

I dropped it around chapter 200, the fought through a whole s-level ranked dungeon and nobody seems to level up once, im sure the author will grant these levels retroactivly when the plot armor is not thick enough.

This actually pretty good... It a fresh slice of life type where you enjoy the flow instead of repeative fight. Take a cup of tea then relax and reading this.
2 Likes · Like Permalink | Report

The way it's written is really weird and cringey. It's filled with very weird one liners and feels like the author is trying really, REALLY hard to be funny. Translation has some issues too, but it isn't the worst ever. Quite a few author notes too which is a bit annoying.
1 Likes · Like Permalink | Report
Leave a Review (Guidelines)
You must be logged in to rate and post a review. Register an account to get started.