Novel Updates
RegisterLogin
Theme
Search
Your changes has been saved.
Advertisements
I Want to be Alone, Beautifully

Home >
Novel >
I Want to be Alone, Beautifully 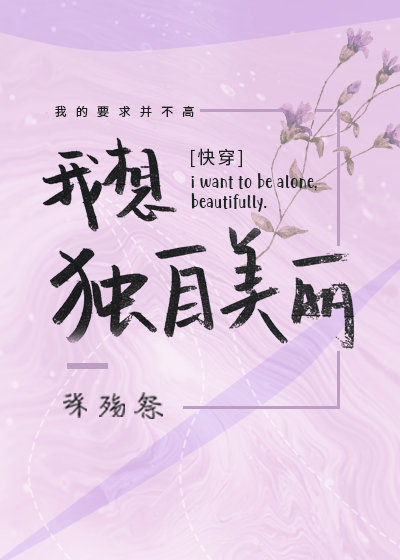 One entry per line
柒殇祭

Status in Country of Origin. One entry per line
163 Chapters (Completed)

Xu Jiao, the terrifying stepmother-like author of dog-blood plots, has made countless pits in her life, and finally suffered retribution for the deaths of the protagonist in her books.

System: “Since the content of your article does not conform to the core socialist values, please cooperate with the system to make corrections.”

System: “The heroine in front was bullied by a neighbor at the corner. Please help in time so that she can feel the care and love of socialism.”

Xu Jiao: “I know this question. As long as I show up in front of her to scare away the gangsters, I will become her best friend from then on.”

Soon after, the system: “Successfully saves the heroine, gains +1 for favorability and +1 for blackening.”

System: “The heroine in front is harassed by a domineering boss, please help in time.”

Xu Jiao: “I will do this too! As long as I help her get out of the clutches, drive away the villains, and then tell her what true love is…”

System: “Sorry to inform you that the final rectification failed.”

Xu Jiao shivered as she watched the approaching female host with a blackened aura, “Don’t tell me… I, I, I have to run first!”

One entry per line
我想独自美丽[快穿]

These are recommendation lists which contains I Want to be Alone, Beautifully. You should give them a visit if you're looking for similar novels to read. Alternatively, you can also create your own list.
More Lists >>>

Currently reading this and so far it's very good. If you want a full fluff story, you probably won't find it here. In fact, the MC is a real d*ck at the beginning but throughout the story, we understand her motivation and character more and more. I gotta say, our MC sure loves to write torture p*rn xD I probably can't read her works if they are real cuz I'm such a soft bean lmao.
0 Likes · Like Permalink | Report

Looks good so far. I'm currently waiting to see where this story is headed. Until then, review will be 5.
0 Likes · Like Permalink | Report

Translator here! This story is a quick transmigration novel where the MC has to go through the books she herself wrote to save the heroines from their tragic fate. The reason why she has to do that? Well the MC likes to write abusive and tragic stories where the heroine has to go through a life of pain before ending in tragedy. That pissed off her readers and so the system is taking her through to fix the endings. That's just the surface reason of course, the real reason is... more>> something that is revealed later, and it's a much sadder reason that honestly made me cry. I'll put a word of warning for the romance though. It's very toxic in the first few worlds. The relationship between author and heroine is very strained considering the abuse the heroine went through in the original plot. The heroine has the same soul through each world and she blackens in most of them despite the MC's intervention. That's deliberate and is essentially revenge for the suffering the heroine went through. Despite how bad their relationship is in the beginning, it's the journey to the end that really moved me. The MC grows from the cold and apathetic self in the beginning to finally living happily in the end. The heroine rediscovers herself and they reach a happy ending through their trials and tribulations. I think it's pretty inspirational but you have to read it to the end or else you might hate it based on what it seems on the surface. This novel is probably in my top 5 favorite baihe novels so give it a try. <<less
13 Likes · Like Permalink | Report

AHHH I FINALLY FINISHED IT!! I LOVE IT SO MUCH! T_T THE TRANSLATOR HAVE A GOOD TASTE HUHU This is a slow burn romance, so you need a lot of patience when reading this novel. Don't worry because your long wait will be fulfilling. Hmm... I don't think this novel is for the weak heart. The start is quite messy and sad but it gave a bunch of guilty pleasure HAHAHHAHA! At first, the female lead is obssessed towards the Main Character while the MC is cold and apathetic towards her.... more>> So just imagine how toxic their relationship is. However, it will get better as the story goes. The MC will slowly notice and love our FL. I assure you that every arc is very interesting, but of course you'll have a favorite. The author will insert plot twist every now and then, so you wouldn't be able to stop reading it. You'll be more invested if you love yanderes xD the FL is yandere asf when she reaches 100% blackening lol. Anyways, the writing style of the author is so beautiful 🥺 She uses flowery words, and you can tell how good she is. (Note: She uses flowery words during NSFW scenes too *drools*)
Brief Summary: The MC was forced by the system to change the ending of mc's abusive novels. She followed the system's instructions, but unexpectedly, the heroines were still blackening. What's more, all of them became obsessed with her. *tut* Yandere detected
Spoiler

I want to add spoilers, but I don't want to ruin the story LMAO. I'll just put a brief description for every arc

Bridal chamber with you: (cultivation world) The MC is the senior sister of FL

Green Plum: (modern society) The MC is the top 1 gangster of the school while the FL is just a poor girl

Don't want to get divorced: (omegaverse) The MC (omega) and FL (alpha) are actresses, and they are married.

Your preference: The MC is a god, and she favors the FL

My wife: (Horror) The MC became the wife of a ghost (FL).

Give you the country: (Historical) The FL is the female general and regent who controls the country, and she chose the MC as future emperor.

See you at first (Ending) : The truth will be revealed.

A story about happiness: (Fanwai) The MC tried to make up her past mistakes in the first worlds.

[collapse]
I love yanderes, so I enjoyed this even though it hurts to read the first arcs XD The NSFW scenes are intense too *nosebleeds* <<less