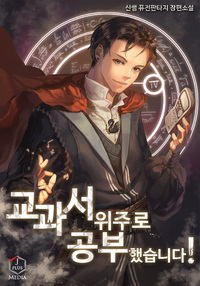 Status in Country of Origin. One entry per line
154 Chapters (Completed)

Kang JiWoon is a mathematics teacher that barely scrapes by as a yearly contract teacher.

Magic? What the! Isn’t this just simple maths?

But these people didn’t even know the quadratic formula!

Casting time less than 1 second! Screw talent! I have the Casio scientific calculator!

These are recommendation lists which contains I Studied Mainly Textbooks!. You should give them a visit if you're looking for similar novels to read. Alternatively, you can also create your own list.
N/A

So the first point of the story to consider is the guys life more or less sucks. He's in debt from college, only has a temp 1 year contract for work and still doesn't have a teaching license yet is covering as a temp teacher while the real ones on maternity leave.

Though this is your typical novel of once you get to a world where your life is much better all you think about is going back home to the hell you knew. I'd say from the first 22 chapters this series is only a 3/5 at best. Typical story, typical arrogant MC who looks down on others and talks about how great where he came from is. Even though based on how the story is going as of the 22nd chapter things are changing more violently, but he's got magic. A world where power dictates everything and you're handed a golden spoon is far better than poor and useless in this world.

Wow its surprisingly pleasant to read. Altho its just release today, its interesting concept to read. Story start with otherworld transmigration of MC into world with magic but had math that fall behind than earth. And magic over there need calculation on casting. Our MC who are math teacher, would easily solved a math as expected. Then he began to learn magic so he can transport himself back to earth. No harem cliche so far (Hope not). My slightly problem would be theres no clear detail of magic level but... more>> honestly its no problem to read the story. With interesting premise, world building and likeable MC (theres comedy too) im looking forward to this. <<less
5 Likes · Like Permalink | Report

Finally, a good novel pop up!! There are less bullshits than I expected from these type of story. The MC is a Korean math teacher who got summoned by an old archmage experiment with magic. The story keep out most of the boring stuffs you usually see in other novels and for that I am very happy. Spells are interesting and a lot more hilarious than those usual spells we see everyday. I look forward to reading the next chapter
4 Likes · Like Permalink | Report

I really hope someone pickup the novel as it is really good.... This satisfaction tho short and no edit but was fun to read as we are looking through the life of Calculation Slave LMAO!! Chamber of Secret Kek, well played and thx alot Chamber-nim for all the novel you translated before going national/military service
3 Likes · Like Permalink | Report

I really liked this novel, and I really hope someone will pick it up. This novel has been on Chamber's discord server for a while now and the latest translated chapter right now has been translated a few months ago (on march 15 to be specific) and I hope this catches the interest of a translator looking for a new project. Unfortunately, my favourite Korean translator, Chamber will be in the military for approximately 2 years starting on July 9 (yes, it's official this time). Also, don't blame Chamber for... more>> not releasing GoM a lot. The site doesn't have ads, he doesn't do sponsored chapters, and there's no patreon either. And Illi is too busy being a riajuu. Blame Illi (totally-not-biased). Anyway, no one knows if this novel will be picked up, so if you don't want to be left hanging and waiting indefinitely (like me), you should wait for someone to pick up this novel (I bet this would be quite popular). If you are reading this Chamber (knowing you, you probably are), for the tenth-ish time, I wish you good luck and would be glad to (hopefully) see you again after 2 years. (￣ー￣) ゞ <<less
2 Likes · Like Permalink | Report

Honestly the idea is briliant but not put into good used. The only Saving Grace in this Novel is Reina. (Good Character.) I also like Kyle he's smart but kind. I don't hate the MC 'energetic' personality but his thought process is too childish. He's short tempered and not really a shred of intelligence. There's just no balance in the story. Despite this he keeps calling himself an Adult! I can't really judge this Novel since there's too little information now but hardly anything been accomplished and there's already a Time-Skip.
1 Likes · Like Permalink | Report

Well the story wise most of the things that we could see here are the most commonly used troupe on a transported to another world genre of a novel. But disregarding that fact, the author still managed to write a good and interesting story that is easy to read and get hooked by it.
1 Likes · Like Permalink | Report

This is a simple story that's easy to read, nothing deep about it. I recommend it for whenever you need some low-calorie fare to pass the time with. The one issue I have with this story is that it doesn't follow though with its gimmick: math. The premise is that a math teacher is summoned to another world where he discovers the magic system there relies heavily on assorted math formulas and techniques. It's a stretch, but I have no problem with the other world's mages having it hard because they... more>> only have a primitive concept of math and can only make-do with add/subtract for their calculations as they cast their spells. The problem I have is that
Spoiler

after 22 chapters so far and the MC having published several research papers at a prestiguous Mage Journal (hand waving time skip with that), the author has yet to clearly layout where and how calculations are even used in spell casting. What are the input variables for the spells? I'm assuming they're different for each spell or spell type. What's changing such that a spell NEEDS to be recalculated every time it is cast?

That said, what information are these calculations even supposed result in? Is it just a single calculation for a spell or multiple? How does the result fit in the spell casting? Nothing is explained.

In the story, the MC just shouts the spell name to cast his spells (the amazingly fast spell casting as perceived by others). Presumably, he's doing the calculations in his head. Yet, take space magic as an example. Shouldn't the calculations for space magic be difficult? Yet, when he uses space magic offensively in a life or death battle, all he seemingly does is shout the spell's name to invoke it. Where is the math?

For more complicated spell forumlas, when he's not fighting for his life, he's got his Casio calculator with it's built in scientific functions. The treatment of his calculator in the story is odd too. I would have assumed he would treat his calculator as super secret, but he has no problems with whipping it out amongst casual friends. Friends who conveniently ignore it right after their initial "wow! That's cool" reaction. In addition, there's no thought about preserving the easily lose-able calculator. If it was me, one of the first things I'd do is to make hard copies of all of the calculator's saved formulas and programs.

You could just replace the "math" for this story's gimmick with anything else and there wouldn't be much to adjust in this story.

Why you no release god of music and destroy hopes by uploading new projects. If only you were as enthusiastic with GOM as you was with Every one else is a returnee.... And now the review. What I like.... more>> I like that magic is directly related to calculations rather than a system of chants. I like the old mans nature. He who has lived long knows how to smile. I like that the novel started slow with no battles until we become familiar. What I dont like. The conversations and the reactions. The conversations are still okay, but there are no desceiption of emotions. While the reactions are simply dull. Like a kid reading a book with no emotion. I dont like that the magicians alrhough talked about calculating positions and distances, but the world has no '0' concept. <<less
0 Likes · Like Permalink | Report
Leave a Review (Guidelines)
You must be logged in to rate and post a review. Register an account to get started.

A Wonderful World of Woe
Advertisement