Novel Updates
RegisterLogin
Theme
Search
Your changes has been saved.
Advertisements
I Reincarnated as a Noble Girl Villainess But Why Did It Turn Out This Way? (LN)

Home >
Novel >
I Reincarnated as a Noble Girl Villainess But Why Did It Turn Out This Way? (LN) 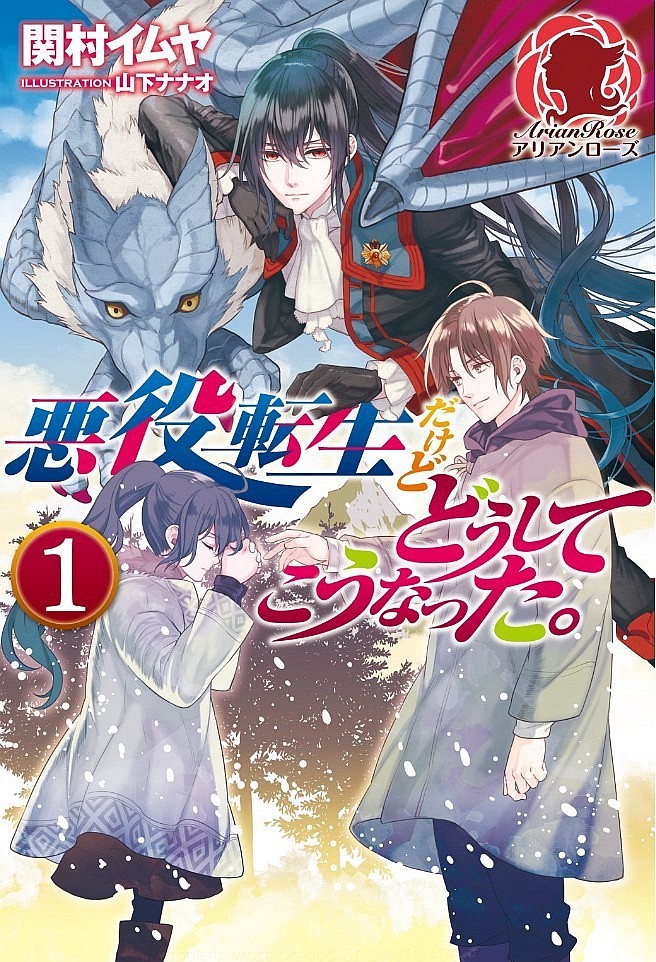 Status in Country of Origin. One entry per line
3 Volumes (Completed)

One entry per line
Frontier Works

Eliza Kaldia, who reincarnated as a noble girl villainess in a fantasy otome game, was stuck in a world that seemed far from her image of how noble girls should be living, as the fated events of the game were still far off while she remained a child. In the first place, it was suspected if she could even live to make it to the school setting of the game. Due to changes in the situation of the neighboring country which never appeared in the original game, the world became nothing like the flowery school life from the game. It was a world where even young girls had to take up weapons. How did it turn out this way…

I don’t have any cheat-like abilities. I can’t use magic. Though, my sense of ethics might have become a little twisted due to being reincarnated.

I Reincarnated as a Noble Girl Villainess But Why Did It Turn Out This Way? (WN) (Web Novel)

These are recommendation lists which contains I Reincarnated as a Noble Girl Villainess But Why Did It Turn Out This Way? (LN). You should give them a visit if you're looking for similar novels to read. Alternatively, you can also create your own list.
More Lists >>>

This is quite a good find. Their is an aspect of realism. Such as the peasants hating her. But the hate may be a little exaggerated.
Spoiler

If the ML is the prince's friend from the prologue, I completely support him. However if it is Kamil then he is definitely a pe*ophile.

A pointlessly melodramatic and gloomy story. This story is mostly about the unjustified guilt and self-hate of the main charcter and how she is constantly abused by men of all ages (maybe in later chapters we get women as well) while feeling she deserves the abuse. If that doesn't sound fun or exciting... I'm with you there. There will be spoilers from here, but not very significant ones.
... more>>
Spoiler

The basic premise is that the MC has memories of the world from playing a game in our world so she awakens, at the age of 1 or maybe 2. Her parents are feudal lords and are comically evil, torturing peasants all day long, probably raping their corpses and so on. The joy. So she poisons them and they die... at the age of two. A child that can't walk well and her brain isn't developed enough to understand lies decides to secretly poison her parents... and it works.

The story skips forward to her being 6 and she is undergoing spartan training with the normal soldiers which beat her up daily as training, because everyone hates her. For months she is beaten daily until she collapses, throws up and usually falls unconsicous to then later drag herself to hunt for bugs and lizards and non poisonous grass for lunch and dinner. Obviously she would die after two-three weeks, but nevermind. She likes it, because she feels she deserves it.

Why does she deserve it ? Two reasons. One, she killed her parents and that is wrong in general. Which is true, in general, but surely shouldn't apply in this case. Here is the real kicker though, the second reason she hates herself, is because she hasn't killed them quickly enough... Isn't that a mind twister ? For some unfathomable reason she blames herself for the people her parents killed since the day she was born untill she killed them...

I just don't understand the logic. If she is to blame by association due to her blood, then she is guilty of all the people they ever killed. If she isn't and this is about her actually being alive, then she is one of the least guilty people in existance for the victims in that period of time. Who had less power to stop the tranasgressions of the fief lords than a goddamn baby ? She didn't even actually benefit from them, because not being abused is not a benefit. Being a baby that is provided with food is also not a cause for guilt. Any person above 13 and surely above 18 is guiltier simply for having agency. Not to mentions the people whose actual responsibility it was to confront the lord like local peasant leaders, the local priest, the knights, the local milita, the king and so on. Presumably the milita took part in the abuses, are their childern guilty too ?

I don't understand how she could have "awoken" to her previous life with all the relevant memories and sensibilities and still come to the conclusions she did. It is also very weird that she is both very mature and very immature at the exact same time. She is wise enough to successfully plot against her parents at two, but she doesn't understand how to communicate normally with people and is being constantly misunderstood, which leads to horrible results. Everything is very "convenient" to be the most depressing, but there is nothing of actual worth in this story.

If she was 12 and she loved her parents even though they were torturing peasants, then I could see some intersting internal conflict to be considered, but she doesn't. She hates them, since they are comically evil. The only thing they didn't do, is directly abuse this one baby, the MC, and I'm willing to bet even that isn't true and there is some horror to be revealed in the future.

Of course everyone around her is equally gloomy and edgy... I mean, "tragic and mysterious".

[collapse]
The translation is not particularly good as well, it is quite awkard at times. Since a lot of this story is about the internal workings of the main character's broken mind and her self flagellation the fluidity and clarity of the translation really matters and it isn't quite there. <<less
7 Likes · Like Permalink | Report

Overall rating for the LN: 4.5/5, very unique and different from the standard otome isekai reincarnation stories and well worth a read if you're into dark, gritty, and tragic narratives. I don't usually write reviews – in fact, this is actually the first time I'm writing one, simply because I noticed that the reviews for the LN version of this are very sparse, and I always find that reviews are an excellent source of information to determine whether or not I want to read something. So hopefully this helps someone make... more>> a decision on what to read. First things first – see that tragedy tag over under the genre section? Yeah, that's not for show. The MC of the story suffers, suffers, and suffers some more in a world that starts out as exceedingly harsh and unfriendly towards her. She suffers from both physical and mental handicaps in the form of a young body and mental trauma from her past, and in the beginning can rely on nothing except her own willpower and guts to push forward. Quoting user AC253's review over on the WN page (I recommend reading it, as what is written there applies here as well) : "There are three tags that will mislead you, and they are: otome game, reincarinated into a game world, and villainess noble girl. If you want to read something light-hearted and sweet, you will not find it here... a dark fantasy with much dialogue and thoughtful conversations, it's slow paced but makes for a fantastic read if you want something plot heavy... There are diseases rampant. Magic not being recklessly used? Wars actually happening? People being abused, treated as sex-s*aves, and being cruel? Oh. Can it be... this is actually something semi-realistically serious...?" Yes, there is a WN version of the story, which most likely you've already noticed if you're on this page and reading this right now. There is a significant plot divergence at the end of volume 1, so you can consider this LN of retelling of the story in an alternate timeline, but overall the structure of the plot, events, and tone are still extremely similar. I would actually say the LN version is slightly less dark than the WN version, with some scenes and violence being toned down somewhat (probably for official publishing reasons) and certain plot points being skipped over altogether, although that can be attributed to the plot divergence. The story can actually be considered completed in the LN at the end of volume 3, as the way the story progresses provides a natural cut off at a spot that wraps up the majority of plot threads due to the plot divergence from the WN.
Spoiler

Basically, it cuts off right as the otome game events would have started.

[collapse]
However, the WN, which is still ongoing, proceeds further past this point and I think is worth a read as well because of the major plot difference (I actually like the WN storyline better overall, personally, even if it isn't as polished as the LN). I like to think of as a gift from the author, providing multiple alternate endings for a single story. So if you're looking for a dark, semi-realistic, gritty, and grounded (or at least as much as you can get in a fantasy setting) story that delves deep into the nitty-gritty of politics, war, and fief building, and where the character is forced to struggle, adapt, and overcome to achieve their goals, this may be a story for you. For me, it was a breath of fresh air from the now fairly saturated otome isekai reincarnation genre where the character simply isn't instantly handed the keys to the castle and the plot moves only for their convenience. <<less
5 Likes · Like Permalink | Report

After I read this I just think this is a
Spoiler

yuri undercover or maybe not, I just thought so bcs mc's inner dialogue im the end of the story, btw, I like the interaction between MC and kamil, and if this novel was a romance I support kamil although he was 12 years older then her

[collapse]
I feel this novel was real, and yeah they had many gloomy story that makes me understand why they behave like that
0 Likes · Like Permalink | Report
Advertisements
Leave a Review (Guidelines)
You must be logged in to rate and post a review. Register an account to get started.