Novel Updates
RegisterLogin
Theme
Search
Your changes has been saved.
Advertisements
I Played the Role of the Adopted Daughter Too Well 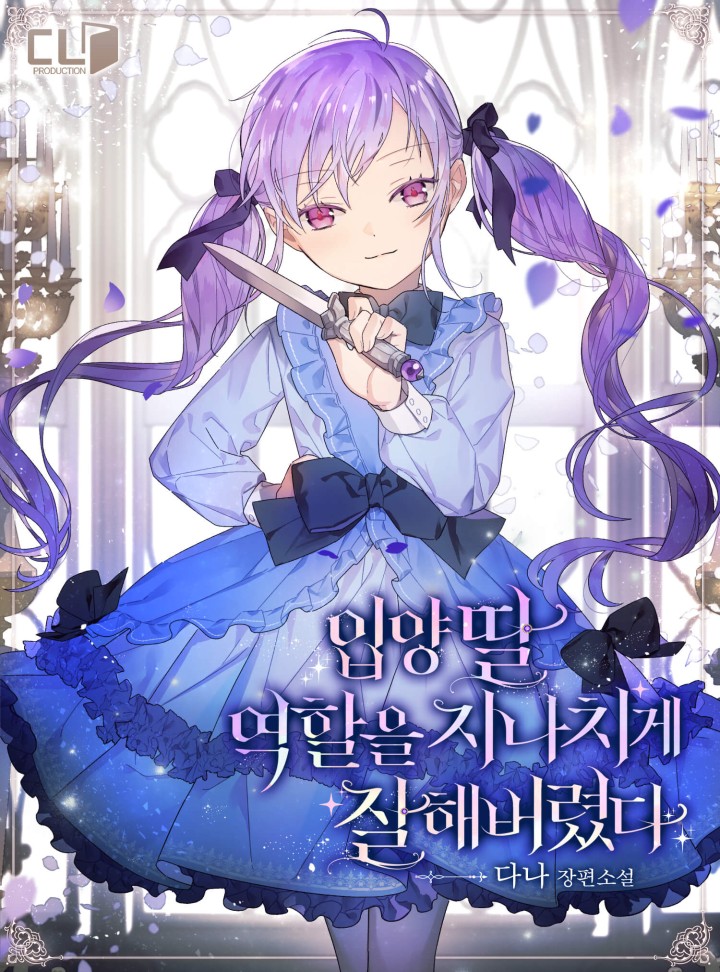 One entry per line
다나

Status in Country of Origin. One entry per line
201 chapters (completed)

When I first came into the book, my goal was just to survive.

I am going to walk on my own flower path.

“Wherever I go, the seat next to you is mine. You promised to pat my head for the rest of your life, isn’t that right?” The strongest male character, who was stabbed to death in the original novel, stared at me with obsessive eyes.

If I say no, he will destroy the world.

“Yes, I’ll kill him. Then you’ll be happy, too, right?” The fifth brother looked a bit crazy.

“This is my land from here to here. And yours, too. I’m glad to be able to breathe with your grandest dreams.” The fourth oldest sister, who became the richest woman on the continent, opened the map and said that.

If I say I don’t have such a grand dream like her, I think a catastrophe will happen.

“I’m looking forward to the Winter Solstice that you’ll rule completely.” Laughter rose on the face of the butler who served me.

“If you don’t connect to Verratoux, my heart will stop tomorrow morning. Are you sure you’re okay with that?” My first sister, who was supposed to be the original successor, threatened me with her life.

And this is the biggest problem. Somehow, a faint smile raised my father’s mouth, which became stronger than the original father he was. “Independence? Try it then. I won’t even let a single ant live on this land.

“Did you think you could leave my arms and stand on your own…” He then stared at me obsessively.

They are all acting weird.

I only did my very best.

These are recommendation lists which contains I Played the Role of the Adopted Daughter Too Well. You should give them a visit if you're looking for similar novels to read. Alternatively, you can also create your own list.
More Lists >>>

so far what I can conclude is all of the characters are sick on the head aka madman including MC MC is smart asf, I also like how she handle the situation, she pretend to be cruel and act so creepy for the sake of her life, she knew how to handle some hard situatin and how to treat the characters without getting out from her original character and I really admire how brave she is although she do feel scared as a normal person, she got some issues tho especially... more>> for the family part Tundra is the ML right? So far I hope so although I do like Vexin (older brother) and Xennon (the butler) both of them already started to showing their obsessive behavior especially Vexin, I think Xennon is great to be a assistant👌 <<less
0 Likes · Like Permalink | Report

Well, firs of all, I really love it. It's a pretty amazing story just by reading the current 5 chapters. The MC is acting so cool in front of them and I really am in awe. She's amazing! The family she was adopted into is... crazy, I guess? That seems to be the most appropriate word right now. But it just adds to its charm. I like it and it's not leaning too much into a dark story. And I gotta say, I love her butler, Xenon. Truly splendid!.... And... more>> terrifying. I hope this continues to be translated. I recommend this to those who like dark humor or something a bit dark but being shown in a light way, MCs who transmigrate/reincarnate as children, story surrounding family and pretty cool butlers. <<less
15 Likes · Like Permalink | Report

I think it's a mix of both the translator and the author's fault, but this story is confusing to read because it's hard to tell who is speaking. POV changes happen in random spots and pronouns get mixed up a lot (which isn't unusual for Mystical Series translations). Other than that, this story is just not my taste because it's too cruel. It's full of psychos, except in this story the characters seem to think that the more psycho you are the better.
10 Likes · Like Permalink | Report

I never wrote a review before but here it goes. This story is about MC inside a book she read and became the protagonist of the book. She got adopted into a rather unique family where it's basically survival of the fittest. MC can't kill anyone so she has to act like she's a psycho that kills anyone that looks down on her. This novel isn't for everyone but I personally like this type of genre. So if you like something like this, give this novel a try! ... more>>
Spoiler

I really liked the story and it has a similar atmosphere as "save the heroine's older brother" But the translation is a mess very often. I can't understand who adresses to whom with all the "she"/"he"/"I" mess. I'll update as the story goes on
3 Likes · Like Permalink | Report

I am liking everything so far. Recommended to read this one. Maybe I read a lot of novels so somehow I can guess what will happen next. But even though my guess almost always ends up correct it is a very enjoyable read 🥰
1 Likes · Like Permalink | Report

so amusing. the comedy is not the misunderstanding. It's the characters with absurd personality.
Spoiler

butler who willing to cut his hand off, to test a 7yr orphan girl. Using himself as base.

a mother who play s&m with his son, who is yandere his mom.

(this is my first time writing a review) the story is really good and interesting and all the characters so far have funny and absurd personality’s which makes the misunderstanding’s even more funny. The first few chapters are a little hard to read because it changes pov’s suddenly but you get used to it after a little while. Tip is to read it slowly. It’s almost like the way of protecting the female leads brother but it’s probably a step below because they actually care for each other. This... more>> statement is not from me in the chats lot’s of people are saying that and I agree. <<less
0 Likes · Like Permalink | Report
Advertisements
Leave a Review (Guidelines)
You must be logged in to rate and post a review. Register an account to get started.