Novel Updates
RegisterLogin
Theme
Search
Your changes has been saved.
Advertisements
I Became the Villainess’s Brother 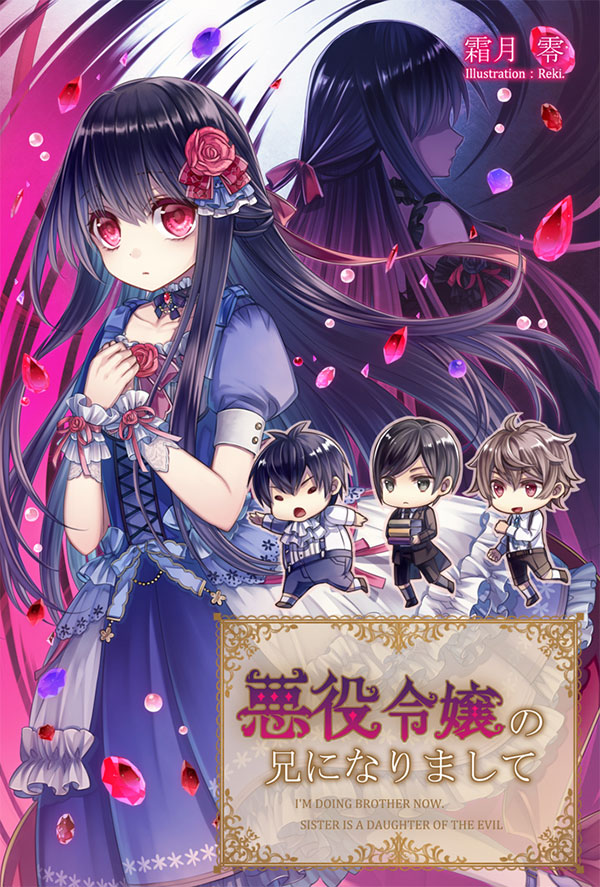 Having wandered the borders of life and death because my younger sister lost control of her magic, I remembered that this world was the otome game 「Sparkle like a Jewel」. And I, Langlease Jackberry, am the villainess’ brother.

I want to evade the destiny of destruction that I remembered. I’ll watch over my cute younger sister so that she’ll become an ordinary girl instead of a villainess, and at the very least avert her death if ruin so unluckily falls.

The BAD END routes for the villainess are split into three general types.

As a villainess, my sister brought about the Prince’s displeasure when incidents of her bullying the Heroine came to light.

With his impropriety exposed and his peerage revoked, Father was exiled out of the country.

My sister, who had truly loved the Prince, shocked that the Prince had announced the cancellation of their engagement at the party, committed suicide.

In this route, it is only my sister that dies, and my family and I are not condemned.

The END that could be said to be the centerpiece of the game. My sister, having displeased the Prince, was sentenced to be turned to a jewel with magic. She had been turned into a jewel the same color as her eyes. She was shattered to pieces in front of everyone. With pink jewels dancing in the midst, the still of the smiling Prince and Heroine was beautiful.

However, it was my sister’s life that was smashed.

I will absolutely never permit that kind of future for her.

Presently, perhaps owing to her young age, her personality did not resemble in the slightest that of the template domineering, ill-tempered villainess in the game.

She was kind and with a deep compassion, to the point where she was loved completely by the servants. Naturally I also thought of her as someone precious.

Though I want to avoid the BAD END completely, I’ll work so that I can avoid at the worst the second and third routes where my sister dies and provide a viable lifestyle even after ruin.

To continue living with my sister and my family.

The Noble Girl Who Had Her Engagement Broken Off, Today as Well Pushes the Prince off from the Tower (Shared Universe)Villainess or Heroine? First and Foremost, That is the Question? (Shared Universe)

These are recommendation lists which contains I Became the Villainess’s Brother. You should give them a visit if you're looking for similar novels to read. Alternatively, you can also create your own list.
More Lists >>>

It is really mediocre. It is only 11 chapters but it already shows big problems. Its biggest problem is that it doesn't focus on the main story. In the first few chapters, it establish the main story as given by the description, but suddenly: ... more>>
Spoiler

it drops main story line to tell an unconnected story about this girl and her necklace that he broke.

[collapse]
The tittle says Villainess' Brother but the Villainess part suddenly disappeared from the story-line. It has become a different story entirely. Instead of telling a story, we are given this huge filler! The worst about this is that the new story-line is s*upid and boring. Like, come on. The protagonist is rich and powerful noble. All he needs to do is pay a skillful craftsman, like any sensible person would do. Instead the protagonist wants to do it himself even though he has no idea how to do it. He is s*upid right? The boring part comes from how the author tries to stretch and milk this simple story-line. Like most of the 11 chapters is devoted to this story. It has no apparent bearing on the main story (maybe aside from explaining certain aspect of the setting like its magic system) but still the author makes it go on for so long! The characters themselves aren't that interesting. The protagonist has no clear personality. He acts with no clear or sensible motivation and his thoughts are mostly exposition. The villainess, the other important character of the main story, doesn't receive much attention. For a character who appeared on the story's title she doesn't really appear that much. The other characters are flat generic tropes. The friend, the butler, the maid. That is all you need to know. ****** This story feels like the author has no idea what he's doing. He has this idea but doesn't know what to do to make a story out of it; so, he crams in other generic story-lines to cover his inability. <<less
13 Likes · Like Permalink | Report

MC is a reincarnator with siscon. It's understandable. The lil sis is just that lovable. Hmm... reincarnator... otome game... siscon... a duke's family. This kind of story is so many. I wonder why I'm hooked. Because MC is a kindhearted hard worker fatty? No, but still it's interesting. No twist. It's predictable. And of course, the one shot story is at fault. Well, just read it, and you will start to googling the raw. I recommended to read the series first. If you can't wait to know the overall story, then read the one shot.
12 Likes · Like Permalink | Report

Well yeah its not what I kind of expected. At first I kinda like it but after a few chapters it's starting to get boring for me. To start with it each chapter rarely connects/relates to the next chapter. It is kinda random Like talking about topic "A" then next chapter will be topic "C". Next sometimes PoV for some characters are like fillers as I can't understand the need for their PoV except for Eldor & Fortuna. Then sometimes I forget their age, if I remember correctly (as of ch.46) their age... more>> range is around 11~12 maybe even 13, yet they all act like adults but sometimes like a child. Every time I imagine them they all appear snobbish.. Imagining a bunch of kids fighting over someone, talking of engagements/love seems too early for the story. For me the story so far kinda lost track, Although they are growing at a fast pace but why not just do a 2-3 year time skip. It just feels like around 20-30 chapters are dedicated to develop side characters. It is nice that the author took the time to develop them but what about the MC? So early in the story yet
Spoiler

The MC is still fat, can only use barrier & healing magic, knows a bit of swordsmanship, has a hobby of making accessories, no love interest, a paranoid siscon, no outstanding personality

[collapse]
, and then then Fortuna the so called villainess rarely has screen time yet when she appears its mostly supporting role and wasn't she supposed to be the center of the story or major part of it? Well I may complain a lot but for those who like relaxed SoL this may be for you. There is almost no tension in the story. <<less
6 Likes · Like Permalink | Report

It is a very common story, not so good not so bad but adorable. However if you have strong opinions about body-shaming it could possibly you of. MC and everyone around have very rude comments on the weight issues. Sometimes instead of a child they behave like there is a giant around and over react.
5 Likes · Like Permalink | Report
Advertisements
Leave a Review (Guidelines)
You must be logged in to rate and post a review. Register an account to get started.