Novel Updates
RegisterLogin
Theme
Search
Your changes has been saved.
Advertisements
I Became The Childhood Friend of the Obsessive Second Male Lead 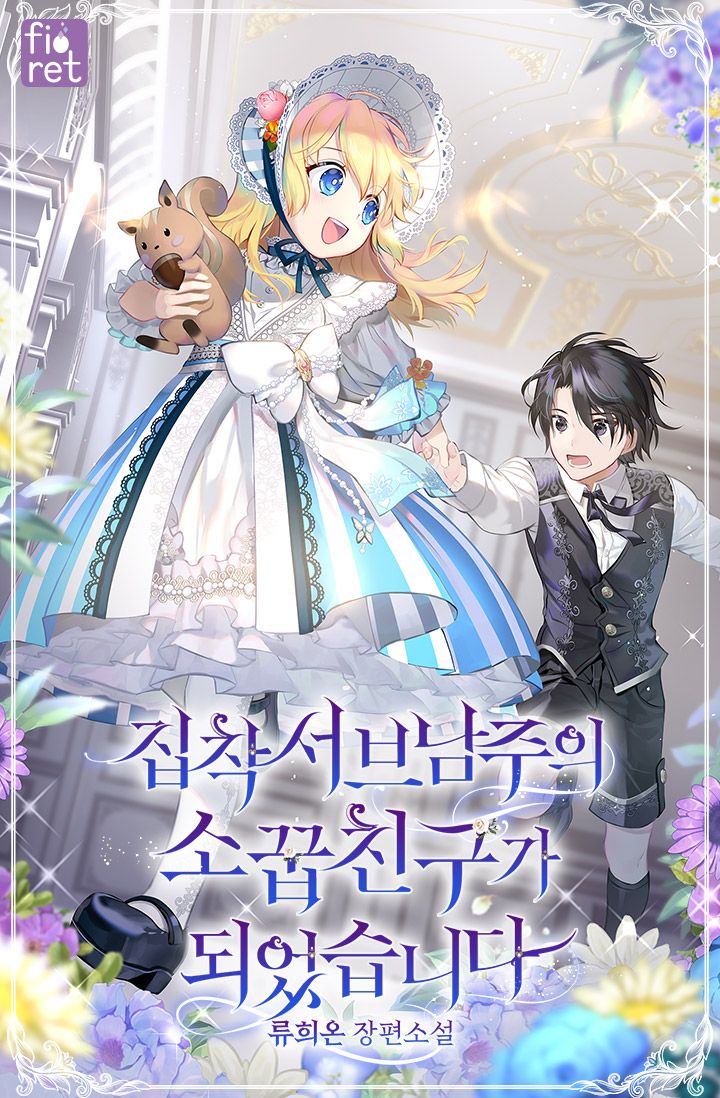 One entry per line
류희온

One entry per line
세릴

Status in Country of Origin. One entry per line
116 chapters (Completed)

One entry per line
Fioret
Kakaopage

The ducal house to which the second male lead belonged to is a military family.

She thought she should repay them for giving her free food and a place to sleep.

She told the second male lead about this and that. All so that he could win the heart of the female lead later.

At this rate, he would become a good man and win her love in the future. (Proud)

Rieta looked around and whispered in Noel’s ear.

“Only be polite and friendly to your most special person.”

Only tell her that she is pretty and that you love her.

Rieta thought he must have understood, right? When she asked, Noel grinned with confidence.

Oh, I’ve taught you everything.

From the age of nine until now before the coming-of-age ceremony…It was very hard to teach her childhood friend who had a terrible bad temper.

But now, Noel wouldn’t be called the unlucky second lead anymore. Maybe he would really push the male lead away and take the female lead to his side.

Rieta grinned as she thought of a different future from the original.

Then Noel swept up her hair down and said,

“…You asked me to say you were pretty right?”

She, when did she?! You’re not supposed to say that to your friend!

Because She Had A Time Limit, She Became The Villain’s Daughter-in-law (1)
Becoming the Villain’s Family (1)
The Baby Raising A Devil (1)
The Reserved Daughter Of a Duke And The Cold-Headed Emperor – The Child I Picked Up In My Past Life Had Become an Emperor (1)
Why Are You So Obsessed With Rejecting Affection? (1)
A Trivial Extra in a Dating Sim (1)

These are recommendation lists which contains I Became The Childhood Friend of the Obsessive Second Male Lead. You should give them a visit if you're looking for similar novels to read. Alternatively, you can also create your own list.
More Lists >>>

I love this novel.
Spoiler

I've been getting tired of reading stuff where the ML is cold to the FL. But the ML here has a personality and does s*upid things with the FL.

[collapse]
It's a very cute and fluffy read.
0 Likes · Like Permalink | Report

Really cute and fluffy novel. I like the ML and the FL, their interactions are so cute and wholesome. I really like the Duke, he's such a refreshing father character in comparison to other "Father figures" in other novels. Even though he gets introduced as the typical cold father, he really knows how to talk to our MC comfortably, and he really knows how to give her words of advice, reassurance and help her as her gaurdian, which is really refeshing to see in these types of novels.
1 Likes · Like Permalink | Report

I dont understand how there can be one star ratings after only one chapter. The translation is good as expected from Sleepy Translations. Theres not much to say after only one chapter. I´m looking forward for more and to balance the incomprehensible one star rating out I will give this a five star.
I will update this Review after more chapters.
17 Likes · Like Permalink | Report

I still at chapter 3, so what can I say except for Rieta cuteness lol. My heart has been purified by her cuteness. She is too cute!! Well looks like she'll be dense about romance but I don't really care haha. I'm looking forward for Rieta and Noel future relationship. They look really cute together I think.
8 Likes · Like Permalink | Report

As everyone has said it is a warm, fluffy story that once can easily read for entertainment. I think this novel's greatest strength is its ability to capture the childish mannerisms and thought process of its main characters. They actually act like kids! It is a very slow novel that covers a lot of small events meticulously (example: the MC trying to memorize her vocabs.), but the author makes it amusing and lovable-- seriously I remember asking myself why I want to spend money to read about two kids run around... more>> a mansion for 2 chapters. A short coming, in my eyes, is its' slow pace. This may have been accentuated because I had been reading every update, but I really want to see them a bit older when they can acknowledge their emotions. I'm a bit impatient hehe <<less
6 Likes · Like Permalink | Report

What I liked more until now is that the ML is slowlyfalling in love/having positive fellings toward MC even though they can't communicate very well.

[collapse]
I adored how the author didn't just jump the language barriers and is slowly teaching the MC the language of the kingdom she went to, instead of making she fluent from the start.
6 Likes · Like Permalink | Report

If you treat this as a story about familial love, or childhood best friends-turn-romance, then it's an alright story. The writing lacks any meaningful detail and seems to give vague impressions of characters' attitudes (aside from the main character, whose inner thoughts are a part of the narrative). Things just kinda... happen? And even the thoughts of the MC are bare bones. Her insights are, in fact, not very insightful and pretty surface-level if anything. The story HAS fluff though. So, if you don't mind the lack of emotional depth... more>> and only want fluff, this story will serve your interests well enough. But about the whole "second male lead" part...
Spoiler

This is one of those stories where I don't see the point in having the MC have knowledge of her past life. It's mentioned early on, and so briefly such that I even forgot it was ever mentioned, that the MC's thoughts and mind regress over time to match her age more closely. So, even though the MC knows that the Duke's son is a second male lead in a novel she read before, she can't actually do anything with that knowledge except be a bit more tolerant and patient with the boy. Like... that's it? Okay, she wants to teach him how to "properly" show affection to his lover, but... she just treats him like a normal friend as a child does . Where's this "teaching" you speak of? Why do we, the readers, need to know that she knows he's a novel character? What's the point of this layer of narrative framing? This knowledge serves little to no purpose to the story. Though I suppose this will come up later down the line, when the "novel's female lead" comes in, but that's not happening any time soon.

You know, at one point, during ~ch30 or so, I got annoyed with the MC because I knew that she was a reincarnator. I forgot that it was stated her mental state/age deteriorated as time went on but, again, it was mentioned just once. Instead of taking on a metanarrative storytelling about fighting fate or whatever, the story just focuses on a neglected child experiencing familial love with a foreign noble family. And that's a fine story premise! Just, what does that have to do with the fact that they're in a novel world that only the MC knows about? She doesn't do anything with this knowledge. It's just... a fact? A statement? That goes absolutely nowhere for this first arc of the story?

[collapse]
I'm reluctant to give it a rating, since they're hard to adjust later and it's still so early on in the story. But I'd give this a 2.5/5 for fluff, and docking it heavily for the "we're actually inside a novel" schtick that goes nowhere. <<less
5 Likes · Like Permalink | Report

Such a cute story, I'm in love! It's so wholesome and pure! And the translations are really well done! Thank you to the tls for this!
5 Likes · Like Permalink | Report

It's sooooo cute. I love it. Translating is also good thank you for translating such a cute story. I can't wait for the next chapter.
2 Likes · Like Permalink | Report

so far it's a slow pace cute story
characters are well presented and beheave their proper age
we can obesrve their slow grow
there are no flat, two dimensional personalities that looks like taken out of chunni delusions (maybe with one exception but his behaviour is frown upon by others and he's thought a madman - as it should be) there are no problem with translations and the story narration is not filled with overhelming descriptions
the chapters are relatively short so one can read them quite fast - that... more>> might be actually a good thing since it's horrid when slow-pace stories are filled with lots of useless description and inner narrations if I were to recommend it or not - I probably would as a light cute fluff that does not make one puke out sugar unnecessarily <<less

The world building and logic to it overall seems a little... flat and full of holes to me so it's hard to get into the story. The author is quite sparse with their words too so it feels like each chapter is short and at the same time, only covers small portions of the events going on, bit by bit. Even when more of the plot is covered, the way it's handled it feels flimsy due to the minuscule amount of words used to address it. I'm not really taken in by... more>> any of the characters either because of the above issue. I can't get any feel of depth from anything, which isn't an issue per se but doesn't help in drawing me in. I did skip around the chapters a bit to see if anything changes later, but it doesn't look to be the case. <<less
1 Likes · Like Permalink | Report

It's super cute. I love the duke and FL (father daughter) moments and how the emperor knows how to have fun with his duke brother. The children are so adorable 😍
1 Likes · Like Permalink | Report

This story is so warm~ To be honest, I don't even care about the ML right now. Rieta and the Duke father daughter type moments are the best! Love them so much. Also, that king is just utter garbage. Thank goodness Rieta isn't staying there anymore.
1 Likes · Like Permalink | Report

This is absolutely, obviously, so, cute! I rarely found reincarnated FL that retains her current world's mentality (she's a child) except Taming a Munchkin probably, and depict the interaction between the child FL and ML so... normal. The 'doting adopted duke father' also quite normal, too, like, he doesn't just think 'cute!' then doting her like all daddy duke doting baby FL out there. So refreshing and warming.
0 Likes · Like Permalink | Report

This novel is so flufy and the protagonist is so cute!!! It's one of the novels I prefer.
0 Likes · Like Permalink | Report
Advertisements
Leave a Review (Guidelines)
You must be logged in to rate and post a review. Register an account to get started.