Novel Updates
RegisterLogin
Theme
Search
Your changes has been saved.
Advertisements
I Became Popular in the Underworld After Live Broadcasting Taoism 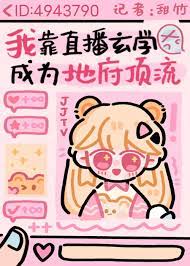 Status in Country of Origin. One entry per line
161 Chapters (Completed)

“Spiritual Affairs” is a highly popular psychic network, but it is a pity that the whole network is full of ridicule.

The contestants are frequently scolded for their behavior and practices.

But no one knows that this program is a huge hit in the underworld.

Every time the show starts, billions of ghosts are standing in front of the screen watching the program and commenting on it——-

“This guy is bloody, his soul is hooked by a ghost. What’s wrong with my horse’s face?”

“It’s good to touch bones. Can’t you touch the soul without touching the bones?”

The new season of the program officially announced the new guest.

Gu Zhisang is ridiculed by netizens and become trending in hot searches.

Gu Zhisang the Headmaster of Taoism, opened her eyes and became the vase cannon fodder in the exciting novel about the entertainment circle.

When she transmigrated, she was being hacked by the whole network and facing the dilemma of being robbed of resources and receiving bad traffic.

One entry per line
我靠玄学直播成为地府顶流

These are recommendation lists which contains I Became Popular in the Underworld After Live Broadcasting Taoism. You should give them a visit if you're looking for similar novels to read. Alternatively, you can also create your own list.
More Lists >>>

Great novel! The MC is hella cool. She's OP but that doesn't make the novel boring at all. In short, this novel is basically people asking MC for help during a livestreaming competition/show. The 'help-seekers' reach out to the show and the competitors in the show have to find out what is ailing them and thus try to find the solution to their 'haunting' problems. The other competitors find little clues here and there and the MC comes dead last and finally reveal the whole story and helps them. Every story... more>> arc is interesting to read. It's a case of whodunnit usually. They delve into very relevant topics as well. The novel ends with the MC saving the world. The villain is an interesting creature and concept. The romance is barely there but we can see the ML is a really cute character. I'm used to seeing morally grey MLs so this ML was a breath of fresh air. There is very little interaction between them though. Wish there was some fanwai. There were some plotholes here and there but they are negligible. Overall I recommend reading this novel. 5/5 <<less
1 Likes · Like Permalink | Report

I liked so much. The supernatural cases were very interesting and very detailed so you could imagine, some very dark even involving cannibalism. But each case lasted many chapters so it was normal for 1 day to take more than 30 chapters. It has a romance genre but the ML only appeared in chapter 85 and then reappeared only 5 times. The focus on the supernatural show pissed me off a bit after 100 chapters as they only focused on that but it was a clever way to propagate the... more>> subject as well as solve far-flung cases. But if they gave a break between each episode recording to happen something else, it would be more interesting. MC is perfect. Zero defects. I enjoyed her interactions with people. Due to her path of Taoism, she was very cold towards evil people, not caring about the ghosts' revenge towards them and feigning ignorance for their death. Her fame in the underworld was also pleasing. The ghosts' love for her was very funny and when they wanted to enter the dreams of the black fans who insulted her to scare them, they made me laugh a lot (although she asked them not to do that in the end, you can see their affection for her). ML, despite appearing little, won me over easily so I didn't like his family very much (especially the younger brother who was OML) The ending was a little abrupt I believe because the author spent a lot of chapter with the program but it wasn't without meaning. But I wish it had more extras and told more about the lives of the protagonists after they reunited (BECAUSE IT TOOK TIME). <<less
3 Likes · Like Permalink | Report
Advertisements
Leave a Review (Guidelines)
You must be logged in to rate and post a review. Register an account to get started.

EON: THE ASCENSION OF THE SNOW...