Novel Updates
RegisterLogin
Theme
Search
Your changes has been saved.
Advertisements
I Became a Guide For My Childhood Friend

Home >
Novel >
I Became a Guide For My Childhood Friend 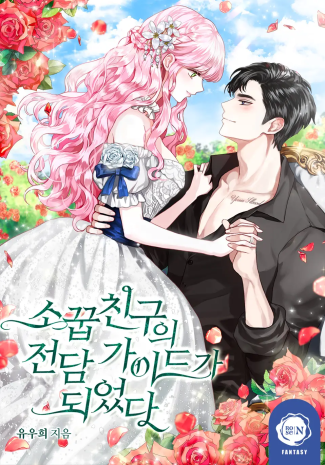 “I told you. You have to take responsibility for me. We have to get married.”

An unexpected difficulty appears in front of Yernia, who tried to find love in her hopes to avoid a forced marriage, but then, she became a dedicated guide to her childhood friend.
The current events aren’t happening the way they should be, and they have become so twisted compared to the original novel.

She was just a supporting character who tormented the Female Lead and then died from the Male Lead’s hands.
Yet, it is undeniable that Yernia is his guide from the pieces of evidence he had gathered so far!

Yena tried to stop herself from marrying her childhood friend, but it turned out she had no choice.

However, unlike Yernia, who thought about divorcing him after being his guide for a little bit until the female protagonist arrives, Cassian seems to be serious about this marriage for some reason.
Even…

“I just can’t calm down today.”

Well, is this what guides must do?

It felt strange, but the most bizarre thing to Yena was herself.

Why is her heart shaking so much?

The childhood friend, who she used to only see as a younger brother, begins to appear as a man.

Refusing Your Ex-Husband’s Obsession: A Guide (1)

These are recommendation lists which contains I Became a Guide For My Childhood Friend. You should give them a visit if you're looking for similar novels to read. Alternatively, you can also create your own list.
More Lists >>>

I really don't like the main lead's chemistry. Feels really forced. FL is the naive and cute type. But in reality, she's just impulsive and dumb. ML is the hot but secretly a bully type. He's been teasing and making fun of FL since forever and FL has never once won over him. But even after all that, she sees ML as family and doesn't dislike him because she doesn't have any friends besides ML. They said it's cause she made friends but they drifted away from her for no... more>> particular reason. I have a reasonable suspicion that ML played some part behind that but I'm not sure yet. And now they're getting married without FL's consent cause of some law! I was hoping that FL will disagree to the marriage and hold her stance before slowly agreeing to it. But from what I see, she's just a paper tiger. She'll scream "I won't get married!", then turn around and blush cause ML is handsome in the next second while muttering "What's wrong with me?"... Ugh! I HATE HATE HATE this type of FL! So indecisive and annoying! Plus the monologue never ends! Also, if she's been just friends with ML for so long, she should've already built some immunity against ML's beauty. It really feels like those old melodramatic shoujo manga but in different setting. I would've rated this 1 star but maybe other people will like this type of main leads so I won't rate. But really, they make me so fučking annoyed!! Arghhh!!! <<less
21 Likes · Like Permalink | Report

The other reviewers have already done a wonderful job of summarizing the plot, but I just want to add my two cents and say that this novel is obviously jockeying for a manhwa adaptation. From the way how the narrative is structured, you can tell that the writer is depending heavily on how “cute” the characters interactions will look. 🙄 But imo, this sort of contentious, will they, won’t they trope is so overdone. It’s lame 😒 af.
1 Likes · Like Permalink | Report
Leave a Review (Guidelines)
You must be logged in to rate and post a review. Register an account to get started.