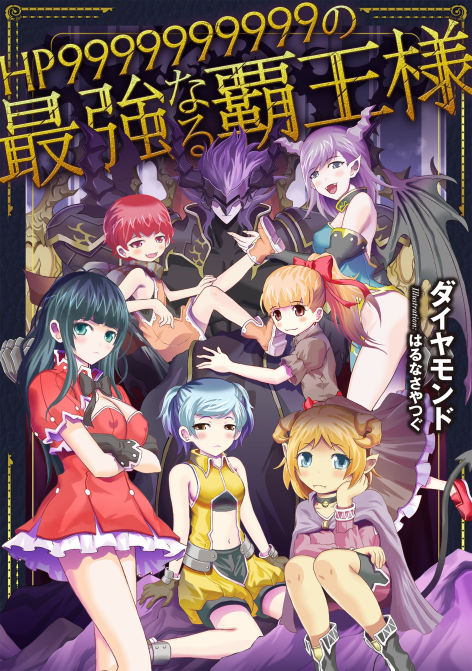 One entry per line
Diamond
ダイヤモンド

But is that even possible…?

I Got Reincarnated And Mistaken As A Genius? (1)
Because There Were 100 Goddesses in Charge of Reincarnation, I Received 100 Cheat Skills (1)
HP1 kara Hajimeru Isekai Musou (1)
The Simple Job of Only Perishing to the Hero (1)
The Returner (1)

These are recommendation lists which contains HP9999999999. You should give them a visit if you're looking for similar novels to read. Alternatively, you can also create your own list.
More Lists >>>

OP stats, useless personality. The usual. Main character has three beauties who say they've lived for the moment they could give him their virginity. He thinks "There's no way I can do anything to them!" Okay, so you look at the start and think "This could be fun. He wants to be a hero, but instead became the last boss." But there's nothing boss-like about this character at all. If he had any self-assertion whatsoever he could just go off and be a superhero and protect people. If he had a... more>> sense of responsibility he could work towards reconciling humans and demons. If he had any desires whatsoever, he could have them fulfilled. But he has nothing but his sense of shame and lots of power. This is a warning for people like me who can't stand hetare (useless personality) protagonists. No, it was fine up to the end of chapter 4, and if there aren't a lot of similar situations I guess it would be fine overall, but *glances at the cover art* yeah, there'll be a ton of similar situations. Dropped without regret. <<less
55 Likes · Like Permalink | Report

Watching this MC attempt to solve his problems is like watching a starving person jump through flaming hoops to grab a piece of stale bread when there's a fully stocked fridge to his left. The MC pretty much has unlimited power and immortality, but for some reason, he needs an excuse to sneak out of his own castle just to take a walk because he answers to his annoying secretary for some reason. You live in an enormous playground and still manage to squeeze yourself into a corner and then... more>> complain about being bored. Don't read this if little, illogical scenarios like this annoy you. The story tries to derive humor by having the MC be a straightman, but he just ends up being more inept and useless than everyone around him <<less
28 Likes · Like Permalink | Report

Looks at plot summary - Seems cool. Has maxed stats, is a demon king, and instead of using his power for evil he wants to be a hero. Fair enough. You have max stats and are the Demon King so you can do whatever you put your mind to. Looks at cover art - Noice. Looks like he's enjoying the perks of being an over powered ruler. Starts reading the actual story - I believe I just puked in my mouth. What is this garbage? Apparently you can give some men all... more>> the power in the world and they will still find a way to be a useless beta. Women want his man junk? "NO THANKS LADIES! Iv'e only got a few more years left and i'll be a sage!". Seriously what woman would even want him let alone fight over him? He lets everyone walk on him and he's a prisoner to his own castle and shortcomings. Had potential. Sad. <<less
13 Likes · Like Permalink | Report

Just to start off, this novel is about misdirection. It is about someone trying to be nice, failing and becoming an even more terrifying demon king. It takes a certain kind of mindset to enjoy it. It is not focused on world-building quite yet, so it comes off jarring but there is potential for something more here.
9 Likes · Like Permalink | Report

For a story that was named HP9999999999 it sure is odd that the MC has every stat maxed and every ability set to World Destruction mode. If the author wanted to go that route why not call the story something like "Ultimate Demon King" or "Maxed Beginning Character" or Stats999999999? I was more interested in a character that the only thing op about him was his high health or a character that lost the ability to regenerate his health and starts the world with billions of health points, but alas... more>> neither of those appeared. One of the key things I have to stress about these stories that seemingly begin without any plot what-so-ever... you need a plot. Even if its just a slice of life or a storyline about a character doing everything thing in his power to avoid doing work or trying to sleep for 24 hours a day... you need something. Unfortunately what we have here is a leader type character who acts like a whipped dog and follows anyone. Oh, and what happened to the MC? Why did he forget the thing that he said like 2 minutes ago?
Spoiler

"I won't kill a single thing." two paragraphs later he wipes out an entire human army. He could have sent his own armies, lord knows they wanted to go fight, but instead he just uses one of his world destroying moves and kills everything. What happened to not killing stuff?

Unlike most of the other reviews I've actually given this more of a chance. What I've found out is... the MC is pretty useless, though that's the point, what'd you really expect with the genre tags 'Comedy, Ecchi, Harem', when has a novel with these tags ever been the best of the best, where the MC isn't completely useless and/or dense as hell. Overall, It's a decent, quick read, would recommend to someone looking for a quick read of a Harem novel.
7 Likes · Like Permalink | Report

Only two chapters out but it's enjoyable so far; his underlings are comically loyal (especially Anri) and I'm interested in seeing how he'll handle his OP power. Also, the translation is top notch! I look forward to what the rest of the plot holds. Fingers crossed that this stays amusing and interesting :)
6 Likes · Like Permalink | Report

I'm starting to get disappointed really, they create OP ass characters with the whole "Evil as hell and should be cold blooded" outlook etc, but then they always turn out to be such pathetic beta males. You're a being who could destroy the entire planet single handedly. All these false morals about "killing is wrong" etc and the way people show it in novels. I just hate the utter waste of such a good character plate. OP Demon King, with the power to destroy the world. Why ruin them by... more>> making them pacifistic morons with zero sense? Can there never be an OP dude, who's cold blooded, merciless and not a dense idiotic moron? <<less
5 Likes · Like Permalink | Report

Being only one chapter in I can see some potential for people who enjoy over Overpower characters (yes I said over trice to emphasis how much over power the MC seems compared to overpower characters. At least as of right now he has a goal compared to many overpower characters who kinda just wander around with nothing in mind. It still 1 chapter though so who knows but if I say one thing I hope it focuses more on the comedy than action (at least for the MC himself) so... more>> similar to One Punch man in some respect. Time will tell <<less
4 Likes · Like Permalink | Report

What a disappointment. Having read the description I was expecting a story about this evil looking character intent on going around playing the hero, a story about subverting expectations and playing with tropes in creative ways. Ya know, an action comedy with a bit of ecchi. What I got is a protagonist that spends most of his time sitting around doing nothing while the plot does its best impression of a shambling zombie. In the span of 33 chapters he's left his castle twice and visited 3 locations... some how managing to... more>> be anticlimactic in every case. The author seems to spend more time hammering home that protag-kun is an utterly broken build than they do making the character do interesting things. The other characters in the story don't come across much better as pretty much every single one is a caricature that makes you wonder how they managed to survive daily life until now. Of course I haven't touched on the personality of the protagonist, partly because he doesn't have much of one and partly because he's as useless as every other character. If I had to name a redeeming feature for him it would be that he's so pathetic that he's unlikely to ever be a threat to world peace. How anyone could reasonably empathise with such an apathetic and shallow creature is beyond me. If you want something with a similar premise but better execution, consider the Korean WN called "The Returner" about a Demon King that just wants a peaceful life. <<less
3 Likes · Like Permalink | Report

Honestly its not as bad as everyone makes it out to be. Its funny but he really needs to take control of his life instead of letting everyone do everything for him. Apparently this is supposed to be a harem story??? Yeah thats just not the case. Honestly someone needs to delete this annoying female character cuz she only making life more difficult. If it were me I would have just let her kill herself. The MC pretty much the beta more s*upid version of overlord. He does the exact same... more>> things but fails. Its slightly entertaining but thats pretty much it. I wish he interacted with humans more because that when the story is at its best. <<less
2 Likes · Like Permalink | Report

It's a story about the supreme Demon Lord who wield almighty power to... do nothing. Maybe repelling those pests called human? Or healing his loyal attendant who keep fainting when being praised too much? Uuh... seriously, if you're too overpowered, nothing seems interesting anymore. But whatever, it's a gag novel so it doesn't matters, right~? **laughs**
2 Likes · Like Permalink | Report

After reading the plot, I thought that this novel could be something intresting, but after reading just 5 chapters I knew that I again shot myself in my foot. This is again one more sh*t of japaneese authors (dont take this as racism towards japan, take it against their author.). I immedieately dropped it and am writing this review. I doubt that anybody not living in japan could read it, while being intrested in it. I can only say one word to the author "may god help you in... more>> your sh*t life". <<less
1 Likes · Like Permalink | Report
Advertisements
Leave a Review (Guidelines)
You must be logged in to rate and post a review. Register an account to get started.

He Who Fights With Monsters
Advertisements