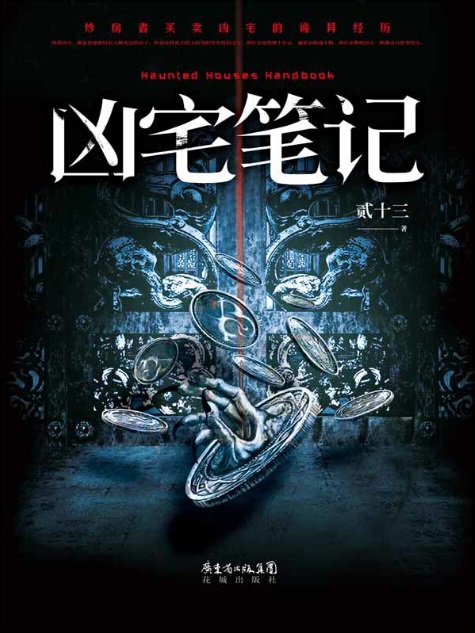 One entry per line
Motie
花城出版社

A “xiongzhai”, or “haunted house” in English context, is a house where someone dies an unexpected death. Legend has it that if a person dies in such a manner, they would be resentful because their destined lifespan has not yet finished. Their ghosts will then linger around, causing ‘unnatural’ things to occur in the place.

Jiang Shuo and Qin Yiheng are a peculiar duo of real estate investors who purchase well-known haunted houses at low prices. After exorcising the ghosts and evil spirits, they sell the houses again, each time earning great profits. Their ‘business’ is doing exceptionally well!

However, the lucky duo never expect that they are being followed by some strange people. Surrounding them, a big conspiracy is quietly being harboured. The mysterious real estate collaborator Six Fingers and the ‘non-human’ partner Yuan Zhen comes one after another; many extremely dangerous haunted houses keep appearing. Things become increasingly difficult to handle, sometimes even bring them to the verge of death. At this point, they realise they are trapped in a deadly net!

In the end, what conspiracy is hidden there? Is it true that those haunted houses’ ghosts and feng shui¹ want them dead? Who is the Mysterious Figure behind all this?

¹ 风水 [Feng Shui], also known as Chinese geomancy, is a practice originating from ancient China which claims to use energy forces to harmonise individuals with their surrounding environment. Believed to be a pseudo-science and still widely used in many East Asian countries today, feng shui’s most common application is to orient homes and buildings in an auspicious manner.

These are recommendation lists which contains Haunted Houses’ Chronicles. You should give them a visit if you're looking for similar novels to read. Alternatively, you can also create your own list.
More Lists >>>

Hi all, to be transparent, this is translator here ^^ I've been waiting for someone to leave their thoughts before I say what I need to say. And finally! Truth be told, I agree to almost everything reviewer fuwa (.) fuwa said, because it's indeed fair judgement at least until chapter 8 of the novel. The novel does seem rather slow and wordy at first. The narrative is heavily based on descriptive passages, cultural references and obscure theories surrounding 'spiritual matters'. On top of that, it requires a bit of self-deduction on the... more>> reader's part to fully absorb the story. So yes, I can totally understand it can't be everyone's cup of tea. But will the storytelling remain slow and wordy forever? Actually, no, not when the overarching plot actually kicks in. Unlike many horror stories out there where the ghosts' appearance and their backstories/why they haunt what they haunt are described in details, Haunted Houses' Chronicles focuses more on the spiritual theories as to why the ghosts come about. More often than not, it is because someone, something manipulates the feng shui formation of the place, hence messing up the energy harmony and manifesting the presence of 'unclean things'. Does that sound confusing? Trust me, I was confused too. But the more I dig in, the more mind-blowing this whole mysterious art of feng shui turns out to be. I do my research and kill quite a lot of brain cells as I move along with the translation. Let's just say, I'm intrigued, and I hope you will be too as you dive further in this novel. But that isn't the only reason why I choose to translate this. Why do all these stories seem fragmented and the characters seem flat, and more so, why does Qin Yiheng (the 2nd protagonist) just keep being annoyingly silent and apparently unprofessional? Why did he just suddenly turn up out of nowhere then tag along with Jiang Shuo everywhere? There is in fact a grand scheme of things, which will arrive nearer to the latter half of volume 1. All the dots will connect at one point. It will get better. You have my promise. <<less
5 Likes · Like Permalink | Report

Oh this, it used to be highly rated on the Chinese internet. Think many people get into it because it's recommended by Nan Pai San Shu, the author of Daomu Biji (China's most famous tomb robbing novel). The individual stories are not too scary. There's a main plot with some sharp twists. The writing may feel a bit weak at first as the writer was still a novice, but the atmosphere is great and the subject matter is pretty interesting, especially if you have personal experience with Feng Shui in... more>> real life. I became so much more knowledgable about Feng Shui after reading this. The two male leads are also quite a popular CP in China lol. You can think of this as the Chinese Feng Shui version of Sherlock. <<less
0 Likes · Like Permalink | Report

The summary is interesting, but as soon as I read first chapter I know this sucks. Let me tell you why this sucks (I said sucks twice, oh... or thrice:)
Spoiler

Hence, today I am telling you a bit on my experience with haunted houses in recent years... etc.

Qin Yiheng said that the resentful spirits had now disappeared. He used a method of suffocation, which was to trap the spirits in the house, leaving them nowhere to hide. This would suffocate the spirits, thus forcing them to dissipate. He explained that this was a very vicious method, but there was really no other way. If we used any other methods, it would prove too difficult to destroy these spirits.

Thereafter, Qin Yiheng consulted someone with expertise in this area. The two of them finally concluded that the two cats seemed to have become demons and possessed the elderly couple. No one knew what happened to the cats later on, but it looked like one of them went back to the house at the same time when the student died. Thus, it stayed unknown whether it was the cat's or the student's spirit that wanted to take over my body. |||| He said simply, "Dogs have Yin Yang Eyes, and at night a dog is equivalent to an extra helper."

[collapse]
Of course, if you're interested in learning some superstition, urban legend, or any traditional method of exorcise in China, this is not bad at bringing out those kind of stuff.
0 Likes · Like Permalink | Report
Advertisements
Leave a Review (Guidelines)
You must be logged in to rate and post a review. Register an account to get started.