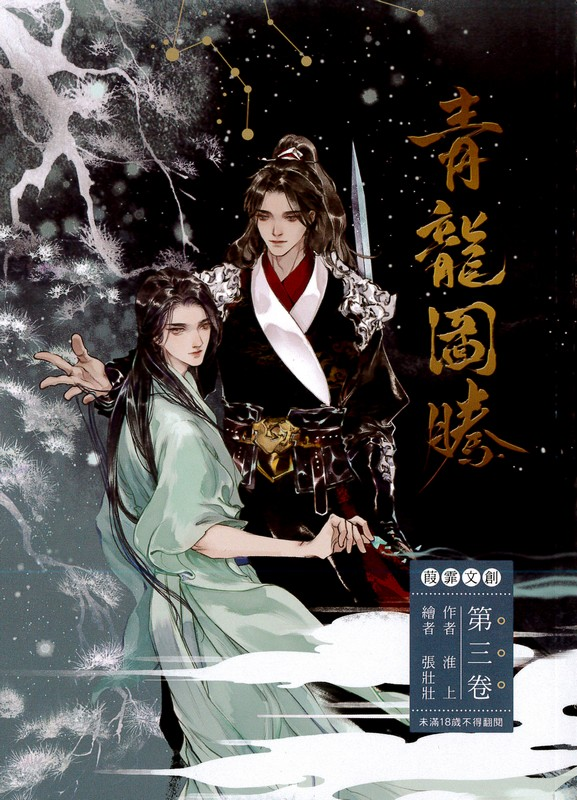 Status in Country of Origin. One entry per line
110 chapters + 2 extras (Complete)

If only the Winged General of Han were around to fight the township of Longcheng, the barbarians and their horses would never have dared to cross the Yin Mountains.

These are recommendation lists which contains Green Dragon Totem. You should give them a visit if you're looking for similar novels to read. Alternatively, you can also create your own list.
More Lists >>>

Write a Review
10 Reviews sorted by

I kind of get the gist of Huai Shan's style now - complicated plot that may not always make sense, and a main couple who are full of tragedy and tenderness. Her strength definitely lies in writing the emotions of the main pair. However this is one of her weaker works. This book is really a bit of a mess... The plot is a total mess and the main pairing has too much noncon and there are barely any moments of tenderness. Lots of misunderstandings and angst. A bit too... more>> melodramatic and 'angst for the sake of angst' for my tastes. Overall I'm really not feeling this book. <<less
1 Likes · Like Permalink | Report

What is it with me and fictional shizun x disciple relationships? （ ；￣ェ￣） Anyway, this novel takes some time to pick up steam, but once it does, I guarantee you'll be in for a ride! This is a brief summary of things without revealing too much, as the blurb/premise isn't very concise, and it admittedly put me off from starting this novel. This is a reorganized summary, and is more focused on the chronological aspects than plot-wise. From my understanding, there's a boy (who may or may not be of royal descent) who... more>> is abandoned in the desert. He is lugged around by a bunch of s*ave traders/traffickers (though we don't really see much on this except in one flashback) when he meets a handsome, albeit rather mysterious masked man. The man then proceeds to "purchase" him and takes him to a sand brick house in the middle of the desert. During a span of time, the boy gradually realizes that he is in no immediate harm and relaxes. The man is often out, hunting or trading the spoils of his efforts, and he always wears a mask and has his sword on hand. One day, the boy sees the man's sword partially unsheathed, and goes up to touch. This leads to a near death encounter, after which the boy sets his mind to leave. However, he was less prepared than he thought, and ends up dehydrated and miserable, until the man finds him again and takes him on as a disciple. Then they do the whole mutual survival thing, but don't expect to see much of this either so far. Then present day, the boy, now a man, has been living in a temple after arriving there, unconscious and bleeding, and is toughing it out as a monk. He knew he was rescued but has no recollection of his past, except a body of scars, and a strange recurring nightmare of a man in a desert, whom he called "master", trying to kill him. Then one night, in a truly fortuitous encounter, he meets the supreme general commander of the land (or something along those lines. This honestly felt like Sha Po Lang all over again. You can't convince me otherwise) and he feels like this general seems familiar, almost like a person he used to know... Overall, I like the descriptions of the classical times and nods to real historical tidbits in this novel. It's reading like a slow burn and I look forward to the development from both parties. The dialogue between what I think, and have all but confirmed, are the leads is very amusing. However, some cons for me are that I'm kind of confused as to how the whole magicking thing in here works and things on the general plot (the first volume is kind of messy). And unfortunately, some, if not most, of the royal family's actions and how they connect to history is lost on me. But ultimately, I think it's worth the try and was definitely worth the read. <<less
17 Likes · Like Permalink | Report

Logic is not this novels strong point, just saying first. The strongest point is the rich descriptions and poetry, as well as a general idea of the early Tang dynasty.
15 Likes · Like Permalink | Report

An underrated novel and an instant favorite of mine. For people with no prior Chinese history knowledge like me, the description is rather confusing, so maybe this helps a little bit: Two years after waking up in a bloodied and (half) amnestic state at a monastery's doorstep, the MC encounters the one who tried to kill him. He slowly and unwittingly gets involved into court politics while trying to make sense of his own background in the Tang dynasty. The MC is a righteous and honest person who struggles between holding himself... more>> back and taking action when injustice is done, while the ML is morally ambiguous and scheming and knows how to subtly manipulate a situation to his own advantage. Their dynamic is unbalanced, which is rather common among BL novels, but it works in their case (probably because of the slow-burn romance, which is done excellently). I still expect a nice and fitting character growth from both over the course of the story. Theme-wise it's a blend of historical fiction, wuxia, and fantasy. The 'fantasy' aspects are sometimes too cliché (as in anime-ish), and there's indeed some logic issues in the first couple of chapters, but the historical setting is very rich and beautiful. The author also doesn't drown you with never-ending descriptions of court politics. If you still like to know more about the era, the translators provide useful info at the end of each chapter. Their translation quality is great, by the way. This story requires their reader's full investment to appreciate its subtle beauty, and up to now, each chapter has been worth it. I just really hope the rest of it is as good as the first 20+, and I expect a good bit of character development from the MC. <<less
9 Likes · Like Permalink | Report

This is one of the best bl novels I have ever read, the main focus isnt on romance (till 25 there aint any) but on the storyline and thats makes it better in this category. I won't say much about the story you all should read it for yourself. There is great deal on information about china past eras and translator did an incredible job throughout all the novel. I hope this novel gets super famous because it got all the best points and translation is super good.
4 Likes · Like Permalink | Report

It's not quickpaced, instead painstakingly slow at the start. So, please keep that in mind while reading this. It definitely gets better in the most of confusing topics and too many confusing events at the beginning. I, so far, like the story as it's at an interesting point right now, but I had been contemplating whether to stop reading this novel at the start where I was really confused on what was happening. Thankfully I didn't! ?
4 Likes · Like Permalink | Report

I've just read too little yet I'm greedy for more. The novel is written in poetly and mysterious but I love it. It a gem indeed great novel and great tranlstion which gets you hooked from the start. Xie is a viscious shou OMG. Come read this novel, I like reading ancient Chinese novels though I hated history lessons
3 Likes · Like Permalink | Report

(I completely agree that logic is not this novel's strong point, but even so, it was a rather moving story that was hard to put down (to me, at least)) (The ending felt kind of... strange (ending spoilers below)) ... more>>
Spoiler

The ending hit me like a train crash, and not in a good way. The story pretty much ends abruptly right after the climax, with everything that happens afterwards glossed over with a couple paragraphs.

And the way the whole internal conflict was resolved was handled very very strangely, in that they somehow didn't end up tossing Wu Zetian off the throne, and somehow the "勤王" army, which got together for the whole point of tossing Wu Zetian off the throne was totally okay with breaking into Chang'an, yet not tossing her off the throne, and letting her be empress for the 10 years or so that she was empress for in actual history. Oh and, like in actual history, somehow she still ended up messing around with those two gigolos... wow sure needed to know that.

But yeah, the aftermath of the civil war/uprising that Shan Chao started and the stuff that happens in Wu Zetian's reign is not expounded upon at all. And when Shan Chao (now Li Chao) finally becomes emperor, it's like 10+ years later, summed up in a paragraph, and everything's done. (And Xie Yun has got to be like almost 50 now right? What happened to your determination to not make him wait any longer? To seize the throne so that you could give him the power or whatever that he wanted so desperately?)

Finally finished this novel by raw !🎐🌱❤️ this novel is good, at first you will think all of this is some complicated conspiracy set up by XY (?), then it's turned out not so. There will be so many why (s) ? In the begining and so. ... more>>
Spoiler

XY is not some vicious cold blood villain actually, also not some holy good person, this make me like his character because he's not a naive lame shou ❤️

SC is very affectionate towards XY obviously, but he's not some dog gong because XY also respect and actually accept SC (there's nothing like the feeling of being offend by SC). So I love SC character too ❤️

[collapse]
but the novel never tell their exact age, so I just can roughly guess and go on with the plot, btw I love Yin Kaiyang and JinLing characters 🌱 (although they play some big lose to XY, in the end none of YK, JL or XY finished each other life) about the empress I have nothing to say as to why after done so many sins but no one killed her mercilessly 👀 <<less
1 Likes · Like Permalink | Report

well gotta agree logic is not the strong point of this novel. but the language and........ feelings. omg the nostalgia feeling here is so abundant I can't even. I don't know how to describe the feelings, take it as 'sometimes living peacefully in desert is better than living luxuriously in palace'. i swear the shou is just plain difficult, nasty and cunning af, and hides his feelings too well. gong is good boy, dragged into conspiracies. rip this gong. maan after finishing this, I just wanna sit at the corner of room and... more>> lamenting, refusing the extra #2 and only accepting extra #1
Spoiler

my blank brain just realized Empress Wu in the novel is that Empress Wu aka Wu Zeitan. holymoly.

[collapse]
now, I don't know if I can survive listening the audio drama. <<less
0 Likes · Like Permalink | Report
Leave a Review (Guidelines)
You must be logged in to rate and post a review. Register an account to get started.