Novel Updates
RegisterLogin
Theme
Search
Your changes has been saved.
Advertisements
Gin no Juujika to Draculea 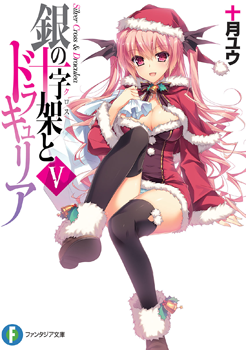 One entry per line
Totsuki Yuu

One entry per line
Yasaka Minato

“Impossible… Why are you not following my orders!? Clearly I sucked your blood, why!?”

On the very first day of high school, the youth subscribing to the philosophy of “absolutely ordinary everyday life,” Kujou Hisui, encountered disaster head on: He was attacked by Rushella Daamu Draculea, the vampire who had lost her memory. Rushella was greatly intrigued to find her vampire powers ineffective against Hisui. Not only did she make Hisui’s home her own, she even enrolled in his school to stick to him–

Hisui had no choice but to help Rushella regain her memory. But before one crisis could be resolved, many more had risen. With tempting advances from the mysterious Sudou Mei, and kidnapped by the girl from the Supernatural Investigations Section in search of Rushella, Hisui’s ordinary life has been replaced by its complete opposite, drama–

Romantic comedy and supernatural action in a school setting!

These are recommendation lists which contains Gin no Juujika to Draculea. You should give them a visit if you're looking for similar novels to read. Alternatively, you can also create your own list.
More Lists >>>

Honestly this was pretty sub par overall. The MC has a decent personality and the cast is well generic but well varried. The main issues with the story come with it's plot. While avoiding spoilers for now all I can say is the story doesn't have great pacing and will go from slow to events just being resolved. This is more of a problem later than earlier but it gets really bad during the last arc which has an extremely dissapointing ending ... more>>
Spoiler

Okay so throughout the entire story there are mysteries like "just what kind of person was the MC's adoptive parent" or "where does his anti-drac mode come from" or most importantly "Just who is Rushella and what are her lost memories".

Well all of these questions get answered pretty much at the same time. Vamp-mom didn't die she just gave him her heart to keep her alive and fell apart for a while, oh and it was her causing trouble for no apparent reason the last arc or two. Somehow this gave him anti drac mode although it's not really explained why. We never learn much about vamp mom besides this as she spends most of the time pretending to be evil or good at various points with her true wish not being clear until she just dies suddenly. As for Rushella turns out she's just an artificial true ancenstor made by someone else who is already dead. So she more or less has no real memories or past that matters to the readers.

So yeah vamp mom dies but not before saying that the MC's special blood slowly turns vampires into humans, again for some reason, so Rushella is supposed to just keep drinking his blood until she turns human and live a human life with him. Which she's okay with now since her whole vampire pride she's had the entire time went away a little while before this.

[collapse]
The main problems with that ending is that it finally introduces a character the readers have been waiting to meet and even makes then interesting only to use them as a plot device and get rid of them despite the MC's big speech about saving them. Rather than Tragic it comes off more as anti-climactic. Also Rushella's mystery is revealed to be as obvious and bland as possible and the revelation has absolutely no consequences to it. <<less
2 Likes · Like Permalink | Report

It was okay, I didn't like the genre as it seemed it was geared towards FL readers, the rating itself was just because of the quality though
1 Likes · Like Permalink | Report

A good read, mostly fan service, some fight scenes and a.. Rushed ending.. Meh It is complete though so you won't lose anything if you give it a whirl, while its not worth 5 stars, its still better then 3 stars. It's your supernatural mixing pot in this novel and you can't help but start to love the characters and there interaction with our MC. Overall I recommend this but just don't get your hopes up for "that" ending you want out of these novels.
1 Likes · Like Permalink | Report

Seriously, why is there so less comments about this novel? Not only it is complete, but also great. Miraluka caring for Hisui was amazing but also weird, as a mother, big sister and lover, she was definitely the greatest caracter in this novel. On the other hand, Rushella was your typical tsundere caracter that you find everywhere, too plain and egocentrique. She could have at less understand that Miraluka will always have a special place in Hisui heart as a family and lover, after all it is thanks to her that he... more>> is still alive, and event raise him. She just wanted him to forget every women he have knew and only have her in his heart, that impossible considering what he have already live before meeting her. If she wanted to have a special place for her in his heart why not acept his past and build her own history with him, rather than wanting take over the place of Miraluka in him, at the end she will only be a substitute of her. Finaly it is Miraluka who cemented Hisui and Rushella relation, what a great woman despite having the strength to take her heart all that time. Well the other caracters are your typical generic caracters. Sorry for my english I am not good at it. <<less
0 Likes · Like Permalink | Report

If you're a fan of supernaturals or about the mythical vampires, werewolves, Dr. Frankenstein's monster and the likes, with a twist of mystery, rom-com, drama and some cliche-cream of the crop lewdness, and a main character who have a quick wits and don't hesitate to give his answers then you might like this novel as do I. Hisui, your main protagonist, is already acquainted with this type of legends as for the premise. The plot is written in a way that his supposedly new normal life should move on but before... more>> it could have, he met again his fate to encounter such monsters and face to accept this kind of environment around him and to accept his past or move on in the process. What fills most of the contents are settings, fan services, a tragic past, and the casts' quirks. All volumes got some good build up of mystery somewhat as well, it didn't branch that much so all question will see the light through all those books. And best of all, what I really like about this series is that, when a character is put to the test, he/she don't have a weak resolve and by characters, I mean to include the antagonists as well. Sadly, the fights aren't that exciting, what worst is, the lore of monsters here and compare it to lore in other common literature, it doesn't have a big difference. I.e. : Vampires and progenitors' dining habits, their powers to turn themselves into a flock of bats, dispersing into a mist, their weaknesses of cross and sunlight, etc. It's a really minus for me if it wasn't for Hisui's special constitution. Overall enjoyment: 3.5/5 <<less
0 Likes · Like Permalink | Report

Mostly fan service, but I must say it's a good read, if you want something light with action, vampires and a some fan service this is the right novel for you!
0 Likes · Like Permalink | Report
Advertisements
Leave a Review (Guidelines)
You must be logged in to rate and post a review. Register an account to get started.

Acceptance of the Self