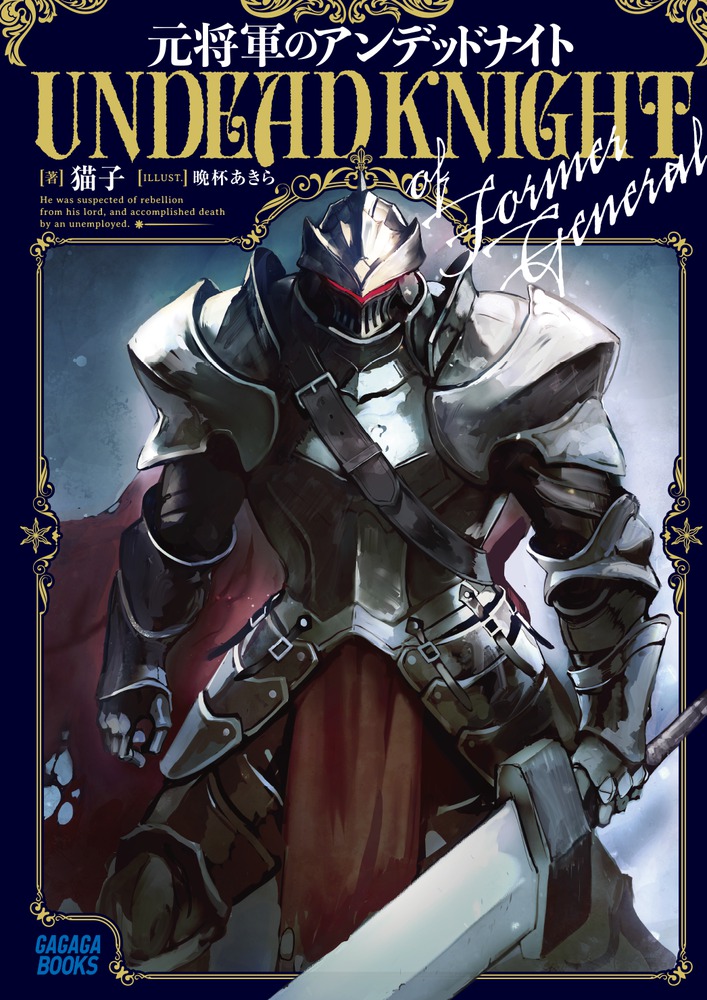 One entry per line
Shogakukan
Syosetu

Lambert, one of the great generals from Regios kingdom, was suspected for planning a rebellion against his lord at the end of unification war, and he died an unnatural death. Two hundred years later, when the era had changed and Regios kingdom had entered its peaceful era, he accidentally revived as a demon called Undead Knight… Lambert, whose entire body was wrapped in a flashy Demon Metal[Organ], set out on a journey to punish the wrongdoers while enjoying the peaceful sight of Regios kingdom. But… This peaceful era was basically an easy mode for Lambert, the greatest general of the chaotic era.

Betrayed and assassinated by his lord and his best friend, Lambert’s soul was unable to ascend to the heaven.

Two hundreds years later, he was revived as an undead. After finding out that the one who betrayed him has long since died, Lambert decided to take a trip around the kingdom.

Follow Lambert’s journey in his second life as an undead to seek for his own salvation as he kicking the ass of the villains along his journey.

One entry per line
Moto Shougun no Undead Knight
元将軍のアンデッドナイト

History’s Strongest Husband (1)
Even Though I’m a Former Noble and a Single Mother, My Daughters Are Too Cute and Working as an Adventurer Isn’t Too Much of a Hassle (1)
Stop, Friendly Fire! (1)

These are recommendation lists which contains Former General Is Undead Knight. You should give them a visit if you're looking for similar novels to read. Alternatively, you can also create your own list.
More Lists >>>

This is Basically Japanese version of wuxia, with non-human protagonist. Here MC status : MAX Strength MAX Speed MAX Defense MAX Technique ～ Stamina No Magic And his main opponent is Something akin to Giant Robot, or Immortal Vampire, or Immortal Transgender Necromancer. The plot kinda remind me of Fate/Zero. A romance above romance, a tale of faith and betrayal, with mix of yandere and headless horse.
6 Likes · Like Permalink | Report

Not going to lie the novel is a little slow at times. The summary is accurate, but the very different at the same time. I truly enjoyed it. (Kind of guessed the ending while closing in on the end, but none of the less still made me cry). Thankfully everything connects in the end (well, all but one but that is besides the point). The MC is overly OP, blunt and sometimes coldblooded with a side of cuteness (can I call an undead general cute?) that makes him more (even though... more>> he is dead) human. All in all I was happy to be able to find the novel as well as the raw because good god I'm impatient. <<less
2 Likes · Like Permalink | Report

I'm a sucker for very strong MCs that destroys arrogant enemies one sidedly. MC is not s*upidly strong like one shoting a god but just overpowered enough to call him broken. Also the MC is not like those sorry excuses of an isekai MC (the story is not an isekai, im just comparing the MC). The MC shows characteristics of a knight like he should but he will not hesitate to kill and deal with annoying problems the violent way. Not going to lie I would have given it a 5 star if... more>> the story just revolved around revenge but thats my opinion, the strory right now is also good. <<less
0 Likes · Like Permalink | Report

The background politics are already interesting and somewhat unique, being background politics. So I'm really looking forward to this! The author keeps emphasizing how super freaking abnormally strong the MC is. We get it. They are also mindful of how little the MC knows. It's almost to the point that I think he's a little slow. Just a bit. But I think that's good, I find OP characters that just wander around with a Protagonist's Aura pretty boring tbh. Death Notice (within human cap kind of OP) and Overlord have OP... more>> MCs know how to do it. So does Berserk, but Guts actually has a whole mountain to climb. <<less
0 Likes · Like Permalink | Report
Advertisements
Leave a Review (Guidelines)
You must be logged in to rate and post a review. Register an account to get started.