Novel Updates
RegisterLogin
Theme
Search
Your changes has been saved.
Advertisements
For Your Failed Unrequited Love 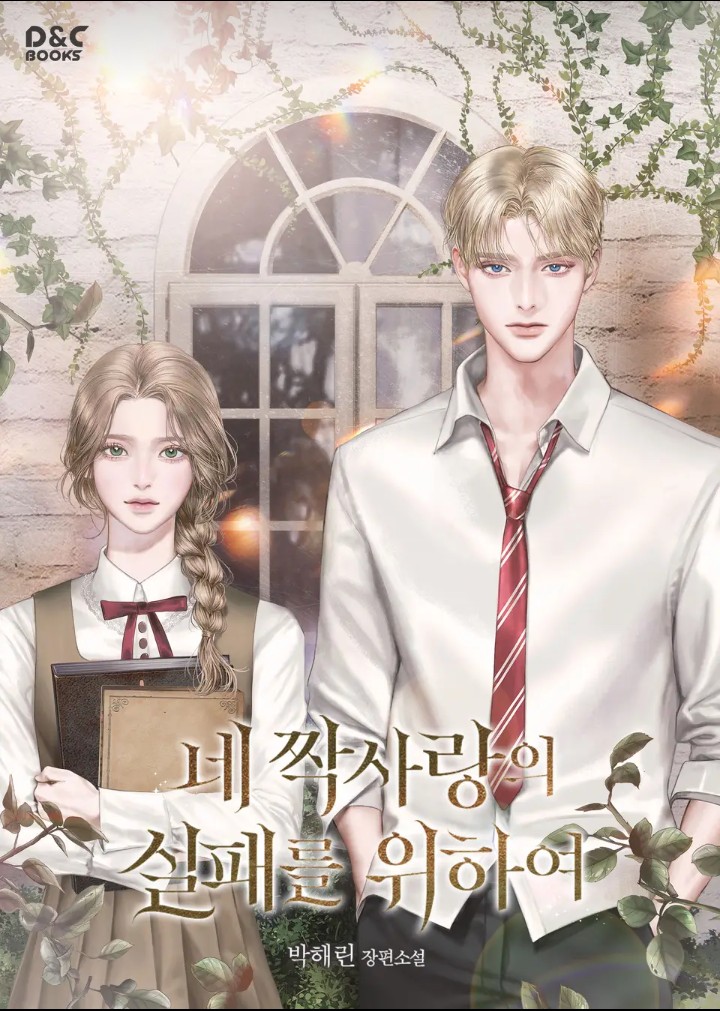 Status in Country of Origin. One entry per line
120 Chapters (Complete)

Celebrity of the Xenomium Academy.

Recently, there has been a person that annoys him.

The girl, who has a very unremarkable appearance and a calm personality, is the only one who can distinguish Felix from his identical twin Adrian like a ghost.

Whenever she meets him, she only has an expressionless face.

But when she meets Adrian, she smiles brightly.

When he is with her, her lips are shut.

And she only talks with Adrian.

Lucy Keenan has a crush on his twin brother Adrian.

As his curiosity for Lucy Keenan grows, Felix begins to question her. He has the same face, the same height, and the same voice, so why is it Adrian and not him?

It’s a bonus that I wanted to interrupt Lucy Keenan’s unrequited love for nothing.

These are recommendation lists which contains For Your Failed Unrequited Love. You should give them a visit if you're looking for similar novels to read. Alternatively, you can also create your own list.
More Lists >>>

The rate is 5 I accidentally put 4 idk how to edit it😭😭 I really love this novel, it really won't disappoint you. This novel is one of my favs and it's underrated !!! The story goes with a twins that really looked alike that you can't tell them apart except their attitude. Their name is Adrian Berg and Felix Berg (ML). The female lead is Lucy Keenan her hair is always neatly braided, she's a smart girl who can even tell them apart and she's also making medicines. The Male lead... more>> like to prank the female lead sometimes by pretending as his brother Adrian and FL sometimes fall by his jokes but she still notices that he is Felix not Adrian. The Male lead liked her because she can tell who's Felix or Adrian in the twins. Felix and Adrian's mother can't tell them apart, especially their mother liked Adrian more than Felix. There was this situation where they were only kids, Felix was beside his mother and his mother thought that he was Adrian so she gave something food to Felix (I think it's a candy) thinking that he was Adrian and said that "This is only our secret don't tell your brother " with a smile on her face. Felix just kept pretending that he's Adrian that time but he soon told her mother that he is Felix not Adrian. So that's the reason why he gave his attention/affection to the female lead. Plus she made a medicine for him because he is allergic to something. Talking about the female lead, she like Adrian because he's intelligent among the twins and Felix knew about it that he even helped her to be Adrian's partner to a partner. But little by little he liked the female lead, he's sometimes being childish to female lead so that he can get her attention. You guys should read this specially you're into school life romance fantasy!!! Anyways thank you so much for the translator I wish you wouldn't drop this good novel, I've been reading a lot of masterpiece novels but most of them are dropped 😭so please continue until it end, THANK YOUUU <<less
1 Likes · Like Permalink | Report

I personally really enjoy this novel. I've been looking into KR academy novels, and this one is so good. Like "Lois." said in their review, it feels like an observational diary of the ML. At first, you can see that he's really narcissistic and sometimes misunderstands things, but on the inside he really cares about others. He has a deep trauma that most people don't know and doesn't really have anyone he can depend on and show his true self to. Even his twin seems more mysterious as I read... more>> the novel. Reading his POV can be heartwarming and sad at the same time. I also like how he expresses his "curiosity" towards the FL. It feels really realistic, and because we mostly just know the ML's perspective, it makes it more pleasant to read. He begins to develop his feelings slowly by slowly, to where I don't think it's tiring to read. I hope the translator (s) will keep translating this novel. It updates frequently and the quality of the translation is delightful. <<less
4 Likes · Like Permalink | Report

Slow paced writing style. I like how the reason why the process of ML liking the FL is Explained straight off the bat but as I mentioned everything else progresses pretty slowly but it doesn't have a lot of "fluff" despite that, the story as of now kind of feels like an observational diary of the ML. It isn't that good but it's good enough to read. Translation is superb.
3 Likes · Like Permalink | Report
Advertisements
Leave a Review (Guidelines)
You must be logged in to rate and post a review. Register an account to get started.