Novel Updates
RegisterLogin
Theme
Search
Your changes has been saved.
Flowers for the Forest Beasts 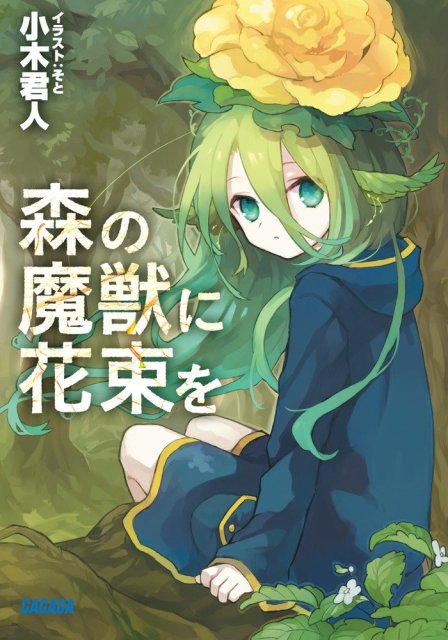 One entry per line
Soto
そと

One entry per line
Gagaga Bunko

In a world dominated by swords and magic, Cleo lives his lonely life where he believes painting is his sole purpose to life. Since Cleo was born in a noble family, he must prove himself worthy to become the family’s successor by participating in a certain trial. As he enters the forbidden forest, Cleo encounters a beast that is half human and half plant. After being easily captured by the beast that resembles a human girl, Cleo plans his escape by attracting the beast’s interest and keeping Cleo alive. Out of his expectations, the time they spent living with each other made him feel unbelievably relieved. However their calming daily life did not last very long…

One entry per line
Mori no Majyuu ni Hanataba wo
森の魔獣に花束を

These are recommendation lists which contains Flowers for the Forest Beasts. You should give them a visit if you're looking for similar novels to read. Alternatively, you can also create your own list.
More Lists >>>

It's not easy to find a Monster Girl romance without a harem, or excessive perversion, but if you're reading this review, then your search is over. I think this might be the sweetest boy meats monster girl story out there. There aren't many chapters, but each one is fairly long. In fact they are long enough that towards the end of the first chapter you might be getting a little bored of waiting for our girl in green to show up. That's not to say there is anything wrong with the... more>> MC, he is the week type but he isn't dense. It's just that he is a normal, if a sickly human being in a forest filled with dangerous beasts. He is realistic about his limitations. The most disappointing aspect of this story is that it ends just a little too soon.
Spoiler

We reach the end at the point where the next step in the couple's relationship will be the happy go lucky hand holding lovey dovey cuddle time stage. We are right at the payoff point when the author skips out on us and leaves the rest to our imagination.

It's not the best story ever, the characters are a bit shallow and you can see things coming from miles away.
There are a lot of descriptions and information blocks that add very little, the space could have been much better used to describe and flesh out the characters and their environment. They are from radically different species, but it is more of an excuse than anything else as it doesn't build on these differences and/or similarities. It is supposed to be a story where a strong human-looking beast comes to learn... more>> about positive emotions and appreciates art, but the storytelling manages to leave you with the feeling that the boy is a crafty monster tamer that made the monster that supposedly caught him into an entity that would not hesitate to sacrifice her own well being for him. Don't get me wrong, it's not the worst thing I have read, by a large margin, it's just that it seems to be going for a certain feel and fails to deliver. The translation is fine as expected from yoraikun, you are not going to have to suffer unedited machine translation, it is all in properly written English. (I guess reading this after re-reading the cicada dragon one does hurt it a lot, as they are very similar on the subject matter but so different in execution and quality) All in all, while it's certainly not something to remember for years, it's decent enough to waste a few hours if you are bored with nothing better to read. <<less
4 Likes · Like Permalink | Report

I'm not even sure why someone who didn't read it (and probably have a severe moodswing problem based on the reviews they previously wrote) gave this series a low rating, but who am I to judge? It's a simple short story. About a boy who seeks for a place where he truly belongs. He was ditched in the middle of the woods and met a maneater-flower humanoid beast (alraune?). The whole plot is about how they grow to notice their own feelings and grow fond with each other. Personally I think the... more>> epilogue is a bit rushed; I really hope to see more about the beginning of their love relationship in detail. But maybe an open end like that can be considered satisfying in its own way. Big thanks for Yoraikun, for bringing this series to the surface. <<less
1 Likes · Like Permalink | Report

This novel is beautiful! This simple story turned out to be so beautiful! What really made it stood out are the emotions that the main lead develops as the story progresses. The characters may seem weak at first, but that what makes their development beautiful! It really gives you a feeling of how beautiful and innocent an emotion called "love". And at the end, it makes the readers contemplate how beautiful the ending is. I would love to read some fanfics after the events of the epilogue. :D
1 Likes · Like Permalink | Report

I admit I cried. I'm partial to love stories. I adored this work. I usually disdain soft heated self centered characters who never let themselves value their own self worth. Who's self esteem leaves them empty. I usually dislike man eating monsters that kill and eat people. But. I love this story.
1 Likes · Like Permalink | Report

You might think it's a bit early for a review (as this novel was just posted on the site), but this novel just has a stupidly large amount of unnecessary descriptive text. Combine that with the sob story at the very start and the MC who's only character trait is being pessimistic (and likes art?). I would save it for later, but I have no intention of reading so much for so little. Also this a short story, but the chapters feel like they never end. ... more>>
Spoiler

Roselyne reacted strongly to that portion.
It's not as if the spottings of blue roses were few in number in the world. But their spotting sites shared a commonality, and they were often in the depths of forests humans rarely set foot in. What's more, if you tried to bring one back to grow more, once a week passes by, the blue color will drain away. Given a week, it becomes no more than an ordinary white rose. By the way, when a woman who was once a beauty completely changes in the span of only a few years, they might say, 'She was a blue rose'.
Whatever the case, blue roses were rare. While he had no intention to take one back and succeed the Grant House, since he had come all the way there, he did think he might as well see one at least once.

Some times, we need to get off from all those junk novels.
Some times, we need to think a bit more about life. On the educative plan, there are a few things we can learn from this story. 1: Building a fire pit 2: Grafting a plant onto another Emotionally, we can also dream or contemplate about this story. In the aspects of love and friendship.
0 Likes · Like Permalink | Report
Leave a Review (Guidelines)
You must be logged in to rate and post a review. Register an account to get started.

The Lady Knight and the Silver-Wolf-King-Nuadha

Rebirth as a Xenomorph in the...

I Reincarnated as A Little Girl?!
Advertisement