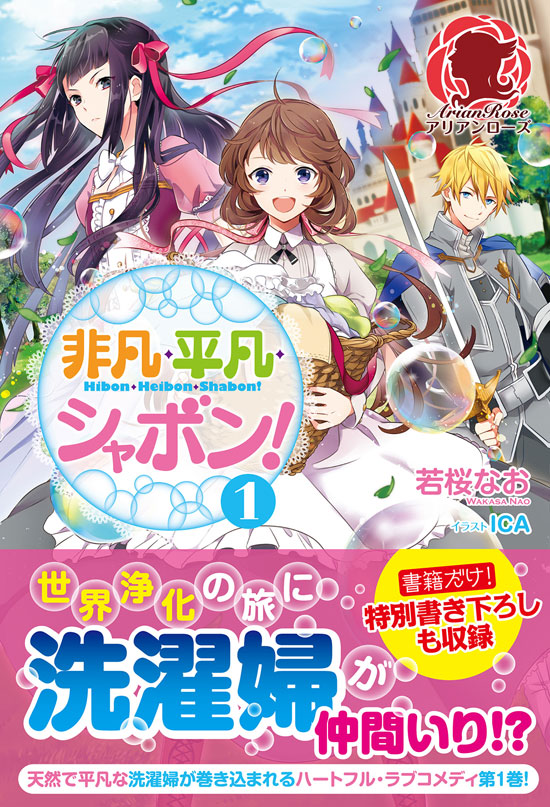 One entry per line
ICA

Lucia Arca, 16 years old. I am the prime representative of all things ordinary, but by using the shabby magical incantation “Soap!” I can only cause soap bubbles to appear. Through this, I perform the duties of a laundry girl employed by the royal castle.

I thought that this magic’s only effect was to clean dirt off from the washing. However, one day I found out it also has the additional effect of purifying monsters. And y’know, because of this it’s turned into a total disaster.

The Heavenly Crystal Trees acts as the intermediary of all magic, and they are also the root of the monster outbreak.

As I’m suddenly forced to accompany the journey to purify the Heavenly Crystal Tree, the companions joining me include His Highness the crown prince, a saint summoned from another world, the commander of the strongest knight brigade and his adjutant, the Dragonslayer Hero, the Academia institute’s top sorcerer, etc. etc. etc. With all the extraordinary people gathering together, I’m going to feel faint! I’m only ordinary!

Surrounded by these prodigies, once the Heavenly Crystal Trees’ purification safely ends, my daily life will return to normal. Right…?

These are recommendation lists which contains Extraordinary – Ordinary – Soap!. You should give them a visit if you're looking for similar novels to read. Alternatively, you can also create your own list.
More Lists >>>

So far so good. No ridiculousness of being too OP MC. MC is also quite humble, dopey, and most importantly FLOOFY!
Spoiler

The lunch date with Sir Celes was so floofy

[collapse]
The MC is likable in that she's well grounded in her world, too much so that she misunderstands things to humorous results and floofy-ness. My guess is that the author may make fun of the whole transported to another world genre a bit, which is always nice~
18 Likes · Like Permalink | Report

Ah, this story was nice while it lasted. It showed promise to be a fun read with the cutesy romance. And I was really anticipating seeing how the author would weaponize this rather really unique "Soap" skill that was only thought of as only useful for laundry. Unfortunately, the second translator said he got a Cease & Desist request, apparently so did the first translator, due to the author vying for a publishing deal.
16 Likes · Like Permalink | Report

I went and read the raws on syosetu coz no translator would touch this anymore. It's interesting due to the MC's ordinary but extraordinary power of conjuring soap bubbles. Not only supremely effective against the toughest stains, it also doubles as monster calming magic by washing away their aggression. Besides that we also have the dashing Celes-sama who has been pursuing the MC for months. MC is oblivious to his omg-so-cute attempts, and only regards him as a friend because she thinks he is way out of her league. Seeing the... more>> great Celes stutter and stumble around her is so moe! Gah, my heart! I could only get this far with GT. I suppose I have to learn Japanese now if I ever want to know what happens. <<less
11 Likes · Like Permalink | Report

I love the extreme misunderstandings of this tale so far. The dopey heroine has an amazing gift, the ability to clean anything with her "soap" power. Though I haven't gotten there yet, apparently, this will extend to monsters as well. The romance is why I read this though. Even though the heroine doesn't have any clue how important the guy she meets with is, their interactions are still extremely moe!
6 Likes · Like Permalink | Report

Adorably cute! You can't hate the heroine because she's just sweet and kind. Not in that overly sweet kind, but the normal one. She help other people, she befriend a knight, and she get scared too! It's nice when you got a normal MC with slight unique power.
4 Likes · Like Permalink | Report

My reviews are more often than not sprinkled with hints of spoilers, but they aren't necessary spoiler explicit. Regardless, it's best if you skim through this review if you aren't caught up with the translations or if you want to enjoy this story with a blank slate of mind. This review will probably NOT be updated as it seems that the translations were asked to stop by the author herself. EDIT:... so I say, but it seems another translator picked it up. As much as I'm grateful, I'm also worried about... more>> the author's response... This is a floofy fuzzy story of fluff. The two characters that stands out are our main character, who can be described as generic in a likable way, and her love interest, who's also generic in a likable way. Set in a medieval type of world, you get to read this story through the eyes of a side character. The MC and her love interests are a sweet couple that makes you want to support and cheer for them. What makes the read so enjoyable are the character interactions and the writing itself; it's simple but calming to read. There's a small twist that may lead to a long story, but it seems we won't get to see how it'll turn out. I tend to like death, plot & politics, so know that my rating comes from my and only my personal preferences. I also can't give this a much higher score because there aren't any other characters or interesting plot twists that we can see especially since the translations seems to have officially stopped. Regardless, the translations, sweetness, and simplicity are its charms. <<less
3 Likes · Like Permalink | Report

This review is based on the official English release. ... more>>
Spoiler

The series started slow and includes some annoying tropes like attempted r*pe but overall it's short and charming. The female lead is dense but luckily the series itself is short enough that we'll see her character/romantic development pretty shortly. The rival character started off very annoying and I could understand if some reader are turned off by her, but again due to the short length of the series, she quickly got her character developed and end up being a very nice girl.

The twist are not unexpected but still feel tense and the pay-off/resolution feels great (though like the twist, the resolution is also not unpredictable).

Overall the series is short enough that you don't mind it's shortcoming, and the ending is very pleasant to read, it's a series that get better as it nears the end and end off at a much better note than when it started.

[collapse]
The start of the series is pretty slow, but by the end of the first volume it get better. The last (3rd) volume/ending is also pretty great. Give it a chance if you want to read something short and sweet. <<less
2 Likes · Like Permalink | Report

No one said this was a harem. It seems like it'll be a cute and fluffy story from now on. The heroine is a bit dopey but she's earnest. The story is well paced but I urged to plot to move a bit faster for a reunion. The main love interest seems to be a earnest guy so far, he has a reputation but his persona makes his debut appearance all the more adorable. Its a good story to pass the time but it isn't like the usual novel. One, the main character... more>> is earnest and doesn't over estimate herself. Two, the romance seems to be genuine in its own way, the MC being a "dense" protagonist is perfectly reasonable. But three... it seems that drama is already behind foreshadowed... I'm not sure what will happen. The story is good so far. <<less
1 Likes · Like Permalink | Report

Haha, so far, I'm loving this. I'll wait for the chapters to pile up. Thank you in advance translator-san :)
1 Likes · Like Permalink | Report

Read the first volume of the light novel series, so translation was pretty good. I think this might work as a story for 10-13 year old girls, though the bad guy in the end is a rapist, so I don't know. The main character mostly behaves like a very sweet and charming eight year old of average intelligence. Mind you, she is actually 16. It is actually a plot point she doesn't make a connection between Sir. Celes the young dashing blond she eats lunch with and Captain Celestico (?), the young... more>> dashing blond captain. Ha ha, how quaint... no, I'm sorry, she is just pretty... Also, because she is the MC and she has to solve problems in the world, the problems are dumbed down to her level. Basically no one behaves like an adult, it feels very cutesy and pink and stuff. I feel confident that in the second novel, there will be some monster, possibly a unicorn, that causes mayhem around town because it hasa thron stuck in its forepaw and only the MC is brilliant and brave and imaginative enough to think of this and solve the day. That is the level of the stories. It also kills me, the author desperately tries to push the idea one shouldn't solve their problems with magic, while at the same time every single serious problem in the novel is solved with magic, and the whole main conflict is about using magic to purify a magic tree that makes magic. What is wrong with using magic in a world where magic is real ? It isn't like it is even free, you get tired after using it. How is different from other forms of work ? <<less
0 Likes · Like Permalink | Report

This is good, a slow pure romance between side character (?) Their interaction is so sweet and fluffy and no OP
0 Likes · Like Permalink | Report

Nice fluffy sweet, I can't find enough words to describe it! But I perhaps have been reading way too many vilianess type novels but I am seriously wondering if the "saint" is a good friendly girl or a self entitled heroine... I hope I am wrong for Lucia's sake!
0 Likes · Like Permalink | Report
Advertisements
Leave a Review (Guidelines)
You must be logged in to rate and post a review. Register an account to get started.