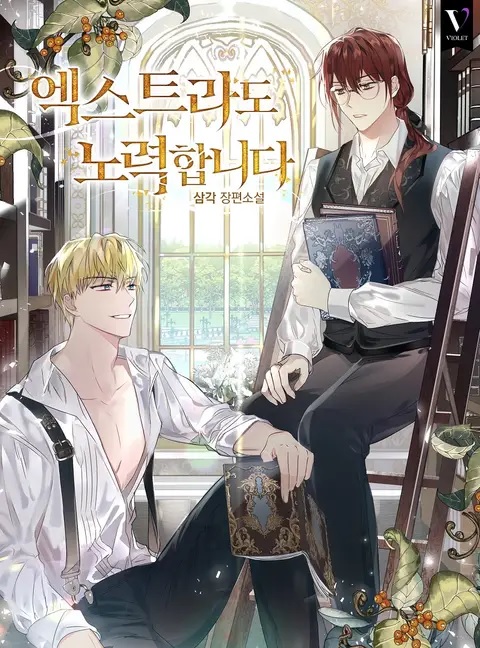 One entry per line
삼각

Status in Country of Origin. One entry per line
199 Chapters (Ongoing)

One entry per line
Violet

A train journey to escape from reality.

When I came to my senses at some point, I felt like I was in a fantasy novel I had been reading a while ago.

It was also possessed by the body of an extra whose name was not mentioned in the original work!

‘Does this make sense?!’

The original work had already begun without the man even getting to his senses.

The man, now ‘Nathan Norbert’, tried to make a connection with the original protagonist in order to survive from the original incident that would take place three years later…

“What are you doing there?”

It was a good thing there was no backlighting. If there were, he wouldn’t have noticed immediately who the boy standing in front of him was.

The gold colour, like melted gold, shimmered even in the gloomy weather. His cool eyes were slightly frowning as if puzzled and, blue like the summer sky, were looking straight at Nathan.

This person is Hazard.

His name is Hazard Erasmus.

Indeed, the boy in front of him was exactly what Nathan had envisioned while reading . So he had no choice but to recognize it at a glance. He couldn’t have dared to imagine a protagonist other than this figure.

These are recommendation lists which contains Extra Works Hard. You should give them a visit if you're looking for similar novels to read. Alternatively, you can also create your own list.
More Lists >>>

OMG I'm relieved to see that this novel is getting translated again! I'm only in chapter 9 right now and gosh its good. You guys should read it, like others said the MC in this novel is realistic because he asked himself how and why did he got transported here and all sorts of emotional rollercoaster. And yes the ML I don't know much about him but he appeared at chapter 6.
0 Likes · Like Permalink | Report

Before I say anything else, I want to not that this novel is NOT written in first person, but third person (for once). The plot: ... more>>
Spoiler

The original world was based off of magic, swordsmanship, and other supernatural elements. The OG Protagonist (and also the ML) is named Hazard Erasmus and he is basically like Zelda (from Legends of Zelda). He attends an academy, some kind of seal is undone, demons start to rampage, and he collects companions to save the world.
Then comes our MC who was just minding his own business on his highly anticipated train ride (because he's never been outside of Korea before), then *poof* he arrives in an unfamiliar world. Like any RATIONAL person, he started to panic and a sting of elements followed through.

[collapse]
Truthfully, I find the protagonists actions quite realistic. Unlike other MCs, the main character is actually panicked when he gets transferred into this unknown world and experiences many emotions that others may have when suddenly put into an unfamiliar environment. Additionally, he doesn't suddenly inherit a golden finger and actually has to work hard to gain results, even if it harms his own body. His character is very well fleshed out and holds his own feelings and desires. The readers can feel that when he first transmigrated over, even though he broke down at times, the MC truly did hold some expectations for his future. He hadn't wanted to become some cool protagonist or side character, but just someone who would be remembered. It didn't matter if it was one person or a hundred people, he just didn't want to go down as that one person among the crowd whom no-one knew. The MC also has a slightly childish side because he sometimes doesn't understand why he's scolded and often wants to get praised. Yes, some of his actions are hypocritical, but then again, no one is perfect and for someone who was thrown into the body of a random unknown character who literally has no potential in magic or swordsmanship, he is already considered pretty good to me. Not to mention, the MC knows that the world will fall into ruin within 3 years, so he is working hard to do anything he can to protect himself. <<less
12 Likes · Like Permalink | Report

The MC has a very realistic reaction when first waking up in this world. The story has a nice serious tone that doesn't overcomplicate things which is a refreshing change from the other fantasy novels with a more light-hearted/fluffy setting.
2 Likes · Like Permalink | Report

"It's an amazing story" I love how things are developing till now the characters, plot, and theme were great, especially MC who shows realistic reactions to his situations unlike other protagonists I recommend it to everyone! PS: I hope the translations can be sped up. pls, translate it! I can't wait to see how this story goes...
1 Likes · Like Permalink | Report

Really love mc's initial reaction upon finding out he's in some stranger's body, he gets flustered and start panicking, but still make it work out. MC is not the usual op character, his body is a wreck, and the initial magic is less then average, but still works really hard to achieve his desired results, and in that aspect, the title is spot on. It seems that translation was dropped for some reason, and I really hope someone picks this up.
0 Likes · Like Permalink | Report
Advertisements
Leave a Review (Guidelines)
You must be logged in to rate and post a review. Register an account to get started.

Quest Around the Multiverse
Advertisements