Novel Updates
RegisterLogin
Theme
Search
Your changes has been saved.
Advertisements
Ever Ever After

Home >
Novel >
Ever Ever After 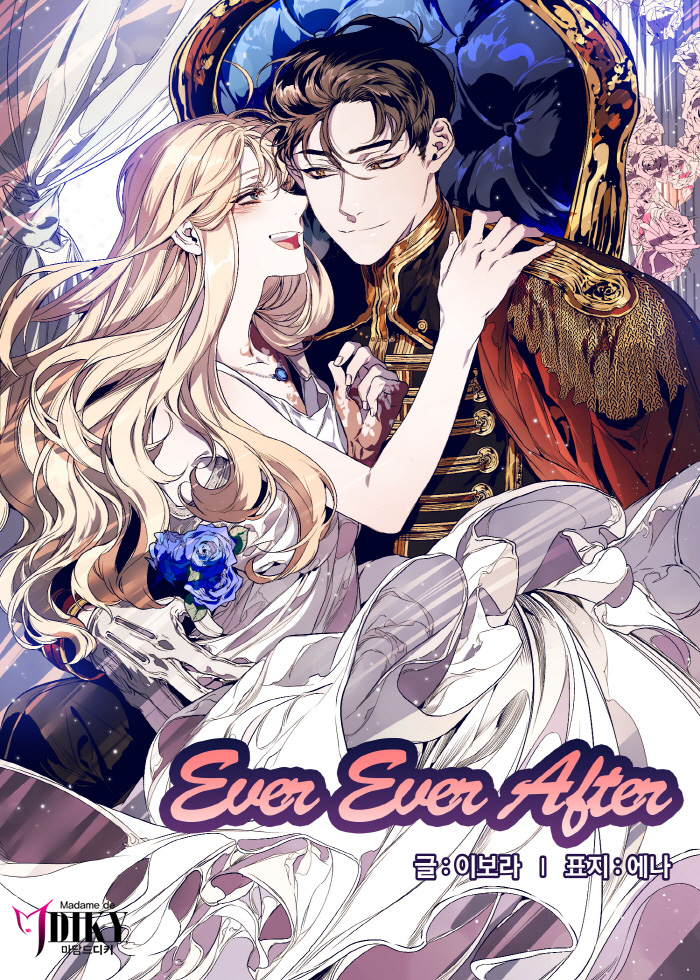 One entry per line
Lee Bora

Ailea Elgar Euliana, she met her death by the hands of the Crown Prince, her fiancé and the man she thought was her Prince Charming and true love’s kiss.

In her wedding dress, she closed her eyes and burned to death in the castle that set afire in blazing flames.

That was her end.

But, she returned to the past, realizing how foolish she was to cling onto the love she thought they had, and so she begins to live for herself and without regrets. On her journey of self discovery, she meets someone new…

One entry per line
EEA
Ever Ever After 소설

These are recommendation lists which contains Ever Ever After. You should give them a visit if you're looking for similar novels to read. Alternatively, you can also create your own list.
More Lists >>>

This novel is great, interesting while at the same time, a wonderful love story between a knight and an ex-crown princess. One of the things I love is that both ML and FL are not perfect due to their own circumstances. But they both will experience character growth and I love that we will be there to experience along with them. Disclaimer: Yes, the male lead WAS a playboy. But that was for a reason. ... more>>
Spoiler

The emperor and the crown prince are power-crazed a-holes. They can't stand anyone more talented or have higher fame than them so they send talented knights to suicide missions, including FL's father. Hence, as a coping mechanisms and shield to protect himself, ML posed himself as a s*upid playboy. He use his looks and personality to make him look useless and only has his brain under his pants. He said the women came to him so he just accepts.

He did become regretful after meeting FL and apologize to her for what he had done.

[collapse]
However, ML have rules (read chap 8) and sticks to one night stands and doesn't lead people on. The women know what they are into when they look for him and none expects anything back other than a fun time. But once he meets the FL and knows that she's the one for him, he stops. He respects the FL and becomes one of the most respectful and loving MLs. From the very beginning, he doesn't care at all about her scars and loves her for who she is.
Spoiler

FL is cursed by the crown prince's girlfriend (they didn't know this yet and thought it was a disease) and ML found out he can do something about it. So he cast a recovery spell that allows them to share the curse. So like in the cover, the scar reduced to half and ML has some on his arm. This is even before he got to know the FL properly.

[collapse]
FL is not a badass B but she is a queen of her own.
Spoiler

She was sent to the palace as sacrificial pawn for the crown prince at the age of 13. The crown prince wasn't interested in her, so he gave excuses and kept delaying the marriage. She was bullied and mistreated for 9 years until her death before she was reborn.

After she's reborn, she became independent and had to do things on her own because nobody is beside her. Some spoiler said that once she and ML are together both of them will become an OP couple with both intelligence and strength (kinda remind me of ML and FL from Light and Shadow.)

[collapse]
Hence, please don't be so quick to judge. A few chapters that were divided into parts is not enough to justify a character. The ML is not the worse there is. He does not kill or torture people's parents and grandparents, he put importance on consents and very respectful towards women. I'm saying this because you may or may not read somewhere where people are judging the ML which may turn you off but please don't make people's judgement clouded your thinking. Just because his "perfections" and "flaws" are different from the cliche "perfect from the start" MLs doesn't mean that he's horrible and their love story isn't worth reading. So give this novel a chance and who knows, maybe you'll fall in love too ;) <<less
26 Likes · Like Permalink | Report

This is sooo interesting, I was just browsing and was curious to try reading this but I'm really glad I did! All characters especially the FL and ML are realistic.. Others might not like the ML saying he's a playboy duh he has standards though and he's single so he can play around all he wants and its not like he's the one who seduce them ? On the other lart I love the part where he respected the MC in a different way and how they develope!! Arghhh I... more>> cant wait for the updates ❤❤❤ TY So much for translating this !!! <<less
12 Likes · Like Permalink | Report

I like the dynamic between Ailea and Clint. Even though Clint's a bit of a playboy he has a code of conduct. I hope that Ailea has a chance to get away from her shitty fiancé Lawrence in her new life. Definitely give this a read if you have time to spare it's really interesting.
12 Likes · Like Permalink | Report

Loving this novel, the MC takes an independent stance instead of her escape plan solely relying on a new man. I'm also digging the ML which I didn't expect based on how he was introduced (not really a fan of playboy MLs for the most part). The ML seems to be a really sweet kid so far and the chemistry between him and the MC is pretty promising considering there's only a few chapters out. The novel is also doing a really good job of making me hate her Fiance's... more>> guts, but it also makes me question why/how him and the ML get along and why in the world MC fell for him in her first life. <<less
7 Likes · Like Permalink | Report

all I can say is wow I literally just read ever ever after to pass time because I was board and it was in my recommendation but woah it was the best accident lmao. first the the relationship between the ML and FL is soo wholesome and I can say that he is the most adorable ML i've seen and the way he was introduced in the story LMAO ? sec I thought that the story was going to be typical reincarnation novel which was actually not I was surprised when ... more>>
Spoiler

the FL didn't go back before going to the capital but even to where she already got the disease and how didn't take the " I'm going to marry someone else to escape " route and instead depend on herself.

[collapse]
i adore this novel <<less
7 Likes · Like Permalink | Report

The female protagonist is very lovable and the male lead is decent, the character development is on point. There is also bit of angst! Super Worth it!
5 Likes · Like Permalink | Report

Looks promising, I'm on chapter 16 and so far I love both the MC and ML. Some things took me for surprise but I'm glad I kept reading it. A part of me feels that I'm gonna cry with this (both happiness and sadness haha), I reccomend it! (I'll come back after more chapters)
3 Likes · Like Permalink | Report

It was really rushed and really cliché. All the characters seem pretty shallow, and both the emperor and his son seem really dumb.
2 Likes · Like Permalink | Report

I unexpectedly love this!! I was into the novel I didn't even realize I reached the latest chapter lol please give this story a chance. My heard aches for the FL and I despise the retched prince. Just saying but not all novels make me feel for the characters. 5/5 ???
2 Likes · Like Permalink | Report

Story is fun to read, I can't wait to see the relationship between the FL and ML progresses. They both seem so sweet and honest with each other that it is a refreshing story.
1 Likes · Like Permalink | Report

This is a very interesting read, the main characters are very likable and they act like real people instead of an ideal person that the author has conjured up. There is good character development even in the short amount of chapters that are out right now. I for one am really glad that it had been picked up again. Looking forward to reading it further when it updates.
1 Likes · Like Permalink | Report
Advertisements
Leave a Review (Guidelines)
You must be logged in to rate and post a review. Register an account to get started.