Novel Updates
RegisterLogin
Theme
Search
Your changes has been saved.
Advertisements
Entertainment Life With A Camera 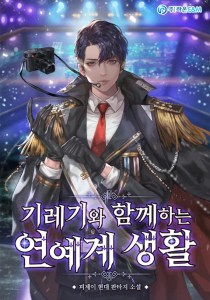 Status in Country of Origin. One entry per line
340 Chapters (Complete)

One entry per line
Raon E&M

He almost became a Hallyu star and his biggest career in entertainment was placing 12th in an idol survival program.

The works he rejected were enormously successful, but every work he went into was destroyed one after another.

This frigging damn unfortunate life played around by false hope actually saved a country in his previous life.

So when he came back to his original body, there was a face genius standing in the mirror.

*Face genius: a Korean slang term for someone who is very good looking

These are recommendation lists which contains Entertainment Life With A Camera. You should give them a visit if you're looking for similar novels to read. Alternatively, you can also create your own list.
More Lists >>>

The translator here~ I have read this completely except the side stories. Yet, it felt fun again when I read while translating. I just wanna grab the non-existent light stick and cheer them on! It's been a while since I'm fangirling hm hm. This novel is a pretty nice introduction to K-fan culture for international fans who don't go deep to that side. The novel have the usual all-perfect MC from a glance, but the story is quite solid (especially the background details really show how much the author know about idols) and... more>> realistic as most the events happened in novel referenced to real events with some twist. E.g. Project Idol is Produce 101, but the detail is quite different and not just simply change a few letters of actual person's name (often see this in other novels). Early parts not yet shown the other members much, but after a while it will tell their stories too. The novel will shows the teamwork of an 'ideal group' and MC's side gigs through many interesting events. Beside the up and down of being an idol, this novel also shows the bad side of entertainment world (although not that deep as this focused more in our perfect MC). Later in the back some arcs will be boring. It's understandable as maybe the author was tired chasing release schedule which was almost daily if I remembered it right. A clue of Jin identity for those who read this review:
Spoiler

Look at Associated Names here. The Korean title is sooooo much obvious that I modify the English title hahaha

[collapse]
p.s. I'm sorry for my messy English in this review and also my translations... <<less
13 Likes · Like Permalink | Report

My actual rating is 3.5/5. It is not bad, just not so impressive. I don't see in the tag, but is this novel Slice of Life? Because as far as I read, the story is all about every day life of MC and his band mates and their journey to stardom; like how they run the schedules, cope with fans, broadcasting stations, as well as other external and mental issues, etc. the first 100 chapters (a.k.a rookie days) is interesting and fun to read. The narrative is good, the plot is simple... more>> and easygoing, the characters are likable, the pacing is good and relaxing, and there are enough problems and obstacles for the group to challenge, which make the story enjoyable and worth following. I strongly sympathize with the MC in his previous life, and really wish he can accomplish his dream in this life. However, after the first 100 or so chapters, the story appears monotonous and gets more and more boring (and this come from me who usually enjoy Slice of Life so much, no matter how slow paced the story is.) 😢 despite the author constantly adding things to the story and the story itself isn't bad at all, its lack of excitement make it really hard to read for a long time since the story kinda become dull, hence I lost my interest. As an Idol fan for 10+ years, I could say the story is >90% accurate. The references and circumstances are all on point.
Spoiler

as someone who has both fansite and sasaeng friends, I can guarantee that their behaviours are practically the same in real life. 😅

[collapse]
It's realistic enough to make me engage to the story, yet like a double-edged sword, since the events and story directions are mostly predictable, I couldn't help but get bored as the story progresses. Honestly, I'm now gritting my teeth to hurriedly finish the story since I have a feeling I might never pick this up again if I ever dropped it halfway. Nevertheless, I appreciate MC and the bonds between him and his members a lot. It's really good to see him being sincere and loyal to his friends and his fans. ❤️ Thank you for the translation! <<less
6 Likes · Like Permalink | Report

unexpectedly this is exciting.. The plot is not boring, the plot is also very fitting. As a fangirl I love this story hahaa.. It's light and not too dizzy when reading it, suitable to read when you need something fun, lol. But to be honest this is making me addicted hahaa, I haven't found an interesting story again after a long time, so i'll try to find the mtl
3 Likes · Like Permalink | Report

It's a good read, the plot is not that deep and it's enjoying to see him achieve his dreams in his second/original body. I also like how the group had conflicts and resolved it by talking and understanding each other. I already know how fcked up entertainment industry is but it still makes me sad thinking that there are people who experienced the same suffering our MC went through. ... more>>
Spoiler

I thought the camera in the cover was just a magical item that will help the MC, never thought that it'll talk lol. That one scene tho where he keep telling the MC to just don't mind his group members since being an actor is the goal he set in his second life. He (Jin/the camera) is treating them like a stepping stone and there I feel that he kinda susss. Even though he's helping the MC... he's like the devil and the guardian at the same time lolol, I don't hate him tho. There are also some part I agree with Jin.

I read ahead a bit and had to give up once I hit a pay wall. (It got a lil too complicated trying to pay..) I found it on ridibooks, just make sure you read it on chrome so you can mtl. It wasn't the easiest mtl to read so once it's translated I'll reread. It's such a good story so far. Thanks to the translator for picking it up! The MC has shown so much growth and he's not incredibly OP. The rest of his group is slowing getting some character... more>> development too. <<less
2 Likes · Like Permalink | Report

only giving this a 5/5 bc I feel like the ratings are way too low atm, though I feel like it's more of a 3.5-4/5. Personally, I'm really interested in how this is going to go, even if the character is an obvious gary stu (which tbh, I dont mind as long as the author throws in enough hardships/interesting events to either challenge him or stir up action). i've only read like the 5 translated chapters so far, so there's rlly not enough for me to make a long review on.
2 Likes · Like Permalink | Report
Leave a Review (Guidelines)
You must be logged in to rate and post a review. Register an account to get started.

A Terrible Evil Villain And Their...

I Became the Manager of the...
Advertisements