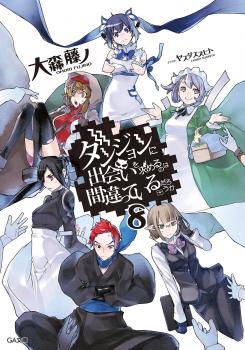 Status in Country of Origin. One entry per line
17 Volumes (Ongoing)

Is it wrong to face the perils of Dungeon alone, in a single-member guild blessed by a failed goddess? Maybe. Is it wrong to dream of playing hero to hapless maidens in Dungeon? Maybe not. After one misguided adventure, Bell quickly discovers that anything can happen in the labyrinth-even chance encounters with beautiful women. Only problem? He’s the one who winds up the damsel in distress!

One entry per line
Can't I Expect a Chance Encounter in the Dungeon?
DanMachi
Is It Wrong to Try to Pick Up Girls in a Dungeon?
Liệu Có Sai Lầm Khi Tìm Kiếm Cuộc Gặp Gỡ Định Mệnh Trong Dungeon?
ダンジョンに出会いを求めるのは間違っているだろうか
在地下城寻求邂逅是否搞错了什么

These are recommendation lists which contains Dungeon ni Deai o Motomeru no wa Machigatte Iru Darou ka. You should give them a visit if you're looking for similar novels to read. Alternatively, you can also create your own list.
More Lists >>>

Update from v5 to v9: lowering the rating from 3.5 to 3 Rating: 3, Translation: 5 [Rating/Translation scale: 5 = almost all readers may enjoy / infrequent minor errors. 4 = large majority of readers may enjoy / frequent minor errors or infrequent major errors, no difficulty to read. 3 = 50% of readers may enjoy / frequent major errors, unable to understand some sentences or a paragraph in a chapter. 2 = niche audience may enjoy / unable to understand moderate portion of a chapter. 1 = portion of niche audience... more>> may enjoy / unable to understand most of a chapter.] A 14-y.o. Orphan farm-boy in a fantasy world goes to the dungeon city to become an adventurer. In this world, adventurers receive game-like levels, stats, and abilities through tattoos given by patron gods who have descended from another dimension. The MC starts off with no experience, being the sole member of a new goddess's guild, with the goal of becoming a hero with a harem. Positives: Feels like a full-fledged novel series: full scenes and full storyline. Interesting mechanics on how adventuring works. MC starts off at zero, and has to overcome challenges each time he wants to advance to the next level. There seems to be a surprise in the backstory to the MC, but the author takes a very long time to reveal occasional hints. Major Negatives: Some readers may dislike the MC. He has a cheat ability to level up dozens of times faster than anyone else. Almost every girl falls for him (usually for no reason), while he is totally oblivious and awkward around girls. He is extremely naive or impulsive. He is always stammering with exaggerated body language. His personality does not change, he does not get any less naive or oblivious even after 9 volumes. The story's setting is bizarre and very depressing. The story seems to target teens, but the setting is more about personal violence, rather than typical adventuring/fantasy violence. The dungeon city is lawless. People murder, assault, kidnap/r*pe each other, sometimes on orders of their gods, often with no consequence. Adventurers are like s*aves to their gods; they can only leave their guild with permission or run away. Many of the story arcs surround these types of violence, yet the MC never gets any more street smart. Although MC gains levels/income/harem, the world never improves and stays depressing/lawless. There are s*x s*aves and implied r*pe, but for some reason the author keeps calling the victims prostit**es. I don't know if this is some kind of cultural thing, like the Japan WWII "comfort women" issue. Minor negatives: The story's scope is small. The setting is limited to the dungeon city, and the dungeon below the city. There's no romance, just scenes of MC being embarrassed, and the girls being shy or jealous of each other. Fighting scenes have annoying yelling or animal sounds in every page, or these overused sentences that are just exclamation marks. There are long explanations that I start skimming over. Overall: Fair fantasy story about adventurers/dungeon diving. There are some major and minor issues, but they become more and more obvious when reading past volume 5 (which is where the anime stops). Personally, I eventually got tired of the MC and the story, but I think at least half of fantasy readers would disagree with me. Other info: The anime goes through volumes 1 through 5. There are currently 11 volumes. Yen Press has translated 9 volumes, and you may need to read those as the fan translations are legally not available. <<less
19 Likes · Like Permalink | Report

A true masterpiece of a novel. If you haven't read Danmachi yet, you are truly missing out. If by the time you finish reading this review you still haven't decided to read the novel, watch the anime and come back! Here are some core points: The protagonist is not OP from the get go, but he grows at an incredible pace and does his best to overcome the obstacles on his path. I can almost guarantee that even if you solely read novels with OP protagonists, you will love this one. On... more>> the other hand, even if you hate OP protagonists, you will probably still love it. All side characters are well developed and interesting. There are no filler characters, and all of them play their roles properly. The world itself is very simple, and yet, very captivating. This is a dungeon-crawler novel, but this does not mean that all the events take place in a dungeon. You will see plenty of world development, however it is on a much smaller scale than in other novels (In Danmachi, this is a very good thing tho.). The story progresses at an amazing pace. I never got bored while reading this novel. The development of the protagonist is apparent. In most novels, the protagonist pretty much remains the same person from beginning to end. This is not the case in Danmachi. You will see clear differences between Bell in vol 1 and Bell in vol 11, and the growth itself is not spontaneous but well-paced. The action scenes are some of the best out there. And by best, I don't mean tons of explosions and flashy spells, I mean that you actually experience the battle as if you were the protagonist. You experience all the emotions behind Bell's decisions and actions, as well as all the pain he goes through. Danmachi has a decent sense of humor (if you like silly humor that is). At times it actually made me laugh, and it is worth mentioning that it is incredibly hard to make me laugh. Lastly, from the start, the protagonist is by no means a genius. He is kinda average, with an inclination towards being a bit too simple, due to how innocent he is. But this is also part of said character development, as he noticeably grows as the story progresses. All in all, if you don't like fantasy and character growth, then Danmachi is probably not for you. However, I believe that there are very few people that would not enjoy danmachi. <<less
11 Likes · Like Permalink | Report

This light novel is a beast! The author cuts all the bullsh*t and tells you a fairy tail story about Bell Cranel and his friends. There is no filler words in this novel. Translation is done flawlessly! You won't find plot holes in this light novel, the story is air tight. There is an anime adaptation of this light novel that is beautifuly done, for those that aren't into books, the anime follows closely the books story, and for those that can't get enought of the light novel I recommand... more>> watching the anime! <<less
6 Likes · Like Permalink | Report

A light novel that has a lot of potential at first. It's still okay, but as we progress through the story, let's just say some things don't work out that well. Let's start from the MC. But don't get me wrong yet. Now there's a lot of things that we should criticize. Such as, That being said, I won't rate this 3. Why? Because author is quite skillful in describing the battle scene. It's quite addictive reading up how Bell clashed with all his enemies. Vol 14 has about 400+ pages and most of it consisted of the battle scene, and yet I was able to read this book in just a few hours. These kind of moments get you absorbed. I don't think the series is being explicit. Like having fetish bs, straight disrespecting women or what, not really. S*avery and prostitution exist in this novel yes, but I feel like the author take this kind of topic in a somewhat soft way? This novel tried to stay away from being straight dark because well, pure heroism tale. And really, those kind of thing exist in the past in real life y'know. And since this series is closely related with Norse, Greek and other mythology, I think I'd say it's okay. The civilization is like way back, so things like s*avery is a common thing. And I don't think girls just fall in love with Bell for like no reason. That's wrong. There's more girls in the series that is in love with him, but discussing it further just makes me look like a creep. Even if it has some bullsh*t like the generous plot armor, 4.0 is a pretty deserved score. In the scale of 1-10, I will probably give 7.8 - 8.0. Unless Omori f*cked this novel even further that is.
4 Likes · Like Permalink | Report

Japanese - Dense Harem Easily Embarrassed Protagonist Korean - Spear Using Reincarnated Edge Lord chinese - literally anything from a wuxia is a cliché... more>> simply put this is only a cliché Japanese character in a somewhat interesting labyrinth (only thing im interested in) that wont get explained/explored properly for 99volumes with everything crammed in the last 1 with glaring plotholes or at least thats how I feel in my opinion and how you should and I read it, just skip/skim alot of it the "blushes coughs looksaway cringe 12yearoldinlove" clichés and the fight scenes which will end in "MC was fast, he got hit, he goes back and gets healed from near death, oh this girl he met on the way fell in love with him because he said excuse me and some ******* god looked at him" just as soon as you see that familiar sh*t starting to roll into your eyeballs, resist that eyeroll and skip 10 pages, or whatever your reading this on, just skip until you see him "Go Back To Normal" and get back onto the subject that needs to be talked about <<less
1 Likes · Like Permalink | Report
Leave a Review (Guidelines)
You must be logged in to rate and post a review. Register an account to get started.