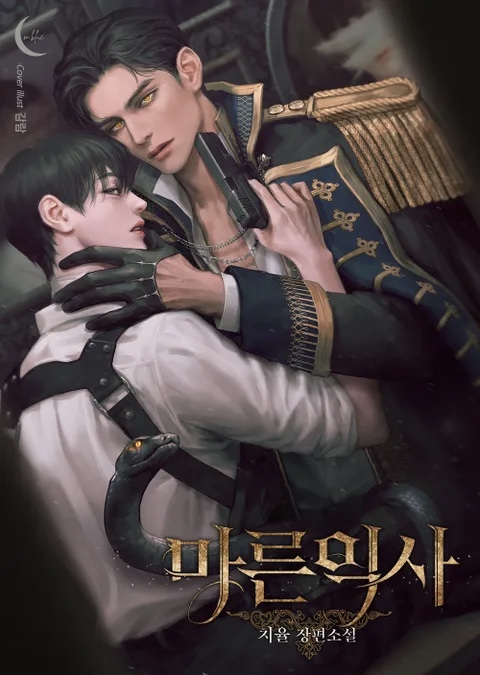 Ian, who was a hitman, finishes his last mission and drives the knife across his neck.

[I’ve never seen the place where I woke up after I stopped breathing.]

Somewhere with strange people and endless dark forest.
One could occasionally hear crying at dawn.

As soon as he realized that he was in someone else’s body named ‘Ian’, the high gates were opened, and he met the owner of the mansion, who had blue blood on him; the color of the serpent.

“I’ve been worried a lot since you got back covered in blood.
It’s good to see you breathing fine.”

His hair disheveled and as dark as the night. Tall, dark skinned with slender eyes, the aura around him felt slightly dominant.

[Ah, he’s the man I had already killed.]

Ian realizes the moment he looks at his face,

He can’t think of his name or the reason why I killed him.
The man had a suspicious attitude….

One entry per line
마른익사

These are recommendation lists which contains Dry Drowning. You should give them a visit if you're looking for similar novels to read. Alternatively, you can also create your own list.
More Lists >>>

I-- love it. I don't know why there aren't spoiler threads for this. It has cliff hanger but it's so good that it has me craving for more, I really hope this to have a satisfactory ending because I don't know what I would do if it hasn't.
8 Likes · Like Permalink | Report

The novel is so good, give it a chance....I admit the first 2-3 chapters were a little confusing but continue reading bc it gets so good.. the MC is so 🔥 👌 😍 ❤ 💯 I don't know how to describe him... he is just good!! He seems real...I love all transmigration/reincarnation novels that I have read but sometimes the MC seems to OP... I mean how is it that you because you were a chef in your past life now that you have reincarnated you have super healing and... more>> money making powers?? How is it that having some mecha knowledge from the PAST makes you a mecha genius in the future?? How is it that bc you were an actor then in this new life you are an actor god?? HOW?? Do they not have other actors there?? What makes you special?? Make it make sense!! This main character comes into the new world confused... which is a very natural reaction.... he doesnt come in with extra "memories" of this new place... in fact...I'm not going to spoil it..... just that the MC has his own set of skills and shortcomings....I honestly don't know how to describe how great and interesting I find him.. Read the book and give thanks to the translator, the original work seems hard to translate. P.s this is my first review and I'm sure its a vomit of words and emojis 😆 but I just like the book so much. I admit there are some confusing parts but the translator is always explaining thos parts.... anyways that's it..... READ THE BOOK!! <<less
5 Likes · Like Permalink | Report

Confusing. I can't grasp the story. It's probably a good story, but I literally have to read a paragraph 5 times to understand what I just read.
5 Likes · Like Permalink | Report
Advertisements
Leave a Review (Guidelines)
You must be logged in to rate and post a review. Register an account to get started.