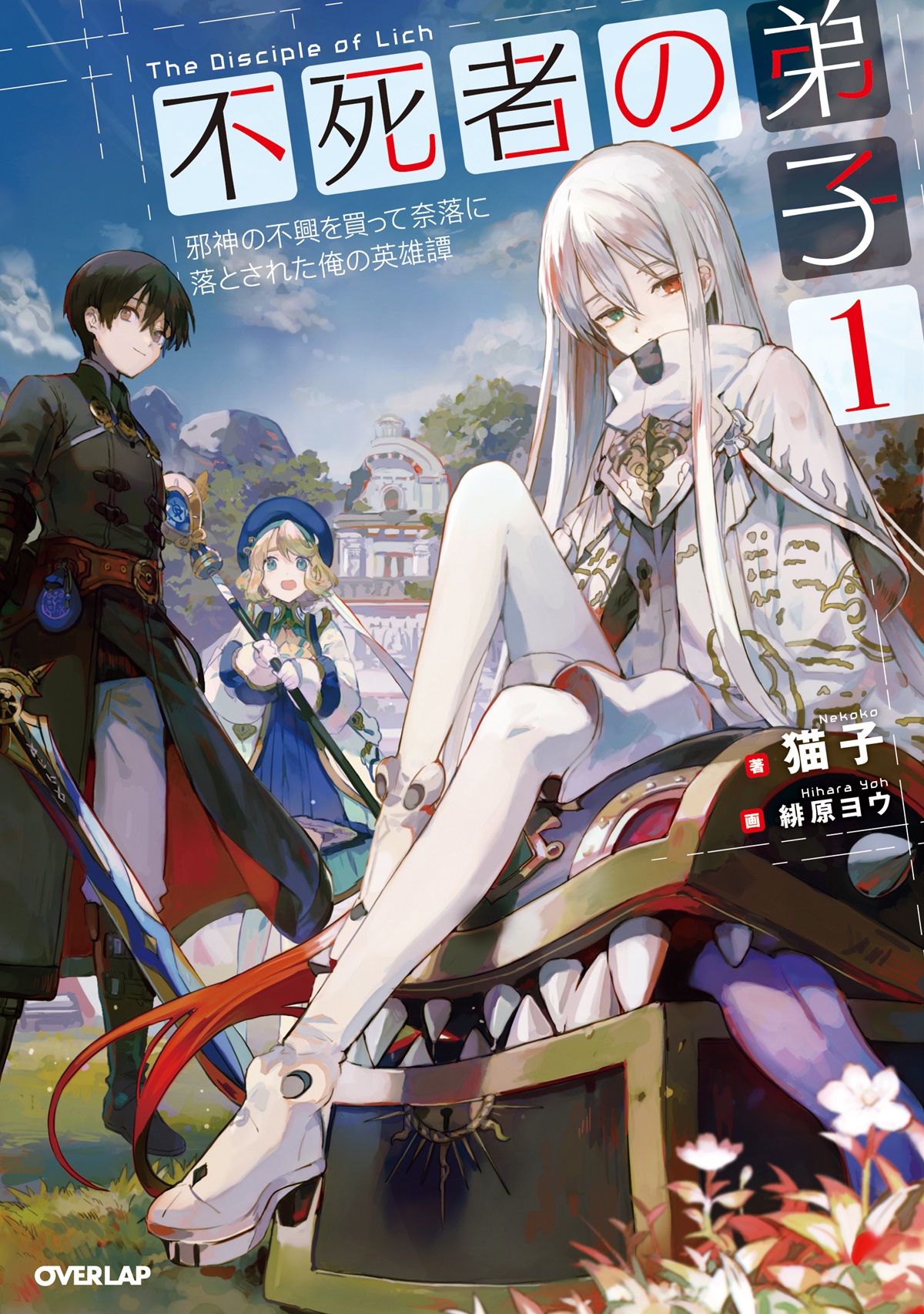 The so called 『Enjoy the Human Lives Show Humans Sent to Another World With a Cheat』was trending amongst the Gods. Kanbara Kanata, one of the chosen humans ended up incurring the Evil God’s wrath and as a result, was sent to the worst dungeon,《Cocytus》. But, in a place where he was supposed to lose his life, he met Lunaère, a self-proclaimed misanthropic immortal girl. He was saved by her, who then decided to train him ’till he could at least protect himself.

「It’s Not enough! Erm, outside of this dungeon is a dangerous place you know!」

「Seriously!? More dangerous than this place…」

This is the story of Kanata who was trained by his master, who easily succumbed to loneliness, till he became the greatest hero of legend, and yet was unaware of it.

These are recommendation lists which contains Disciple of Immortal. You should give them a visit if you're looking for similar novels to read. Alternatively, you can also create your own list.
More Lists >>>

Hmm. Kanata is likeable overall, but he's too afraid of conflict/reluctant to use his strength for my tastes. I'm sure some people won't mind, but I don't like overly servile attitudes (i.e. "even though you just insulted me/tried to rob me, I'm sorry for inconveniencing you"). ... more>>
Spoiler

The moment the MC leaves Cocytus, three people try to murder him for no reason whatsoever and he basically doesn't care. In fact, he's still worried about inconveniencing them when he gets them to show him to town. I was waiting for a smackdown and instead the opposite happens and he happily lets them go even though he even acknowledges that they're clearly bad people and he should probably hand them in.

Shortly after, when he sort of half-assedly intervenes in a half-elf girl's bullying, he still apologises to the party member who's bullying her for getting involved. It's just... what?

What am I supposed to feel when I'm reading this?

It suffers from the same 'hurrdurr he's naive and dense so he doesn't realize he's strong' bullshit. The MC is smart enough to learn magic and to figure out the b*llsh*t 'Twin Mind' skill only immortals have figured out to lean because they have so much time, but he can't even utilize HALF A BRAINCELL to figure out that his 4000+ level is greater than anyone else's level. That 'god', who, by the way, is so unoriginal and one-dimensional that even his name is stolen to make him sound even a little... more>> bit interesting, tells him that the dungeon he was sent to was the WORST. The moron passed the DEEPEST Level of the WORST DUNGEON and he still thinks he's weak? The best thing in this novel is Lunaire, despite her being a cookie-cutter tsundere character. Everyone loves tsunderes that are so obviously more dere than tsun. But that's it, the most entertaining segments is their interactions. <<less
16 Likes · Like Permalink | Report

While nothing new or groundbreaking, this series is a fun read. If you enjoy Isekai with OP characters, somewhat dense protagonists, and a bit more story than action, you may enjoy this. First of all, the translation is pretty good. No headaches trying to get around poor grammar or odd word choice. That's always a biggie to me, since there has been more than one series I've had to quit just because I'd get migraines trying to mentally translate the translation so it made sense. What really strikes me though, is the... more>> author's writing style. It's good. By that, I'm not talking about the plot or premise (though I do enjoy it), but rather that the style of writing.... the word choice, the inclusion of humor, the various perspectives.... is very well polished and gives the feel of someone who is used to writing stories rather than someone who is still a novice. This has become one of my regular follows, and I'm looking forward to each new chapter. <<less
8 Likes · Like Permalink | Report

It started out well, the MC was fixing his naive behavior and gaining strength. Then, all of the sudden, he loses all his braincells and becomes a glue eater. It became so bad that I had to stop. It genuinely ruined it for me, especially since the character interactions and writing were above average for novels like this. I don't know if it gets better, but it really fell off once he regressed back to 7 year old levels of intelligence around chapter 40. Edit: I understand that he is meant... more>> to be dense, but then don't make him somewhat competent at the start. It confuses me as to why he doesn't understand basic things for anyone in any world when he shows capability of much more than that earlier on. <<less
7 Likes · Like Permalink | Report

The story starts off reasonably enough. The MC is kidnapped from "peaceful Japan" by gods, unintentionally upsets them (because the gods are arrogant pricks), and is then sent to the "disposal dungeon" to die for their amusement. From here he is saved by a tsundere (which leads to obvious misunderstandings) and then trained to be able to survive in the world. And here is where the ok story just goes downhill quick. Tsundere forces MC to leave the dungeon and then within 2 days of doing so starts the process of... more>> chasing after him. He, who has been killing things for over a month suddenly decides that he can't kill humanoids no matter how vile/evil they are as he came from a peaceful place (oh but he can kill goblins which are humanoids because they're viewed as monsters). He straight up fails to adjust to life outside the dungeon despite having no real issue adapting to life in the dungeon. And various other cringe worthy actions from both the MC and two heroines that make no real sense. I kept reading hoping that it would get better but alas it never did. I even skimmed ahead and the one chapter that shows Miss Tsundere still has her being exceptionally dumb. The translation is well done but sadly the story itself is just... painful. <<less
4 Likes · Like Permalink | Report

it started out promising but its just another story with a pathetic excuse of a MC who has no place being a protag. I'm so sick of these stories that get marketed as light novels but are really just children's fantasy books.
3 Likes · Like Permalink | Report

I really tried to to salvage this novel, forcing myself to read the story just for the heroine and adventure but all I got was anger issues. The novel was fun to read in the early part of the first volume. The level grinding along the tsundere lich master was cute in it's own way with the talkative noble mimic. Problem started popping out when the MC left the labyrinth. Look, I know that I can't just dictate and push my opinions just to get my ideal character but oh come... more>> on! He let high level murderers get away. "I apologize" is synonymous to "Hello". He apologize to almost everyone he just met. I nearly lost it when they were bring guided to the Mythril Tower by that adventurer. He knew that they were being led just to be humiliated but goes along anyway. Being a p***y should also has a limit. I held on and continued reading just to be disappointed when he started apologizing again when he met the A-rank adventurer. He's clearly hostile to the MC and was planning on killing them but the MCs just spouting bullsh*t. <<less
3 Likes · Like Permalink | Report

I wanted to like it. I really did. But constantly he’s saying information and near in the future just forgetting it. He starts off scared. Understandable. Then grovels also understandable. Finally becomes confident and eventually courageous then cowardly until finally he just becomes full on coward. He even says he realizes that he has misconceptions but suspects every single person. Acts so ignorant. It’s infuriating. Not to mention he stutters for over 100 chapters... and it’s still never stopped. Oh wait. Yea yea it did then it came less than... more>> 10 chapters later! I could handle 3/4 of a chapter with just reading about information or long pauses in dialogue just to see a character spew a 3 word sentence. But I can’t handle contradictions at every turn. Story is interesting, and characters have the ability to be very interesting, but you’ll spend 3/4 of a chapter learning useless information instead of progressing the story. I believe it’s worth a read but by no means is it a top seller. <<less
2 Likes · Like Permalink | Report

I thought this was an enjoyable, comfy read, as far as web novels go. It remains to be seen how it will do now that we've left the dungeon (this seem to be the stumbling block for most novels, getting past the initial premise and creating a real plot). I like that ... more>>
Spoiler

It's very generic Isekai with OP MC that you can see everywhere. Well, what would like to know more? There is none to talk to. MC is dense as a rock as well. If you like this genre you will enjoy it. If you don't this kind of novel you will find it boring.
1 Likes · Like Permalink | Report

This is just another isekai story that you may have read before. The prologue and subsequent chapters do a good job of hooking you in. However, it fails to carry on that momentum forward into anything significant, effectively failing in keeping the reader interested. Couple that with cookie cutter descriptions used for world building, you get an unimpressive title overall.
1 Likes · Like Permalink | Report

The idea is nice, but the execution doesn't quite work because the MC is aware that she's a tsundere, but for some reason he still doesn't get that she wants him to stay and that everything she says and all the training she has him do is just another way of prolonging their time together. In addition, it would have been cuter if there really hadn't been a real reason for her to shut herself away in the first place, and it seems a bit strange how she's supposedly extremely... more>> powerful but apparently can't do anything about that at all. Other than the training, not much has happened so far and he still hasn't been outside the dungeon, so it remains to be seen how the plot goes on once he manages to leave. One of the strong points of novels with MCs who lose their common sense because of training like this is usually the interaction with people who do have common sense (and possibly at the same time with others who never had common sense in the first place), but since the story hasn't left the dungeon, that hasn't happened yet. <<less
1 Likes · Like Permalink | Report
Leave a Review (Guidelines)
You must be logged in to rate and post a review. Register an account to get started.