Novel Updates
RegisterLogin
Theme
Search
Your changes has been saved.
Advertisements
Descent of the Demon God 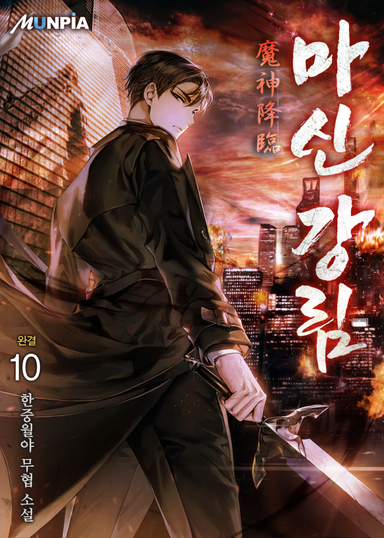 One entry per line
한중월야

Status in Country of Origin. One entry per line
233 Chapters + 11 extra chapters (Complete)

Cheon Yeo-woon, the Lord of the Sky Demon Order.

An unfortunate accident caused him to stumble into a distant future.

The GATE is open and he struggles to get back to the past from the chaotic future.

These are recommendation lists which contains Descent of the Demon God. You should give them a visit if you're looking for similar novels to read. Alternatively, you can also create your own list.
More Lists >>>

Nothing really all that spectacular, but I enjoyed it nonetheless. The MC whose strength has already reached the known peak, falling into a future world where everybody is weaker than him as he tries to find a way back home. Even as the enemies seemingly become stronger, they’re still overwhelmed while the MC only uses a bit of his power. Simply OP, facing hardly any trouble until the very last chapter. Nice read for those who like a MC who ruthlessly tramples everything underfoot. I’d recommend reading the first novel... more>> though, hard to follow this story otherwise. <<less
0 Likes · Like Permalink | Report

I just read machine translation so some details may be incorrect, To put it plainly, as the title said, it's a story of the great being descending to lesser world, so MC is really powerful, Those who dislike this theme should avoid this as I also dislike seeing people criticised the fact he is so OP, The story starts with MC who caught in space time accident ... more>>
Spoiler

and arrived at the world 1000 years from his time, the world obviously more advanced than his time but the power of martial artists has regressed for some reason, so he never has to use full power to deal with them and the technology also didn't reach the point where it's possible for time travel, there's also the gate which monsters would come out, as MC trying to get used to the foreign world, he found out that world is continuing from where he's gone missing and the sky demon order has dissolved over 20 years ago because of an unfortunate incident and the remnants of the order is fighting among themselves, making it impossible to rebuilt the order, MC then taking extreme measure to unite the people, punish his descendants based on their sins and regains the glory of the order,

between those he also found out that the descendant who gave him the nano machine gave up on returning to the future and send 3 mc's people holding the code to the location of time machine with hibernation (i teared a bit when MC got angry cause the time machine can only be used by 1 person, that means his people has to stay there), but some mysterious group is interfering with it (disturbing the hibernation), MC saw the recording of his descendant trying to make a time machine although he already take measures to send available device to MC, he unable to complete it in his time so he trying to create A.I by transfering his knowledge to a supercomputer (MC feeling bad after he saw the recording of his descendant crying in pain because he's nearing death, I cried too), but something wrong must has happened as that A.I suspected to be in the hands of that mysterious group,

As the conflict with the demon creatures from beyond the gates solved, MC informed by them that the gates opened everywhere on earth is caused by damaged planet defense core, it's caused by the long standing enemies of the demons (from what I understand about their description, with white wings and such, obviously angel clan) they intended to take over the earth but something odd as the earth is not invaded, MC decide to wipe out the enemies who causing disturbance on earth and repair the damaged planet core, while the mysterious group is up to something creepy again, what would you expect with bio-criminal company who use their advanced knowledge to clone human, make genetically enhanced human (even 1 of mc's people kidnapped in his hibernation and wake up with modified body), creating nanobomb to control and kill people etc.)

MC eventually found the truth about the mysterious group, the descendant who created A.I is betrayed by someone who helps him, that traitor made the A.I fully free from human control and they ended up killing the descendant who already suffered from illness, but the greedy traitor wanted all advanced knowledge and decide to extract it from the descendant's brain, fortunately they failed, they has a purpose to create a god using the A.I, with angel clans involvement they create a vessel for the angel's leader (maybe his body injured badly like the former demon king in their fight), the thing with combination of persona of A.I and angel's leader then show up bringing chaos to the world, it's a being of destruction, even MC has a hard time fighting it, this is a rare time when he seem humanely as he reveal his feelings that he didn't want to go to a new world, he didn't mind not getting stronger if he can return to his original place and then his ancestor (soul?) help him destroy the enemy,

MC then found the room with his descendant's brain, among the thing he used to own, there's code for MC saying 'where our relationship began', MC realise the location of the time machine and go pick it at the place he first met his descendant, founding it means the permanent separation from this world timeline and he can't bring anyone back, they have emotional goodbye, MC told them to take care of the order, half of the planet core has been repaired, the gates stopped appearing on some continent, MC told them to cooperate with the demon clan to repair the rest of it, MC returned to his time and only 3 days has passed since he goes missing although he has spent a few months on that other timeline, he already emotional from separation with the future people, when he saw his lover again and others face overlap with his people that got leave behind, he teared and hug his lover for a while

Already caught up and done with the prequel. Nano machine ended with a cliffhanger where the MC finds himself in future worldline. The story is pretty good and it feels like you are in a journey with MC witnessing his growth until he became a heavenly master. Though he is self-righteous at some point I like the consistency of his ideals and his main strength, his cleverness. If you are reading this, I congratulate you for coming this far. Let's go and read this sequel. I hope it has a... more>> happy ending with MC reuniting with his demonic clan. <<less
6 Likes · Like Permalink | Report

Overall, this novel is a sequel to nano mashin/machine which is wholly continuous from its prequel. On its own it started out on rather unsteady footing, but seems to be going in the right direction. But the future of the novel doesn't seem entirely clear, it might go well like it's prequel, or it might end up being a power scaling nightmare. Gate/hunter fiction seems to be the craze for most Korean novels these days, but this novel seems to be putting a slight (but only slight) twist on the... more>> genre, which is a little disappointing from a world building standpoint. <<less
4 Likes · Like Permalink | Report

Among the best I've read. I read the prequel nano mashing and then this one. They are of the same great quality. If you like an intelligent main character that doesn't make idiotic decisions or is swayed by strange righteousness, this is it.... more>> There is great side characters development, with full chapters about them, with their own lives and goals. The enemies are great as well, with some s*upid ones, but some really interesting ones, so interesting that we can sympathize with them. The way the mains character deals with things is really thorough too. He takes firm decisions e doesn't sway. Even parting from beloved ones, he cries, but goes without hesitation. Among the top of my list. <<less
3 Likes · Like Permalink | Report

A sequel to Nano Mashin/ Machine so if you did not read the prequel, you will be missing many of the fine details. This novel seamlessly picked up where Nano Machine left off and our MC found himself stuck in the distant future. The plot and setting were rather ordinary and I believe the prequel's were way better. There was not much tension/ excitement compared to the prequel's as the MC was ridiculously OP. Overall, a decent read but finishing it proved to be a slight struggle. Would have given... more>> it a 3.5 star were that an option. <<less
1 Likes · Like Permalink | Report

If you didn't read the prequel, you only see someone that OP from beginning and just crush all the problems with his power. You not wrong but MC did go through a lot to become strong with his cheat and the prequel made it better. MC was born and raised in demonic cult so justice and fairness while being weak are sins. He definitely anti hero that didn't stop at nothing to get the results he want wiht his powers M
1 Likes · Like Permalink | Report

A nice sequel and continuation of the story. The author took the murim influence on the world seriously and has noticable changes. That said fights/people appear out of no where and the MC never struggles. MC has no real interest in the world so the interesting parts never get explored. That said it you enjoyed the original you'll likely enjoy this new addition. ... more>>
Spoiler

Its a little funny how unnecessary the entire conflict was. Even if he got sucked into the future without a time machine, hes basically immortal. Could literally have waited for the invention before returning right on schedule.

Would of made for a less interesting story though lol