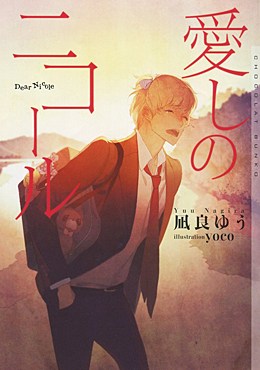 One entry per line
Nagira Yuu

One entry per line
Yoco

One entry per line
Shinchosha

Fourteen-year-old Niko is treated as a ‘disease’ for being gay in his countryside town, and decides to commit suicide. But that summer night, he is saved by the carefree attitude of Sakae, a young boy visiting from a faraway city, and starts acting as the trans character ‘Nicole’ to protect himself from bullying. A few years later, Sakae reappears before Niko as a transfer student. He treats Niko, who had reduced himself to playing the eccentric gay, with honesty and kindness, but doesn’t take Niko’s confession crammed with feelings for his fleeting first love seriously, instead making a request for romantic advice himself…

These are recommendation lists which contains Dear Nicole. You should give them a visit if you're looking for similar novels to read. Alternatively, you can also create your own list.
More Lists >>>

This is one of my favorite novels on the site. I've been checking for updates periodically since July, but have been too lazy to post a review (as I rarely post reviews). So far, it's a sad and bittersweet story. Rather than a "light novel, " it's tone is closer to a regular novel with serious tones and content. The first chapter is a coming of age story in itself, touching upon harsh realities faced by individuals identifying as LGBTQ in regards to ... more>>
Spoiler

the main character facing severe bullying after his classmates discover his orientation. I think that it has a certain "realness" to it, despite the peculiarity of the Main character acting out an okama archetype persona as a form of self-protection, when he is only gay, not trans. I wonder if that act of self-preservation may have offended people or the fact it's not standard Boys Love may have lead people to rate it low (esp. As the love is not mutual at this point). The first chapter is very long and covers the entire childhood through high school graduation arc. And for those of you who don't like the fact that the main character acts out his "Nicole" persona, don't worry, it looks like we have seen the last of it at the end of the chapter. I'm really curious what his adult life is like in Tokyo and whether/how he can get over his childhood crush. The whole relationship is just so painful, and you really feel for Niko & wish a happy ending for him--though I'm hoping he ends up with someone else/new.

[collapse]
Anyway, I have high hopes for this series and just want to yell "Ganbatte" to Niko-san and translator-san. I think just the way the Main character keeps persevering despite everything, and the feeling of 'realness' to makes it a real hidden gem, that I wish received more notice. If anyone knows more of what's going to happen next, please spoil me ;). <<less
8 Likes · Like Permalink | Report

Just to be clear, Niko pretends to be trans, since trans people seem to be accepted better than homosexuals in his area (don't ask me how that works, I don't know). It's mainly about how a gay dude struggles in a rural area, and what he has to deal with, as he pretends to be trans, and gets called a Drag Queen a few times. It's bittersweet, not really a Happy End, but, for the most part, it's a Good End. 10/10, would recommend.
5 Likes · Like Permalink | Report

It's a solid story and the author does an excellent job of voicing the Niko's thoughts without falling into s*upid cliches regarding mean side characters. Instead the people are portrayed lightly?? Not sure they're just normal people. My sentiments are similar to Potion before me. I could say a lot of stuff but it's too much bother. The quality of writing (based on the first chapter) is like utsukushii no koto. I don't often buy things but I am on the look out for this in kindle form. Too bad... more>> Amazon won't sell it to me because of copyright restrictions. Edit: So I found a physical copy and bought it. Now to slowly go through it with my incredibly bad and barely usable Japanese. <<less
3 Likes · Like Permalink | Report
Advertisements
Leave a Review (Guidelines)
You must be logged in to rate and post a review. Register an account to get started.