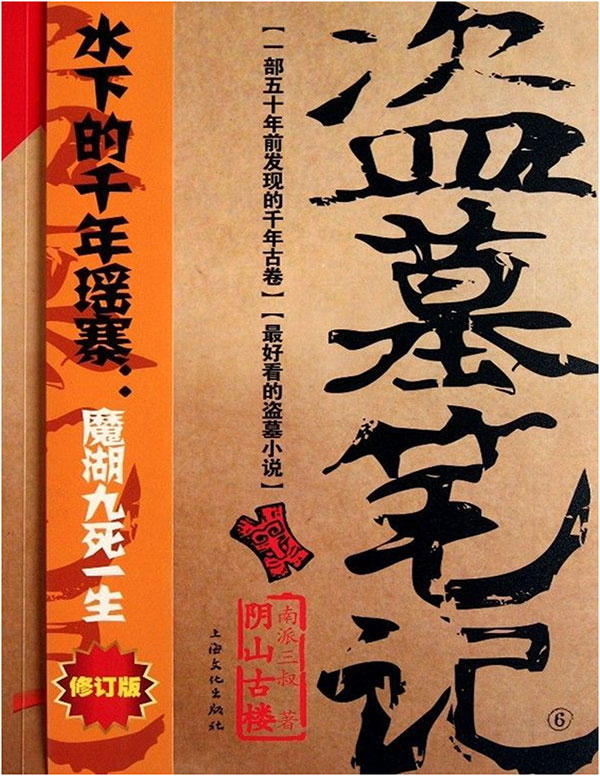 Status in Country of Origin. One entry per line
10 Volumes / 527 Chapters (Completed)

One entry per line
ThingsAsian Press

A novel series about the grave-robbing adventures of Wu Xie, a young man hailing from a family that had been tomb-raiders for centuries.

These are recommendation lists which contains Daomu Biji. You should give them a visit if you're looking for similar novels to read. Alternatively, you can also create your own list.
More Lists >>>

Thank you SO much for picking this up TAT I doubt we will ever see the rest officially translated. This novel is so amazing I've been waiting for yeeears~~~ even though people have some issues with the author, I still want to read a great and exciting story!
12 Likes · Like Permalink | Report

Yes! Thank you for taking on this work translator! Been looking forward to someone translating the work since the dramas. For those that don't know, there are several (not only based on the main story, but also the sequels, side stories, and even the reboot (set ten years after the last adventure.... can definitely recommend the two seasons of Reunion: The Sound of Providence but beware of spoilers). Daomu Biji is an iconic series of novels famous amongst an entire generation and spanned across many years of work from Xu Lei (aka... more>> the evil third uncle who loves to dig holes without filling them... even to this day). Each adventure is different but fills you with a rollercoaster of feelings. I've laughed, cried, and scared myself in the dark as I succumbed to binging several volumes of books after going through the dramas out of order until I forgot my own name. Prepare your heart as you love each of the characters. No BL, but the Daomu Biji has one of the strongest cult following of shipping between Wu Xie and his Men You Ping. No lacking in Chinese fanfiction out there btw. For me, it's shipping the brotherhood of them :) <<less
10 Likes · Like Permalink | Report

Very good translations!! I wont spoil the content of the books, but the translation and the story both are very good. Thank you for the hard work!!
3 Likes · Like Permalink | Report

Hi. Iʼm back. Heh, those who read my review of ORV will know me. I write painfully long reviews. You wouldnʼt want to read mine. Letʼs see, this is hard to evaluate. Overall there are too much plot-holes, pits the author didnʼt finish, and some unnecessary long information. In certain chapters, you canʼt even understand what the author is trying to convey. I said that in my opinion. Still, you might wonder why the hell I gave a 5 star review anyway. Because I like nonsense and this one just happens to be... more>> one. Basically you follow our MC, Wu Xie, the innocent-turned-black. He actually got into the grave robbery business because he wanted to survive from poverty. Yep, you read that right. Add in curiosity, circumstances, and thatʼs the golden recipe. With some painfully long (useless and yet not) build-up. You have now acquired a calm-yet-not protagonist. Letʼs see... Our main series consists of eight books. The MC grows, yes. Heh, into a maniacal bastard eventually. You follow it, youʼll know why. For some interesting fact, the first book was actually a fan-fiction. Hey, how ironic and cool is that! ... That was vomited into a series. Congratulations for the birth of a really long and full of agony journey. Like every other... This series is not suitable for everyone but if you like all the things mentioned above, then youʼre definitely welcomed into the abyss. By the way, this series mainly has Wu Xie as the narrator. Read that as in his POV. Yes, the eight main books are written from his viewpoint, including a lot other but not all. So if you think that first POVʼs are not your taste... yeah.
Spoiler

1. Wu Xie the MC. Nicknames: Tianzhen Wu Xie. Naïve. Boss Wu. Guan Gen. Your average one, basically his ability is to think of things and suffer. Ah, that was too forward, was it. Childhood friends with Xiao Hua and Huo Xiuxiu. *sighs*

(When you follow a story too long that you have nothing to brag about anymore because youʼre too tired...)

Anyway, yeah. He might do s*upid things at some point but weʼre all humans arenʼt we. Yeah, I should go to the next one...

2. Zhang Qiling. Little Big Brother. Xiao-ge. The Zhang Familyʼs Patriarch. A-Kun. Mute Zhang. He has quite a lot of nicknames and his real name is still unknown. Unbelievable, I know. But thatʼs the truth. His background is too big and complicated and unbelievable, his existence, yes.

His background leads a few of the books such as the seventh and eighth one if Iʼm correct. And most importantly Tibetan Sea Flower, yes. Quite the important ones you see...

3. Wang Pangzi. Fatty. Our third and the favorite one. Heʼs that one friend that doesnʼt have anything to do with anything in this messy and complicated world. He just loves treasures and is apparently too kind and realistic. Basically the support. If Wu Xieʼs the brain/strategist, Xiao-ge is the blade/heart, then Pangzi is the pillar/defense.

He is really what makes the series a whole lot bearable to read. An all-rounder, the end.

They have an unofficial group called the Iron Triangle.

4. Xie Yuchen. Xie Yuhua. Xiao Hua. The Head of Xie Family. Heʼs an opera singer. You can say heʼs the most cautious character in Daomu Biji. Handsome, rich, calm, lofty. Your typical CEO. Donʼt mess with him or you suffer. Childhood friends with Huo Xiuxiu and Wu Xie.

5. Hei Xiazi. Hei Yanjing. Black Glasses. Blind. Can be ruthless to others if he wants to. Is a dangerous character if one think of him a second time. Humorous and dangerous. Might be blind but can snap your neck in a blink.

6. Huo Xiuxiu. Ah, our one and only female character that soars to the sky. Again, donʼt mess with anyone in these six people. There might be a few more female characters but she strikes the most. Childhood friends with Wu Xie and Xiao Hua.

We have a lot more but now Iʼm currently too lazy to comment about them. Can you believe that? Hell yeah.

[collapse]
I can write a lot more than this but no one would read it then except me. Overall, itʼs a long journey so donʼt pick it if you think that youʼll dislike such a story. Or just pick it but donʼt regret it. We have a lot of materials. The main series. Sequels. Extras and tidbits. Adaptations. Dramas, manhuas, even a donghua. Fan-fictions. Lol. Youʼre welcomed to join if you want. <<less
1 Likes · Like Permalink | Report
Advertisements
Leave a Review (Guidelines)
You must be logged in to rate and post a review. Register an account to get started.

F Ranked: World Domination with the...

Fighting to be Kind in a...
Advertisements