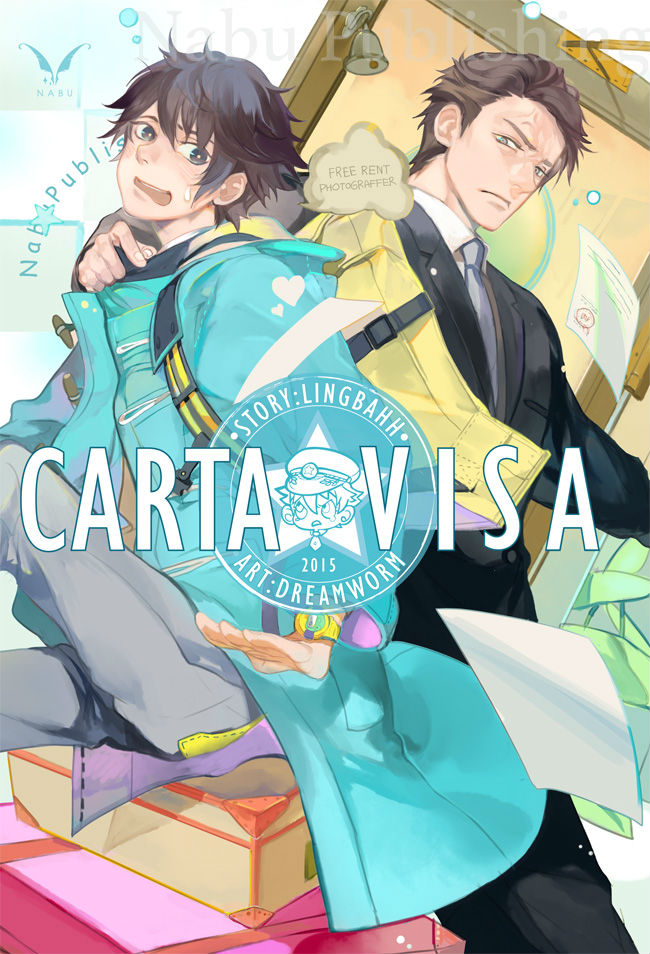 One entry per line
Lingbahh

One entry per line
Dreamworm

Status in Country of Origin. One entry per line
5 Volumes (Completed)

This story is about the chaotic life of a fashion photographer like me, who one day had the bright idea to set out for a certain ‘iron curtain’ country as a means of gaining new and peculiar life experiences. However, God decided to grace me with an enemy unmatched in good looks and ferociousness, Alexey, a mafia gangster in disguise as a civil servant. Not to mention, he’s not by himself. Accompanied by three particularly brutal bodyguards, the mundane life of a commoner like me was flipped upside-down by an expensive and fatal life lesson that I never dreamed of facing.

These are recommendation lists which contains Carta Visa. You should give them a visit if you're looking for similar novels to read. Alternatively, you can also create your own list.
More Lists >>>

First thing first. Oh my god, I've never thought that I would see it translated! I'm a fan of this author and had read all the series since it was still on the website. (I actually bought every books and the bag keychain at the book fair.) Now, before I getting of the topic more than this, I want to recommend this story to anyone who loves a cute, silly, and good-natured uke; pairing with a cool, genius, seemingly cold but actually kind seme. The MC (Petch) may seem to be... more>> just a typical hot-head and speak before thinking guy that you can find in a manga. But he is also a hard-working person and always wants to improve himself. During the progress of the story, you will find that there are many things you cannot judge at its first appearance. There are no coincidence about the event that's happening. And when you finally connected the dots, you will see how deep the relationships between the characters (not only the main couple) are; the devotion of the character (s) for the person important to them and how far will they go to achieve it. There are lots of steamy stuffs, of course. Hahaha. Just give it a try. Really. I don't know if the translator will translate the other books or not, but I wish they will. Because it will give you more understanding of other characters in the series and how they relate the main story. <<less
8 Likes · Like Permalink | Report

It... doesn't look too bad.... of course it's only been the first chapter but the plot sounds like it might be interesting. For once, it's set in a country that doesn't use the mc's first language so we get to see him struggling with the english. Not much to go on yet but I don't think this deserves a 1 start while it hasn't even picked up yet. So, for now I'll set my vote as 5 to even the scales.
1 Likes · Like Permalink | Report

Honestly, I want to give this a 2, just because I don't understand a lot of it, don't like Alexei one bit, and kind of look down on Petch. The two totally deserve each other. I'm only rating this high because there were funny moments and some cute moments, and I don't want to discourage anyone from reading, but I was irritated. ... more>>
Spoiler

So, Alex works at the embassy, and is also a mafia (?) for some reason when he leaves the country, he leaves Petch with a guy that pointed a gun at him when he tried to punch Alex out (because this guy said something to irritate him). Also, for some reason, this guy is being possessive of him, and Petch isn't trying all that hard to get away, as much as he keeps saying he would. I got to where Petch decides he has 'feelings' and I still didn't understand this story. Honestly, it read like one of those yaoi mangas you read for the smut and not the plot, but if I'm reading multichapter novels, I at least expect some plot that will make sense. I wouldn't call this non-con, but dub con because their first time, Petch is drunk, and this is 2 days after they meet. And every time, he's not given the chance to say yes or no, he just goes along with it. (If someone could give some spoilers in the forum, I would thank you greatly to have a summary so I wouldn't have to read this. I just want to know how it ends.)

Also, while I don't mind possessive MLs, this is just ridiculous. This guy takes it to such a degree that I wonder what Petch has seen in his life that he didn't run away. Guns were held to his head at least three times and he saw someone get murdered and helped cover for it.

They're all lovey dovey in volume 2, and I just don't get it. The cute moments are nice, but not to make up for Alexei being an a**hole.

[collapse]
If you read this, read this for the smut. A lot of the actions by the characters doesn't have the same logic normal people would. I don't know if I should say it gets better, I just didn't want to continue reading more of volume 2, so I'm putting this on hold for now. I know I'll probably meet a lot worse and come back thinking Alexei is a kitten. <<less
0 Likes · Like Permalink | Report
Leave a Review (Guidelines)
You must be logged in to rate and post a review. Register an account to get started.