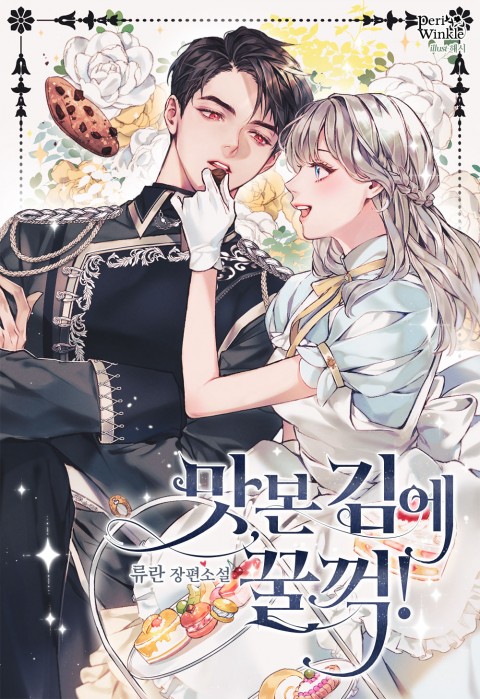 One entry per line
류란

Status in Country of Origin. One entry per line
97 Chapters + 13 Side Stories (Complete)

“Are you eating in this situation?”

“Of course! I’ll have to keep savoring the taste until I die. Do you want one?”

She was reincarnated in a novel as Luana, the abandoned princess.

And her death was already decided.

She just wanted to let people know about her cooking talent,

but she was misunderstood as a witch because of her cheese jerkies!

The general of the conquering army, Duke Legion, who had lost his sense of taste, took her to the empire for her extraordinary jerkies and to break the curse that had come down from generation to generation.

“Prepare the same for the dinner.”

But now, she also wanted to look after Legion.

‘Eat three meals a day, and make sure to make dessert. I’m sure he will be able to gain some weight….!’

The Duke took the jerky from the princess. On the surface, it was no different from any beef jerky.

But when he took a bite of it, it felt like a new world had opened up.

The jerky, made by the princess, felt more tender than the others as he gently crushed it with his teeth.

The taste of condensed meat smudged his tongue as he chewed on. It was just as she said.

He could feel the savory taste of the spicy meat, and at the end of the day, he wanted to have more.

The desire that he had, faded for a while.

“I didn’t really want anything, but now I think I do.”

These are recommendation lists which contains Bon Appétit. You should give them a visit if you're looking for similar novels to read. Alternatively, you can also create your own list.
More Lists >>>

So far it's so funny and cute. It makes you wanna read more and more.
waiting for more T_T
3 Likes · Like Permalink | Report

[collapse]
ML is a cold hearted Duke who lost his sense of taste (thinking about this as a foodie hurts 🥲 there’s no point in living if you can’t eat good food). So far it seems like he’s your typical ML but he might warm up later on. The translation is really good! All in all, it’s an enjoyable read 💕 <<less
2 Likes · Like Permalink | Report
Advertisements
Leave a Review (Guidelines)
You must be logged in to rate and post a review. Register an account to get started.

I Was Summoned To Have Tea...