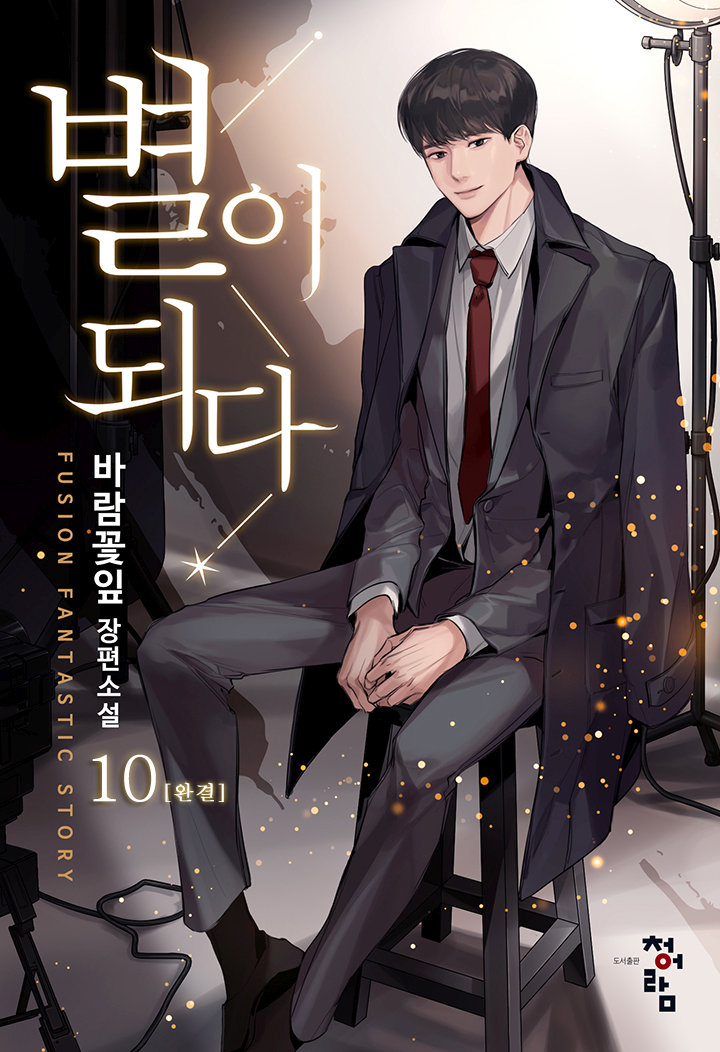 One entry per line
바람꽃잎

Status in Country of Origin. One entry per line
244 Chapters (Completed)

One entry per line
Chungeoram

What if you woke up one morning and remembered all 999 of your past lives?

Chae Woojin, an actor who will shine brighter than the stars. A story about his journey towards his dreams!

One entry per line
별이 되다

These are recommendation lists which contains Become a Star. You should give them a visit if you're looking for similar novels to read. Alternatively, you can also create your own list.
More Lists >>>

Overall a great slice-of-life showbiz novel that actually focuses on the "getting famous through acting" plot point. It's fairly slow and mellow, but the translation is well-done and the pay-off of seeing the MC, Chae Woojin, being recognized for his skills is pretty nice. But there's one fatal flaw that's starting to nag at me as I read this: the MC is too perfect. Nearly every other sentence is about how handsome is or how nice he is or how intelligent he is. At some point, it starts to get excessive. What... more>> minor flaws the author manages to squeeze out are non-issues. They're like the kind of things you say in a job interview when you're asked what you're bad at. Something like, "Oh, I'm too much of a perfectionist~"
Spoiler

At 50-something chapters in the most recent issue the MC has faced is that he completed a dangerous stunt perfectly without notifying the staff thereby worrying them. And then he gets all sad, thinking he doesn't care enough about the people around him and that he'll regress into his cold past-life self.

Yes, that's right. Did I mention the MC has memories of 999 previous lives? And that in every single one he was supposedly a cold, narcissistic bastard? Well, if I forgot about that, don't worry. Because sometimes it seems like the author forgets too. It basically never appears in the plot in any meaningful way except as a clutch for the MC to be good at unfamiliar roles. Or to make the MC seem like he has flaws, like "Oh, I may be perfect now, but I was terrible in the past you won't ever know about!"

His past lives aren't really the issue, though. The MC almost always tries to act on his own skill, feeling deeply ashamed whenever he has to use his former life experiences. The issue is that even when he acts on his own skill, the MC can do everything basically perfectly.

[collapse]
Even the MC's fanbase is unproblematic! He even gets along with his sister (yes, he's praised for this in the novel) ! I guess this "MC is too perfect" thing isn't too big of a deal if you're reading this as just a slice-of-life. But go in with the expectation of substantial character development or drama, and I think you may be disappointed. Still, it is rare for there to be a showbiz novel that is actually career-focused, so I'll give this one a 4-star rating. <<less
0 Likes · Like Permalink | Report

Great novel, it has believable take on the entertainment industry. While the MC, might seems op, they way they tell the story is good enough that people would get sucked in into the story. While it is slow, it's written well overall and my favourite would be the relationship of the MC with those around him.
1 Likes · Like Permalink | Report

Actually Good, it's been a long time since I got interested in a novel. Such a shame other people review it already at such an early phase. Nevertheless it's actually an interesting read, I really needed a break from those braindead fantasy novels and Edgelord MCs.
8 Likes · Like Permalink | Report

A lot of potential, Chae Woojin’s character is pretty good and the writing overall is nice enough for me to expect a lot from this novel.
6 Likes · Like Permalink | Report

Really really like this novel. The shooting scenes are exciting, believable (I can really imagine them happen irl), and detail. Hopefully new readers won't get discouraged by the low rating, because for me the novel deserves 5 stars.
4 Likes · Like Permalink | Report

I'm glad I decided to read this anyways after reading some of the reviews. I genuinely love this book so far. I haven't read the whole novel so maybe things change later on but so far the MC isn't as OP as reviewed. He does rely on his past lives a few times but he quickly realized he doesn't just want to play another life, he wants to act. (The novel explains this better lol) I like how the author delves into the nuances of the entertainment industry and how his... more>> fanclub works (his fans are so cute and sincere but also hidden devils). The author also describes the acting scenes really well and it's not just he played this role and done. The acted scenes are so interesting that I'd love to read those stories too, it's like mini stories within the novel. I appreciate all the effort the author put into making the characters so interesting and developing every single part of his acting career. Glad wuxiaworld took this story up, they usually don't drop midtranslation. <<less
4 Likes · Like Permalink | Report

I'm only 30+ chapters in, but so far I see a story with great potential, and somewhat inconsistent execution. Hopefully it will keep getting better! The Good: The BAD: The different: So far, the good bits are good and appreciated, the bad bits aren't that bad- so tolerable. Don't know if this can meet it's potential, but the writing isn't bad, so I'd say it's worth a look.
4 Likes · Like Permalink | Report

The novel reads like jumpstarting a car The story keeps stuttering to the next draw without any investment. The intro arc has ended at ch7 and we've already skimmed 4 reasons I should care about the MC. (Angel punishment, single mom, lover heartbreak, previous life resentment). But the 3 lines each point gets cant convince me to root for him. The movie scenes were decently and the dialogue seems good. I could picture it in my head even if we got 0 description of the plot of the movie. I turned off... more>> the ignition before it got going. Could of gotten better. <<less
2 Likes · Like Permalink | Report

If "life once again" is the more grounded story that put a lot of highlights in soliloquy/internal struggle of the characters; "become a star" is ultimately a fun story that is easier to digest with overall likeable cast. We all know MC is stacked as hell and has cheat like abilities just from the description, but I like that it doesn't really define him either
1 Likes · Like Permalink | Report

Pure wish fulfillment. The only acceptable aspect is the intrinsic details, as the author has an excellent degree of storytelling at times, specifically towards his past lives. Rather than ruminate on the boring, you can expect a lot of magic. This, however, does not really excuse the constant appraise of the main character. At times, it is just too much. It's a good read for one sitting.
1 Likes · Like Permalink | Report

The author makes a source of conflict in the form of blackmail from the former company. Yet, the protagonist already preemptively solve those. The other actor whom he replaced is straight up depicted as bad in acting as well as inferior in looks, that the director just choose to use the protagonist.

[collapse]
If anything, the author does too much telling instead of showing. <<less
1 Likes · Like Permalink | Report
Advertisements
Leave a Review (Guidelines)
You must be logged in to rate and post a review. Register an account to get started.

Lord of the Ancient (古代の主)