Novel Updates
RegisterLogin
Theme
Search
Your changes has been saved.
Advertisements
Beast of the Frozen Night 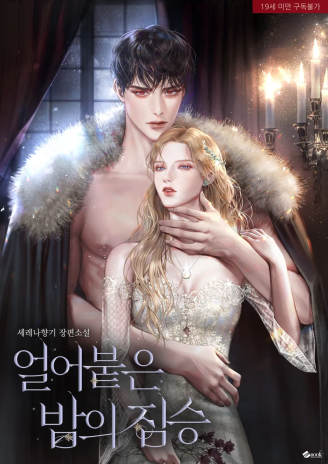 One entry per line
Tenbook Publishing

County Libelois suffered an astronomical compensation due to the successor’s mistake.

On behalf of the older brother who could not pay the compensation, Anne leaves for the North as she was pushed by her family and becomes the Grand Duchess.

But the Grand Duke Daymond Cromund, whom she met there, was not as old as the rumors suggested, and was somewhat secretive…

“If I give birth to an heir, please let me leave.”

“So arrogant. If you want a child, you would have to take my seed every day.”

For a moment, Anne almost screamed, reassured by the Grand Duke’s appearance, who willingly accepted her proposal.

Every time he held her, his face was filled with anger.

Daymond held her sadistically as the nights went by.

Anne was confused by the sight of the Grand Duke, who was constantly holding her while enduring his anger.

Did she spit out a forbidden word?

Obligation of an Arranged Marriage (3)
Red Labyrinth (2)
Feelings in a Dream (2)
You, My Devil (2)
The Countess Is Afraid of the Night (1)
One Hundred Years As An Extra (1)

These are recommendation lists which contains Beast of the Frozen Night. You should give them a visit if you're looking for similar novels to read. Alternatively, you can also create your own list.
More Lists >>>

Currently, the ML is a boorish, overly-controlling AH, who is obsessed with people not touching things which are "his". He is also a wife rapist. There's no way around it. He is brutal and unpleasant in the bedroom to "punish" our MC for something he never fully explains she's guilty of (most likely not giving him the worship he feels he deserves. Or from her proposing that she have a child she is willing to abandon with him in order to be free of both him and her garbage family. Rather than... more>> realizing she said this out of uncertainty, misunderstanding, and fear, and trying to make her feel welcome, loved, and safe, he chooses to be a raping, horrible, a-hole for not giving him the answer he wanted).
Spoiler

Can I just rant a moment at how sick I am of the "you're wet, so you must like it" shaming? That is a physiological response intended to prevent a woman from sustaining physical damage. Her producing lubrication is so you don't cause rips and tears with your violent fumbling. She is not turned on, her body has taken over and rebooted in self preservation mode, STOP using that as permission to excuse you being r*pey.

[collapse]
I currently cannot tell if he is some sort of supernatural creature, such as werewolf. The cloak of broody angst and mystery is thick with this one. I strongly suspect he has been stalking her and set her brother up, but this is not confirmed. The prologue chapter suggests that at some point, she will get amnesia, and, oblivious to his horrible prior treatment, they become lovey dovey... until she remembers he's a r*per creep and then he gets to suffer. I am living for this man suffering, so I hope it happens soon. If he suffers enough to satisfy, I will raise my rating. However, the raping is pretty brutal, and one "round" goes on for chapters and chapters. If that portion of the story goes on much longer, I don't think many readers would be willing to last through it to get to the hoped-for vengeance bit. Read if control, possession, and legit, graphic, non-con is your kink. Avoid if you want to see healthy relationships. <<less
3 Likes · Like Permalink | Report
Leave a Review (Guidelines)
You must be logged in to rate and post a review. Register an account to get started.