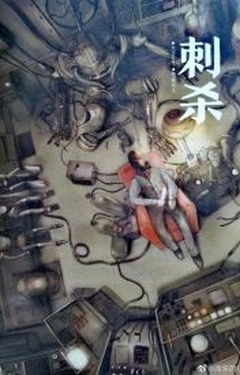 Status in Country of Origin. One entry per line
8 Chapters (complete)

Assassinate is a short story written by Priest, part of Machine Fantasy – A Dream of Steampunk (机械幻想 – 蒸汽朋克之梦), a steampunk anthology published in 2015.

Set in a fictional London, at the beginning of the Industrial Revolution, Edward Lander’s name was both renowned and hated by the empire, which needed his groundbreaking intelligence, and by the anti-science organizations who detested such unnatural progress. While the empire expended its effort in protecting him and the anti-science organizations set assassins after him, Edward Lander only wished for his unspeakable feelings to reach the object of his affection.

One entry per line
刺杀

These are recommendation lists which contains Assassinate. You should give them a visit if you're looking for similar novels to read. Alternatively, you can also create your own list.
More Lists >>>

Like many of Priest's stories, the characters are quite complex (yes, somehow even in an 8 chapter short story, there's an angsty relationship). The story basically ponders on the wealth of intelligence that is directed towards military and destruction rather than towards creation. It seems wars somehow manage to elicit endless spending and technological innovation, which only get directed back towards everyday life after the needs of war are met. And even when technologies are introduced, they usually have a human cost in terms of lost jobs or accidental deaths. I love... more>> how in this story, two men caught in the web of conflict manage to break away from this paradigm and start over, turning previously oppressive technology towards something entertaining and positive. <<less
8 Likes · Like Permalink | Report

As expected of Priest, a really good short story that's unexpectedly moving. I honestly didn't expect to feel so many emotions reading a story that's only 8 chapters but here we are! The short length doesn't stop Priest from giving dimension and depth to both the plot and the characters. The setting is very unique and sets up a really interesting conflict of science vs. Anti-science protesters, something I think parallels some of what's happening in the world today. Trapped in this conflict are our two main characters, Edward Lander... more>> and Arno Hall. If you're looking for a quick read for some romance and light storytelling, this is not it. I definitely had to turn on my brain for this, and it's hard to say if there's really any romance in this. Would I recommend this story though? Absolutely! The writing is very beautiful and poetic with so many quotable lines. The translation does Priest's writing justice, as the translation into English is still so lyrical and flows so well. The reveals and twists as you read on give extra oomph as they're quietly layed out. There's so many layers packed into 8 chapters, and it's quite philosophical at times. The themes and messages never feel preachy, however, and once you finish you'll want to reread to notice all the hints and clues you missed the first time around. Edward is a really compelling main character, as cold and arrogant as he is to the world is how passionate and gentle he is to his secret love. You can't help but empathize with him. He is the complete opposite of relatable and down-to-earth, but when he's nervously changing outfits and waiting for Arno to show up it tugs on your heart to see him so vulnerable. The fact that he's mute and has to use writing to communicate adds to the situation's tragedy. All the things he wants to say, all the thoughts he's shouting inside will never be heard.
Spoiler

You can see why Edward grows to hate the world, given what happened to his family. The amount of hate given to science and scientists is enough to get his entire family mercilessly killed by assassins. On that cold Christmas night none of his neighbors were willing to help, only a poor woman and her son passing by were willing to extend a hand. Her son was of course Arno. I think this shows kindness can come from the most unexpected places and people, and you don't have to have much to give some. In the end, however, Mrs. Walson's kindness got her killed when she was trying to make Edward more comfortable. This was heartbreaking to read, especially the nature of her death. From that moment, Arno and Edward were destined to be on opposite sides.

Arno might've had every reason to act cold and hateful towards Edward, but it still breaks your heart seeing Edward's quiet acceptance of it. I can't quite figure it out, so I wonder if Edward had the Difference Engine in him all along, or if it got implanted after he was taken away?

All in all, by the end I just really wanted to give each of them a hug, although I'm pretty sure I would end up dead either way >_<
[collapse]

Hopefully this review does this story some justice as I simply don't have the brain capacity to analyze all the themes, characters, motivations, etc. All I can say is please give this story a chance! Thank you Priest for another wonderful story! Your writing abilities never fail to amaze!! Thank you so much NorthwestFlower for another Priest translation!! Your translations are some of the best I've read! *Air hug ⊂ (´• ω •`⊂) <<less
6 Likes · Like Permalink | Report

See, this is what I hate with Priest's writing. The angst always hurts me more than the love could heal. Stab me 10 times, heal me 9 times. And yet, I'm compelled to give it 5 stars because the writing is just. So. Good. Even if you consider the amount of poetry that get lost in translation, the writing is still so good. Here we have a MC whose intellectualism is devoid of humanity (innate + his past) and a ML who obviously hates what MC stands for but still could not... more>> completely let go of MC (his feelings aren't explicitly written unlike MC's but you can tell from context). And there's just. So much angst generated from these two hostile worlds coming together. It's HE but I wish there was more at the end that could help pad the pain from the rest of the story. I'm not satisfied at all with the flowers in the ending. (੭ु ‾᷄ᗣ‾᷅) ੭ु⁾⁾ <<less
5 Likes · Like Permalink | Report

I always have high expectations on Priest's works, but I didn't thought that an 8 chapters story could bring me so many emotions. I laughed in the beginning with Lander's (MC) way of thinking, you can clearly feel his hatred and loathing for the world, he doesn't care about almost anything - except for Arno - and it is awesome to know at the end that he changed in a good way. The angst was heavy for me, I cried a lot; though there are only 8 chapters and they... more>> are so small, it still can make you fell hopeless in the middle of the story, I went crazy in chapter 6 I thought it was over, but then chapter 7 gave me a sugar spoon and I was overjoyed. It is an amazing tale, I highly recommend to everyone who wants something small, but not simple (it's a complex story) with good characters and an outstanding plot (after all we're talking about Priest). <<less
2 Likes · Like Permalink | Report
Advertisements
Leave a Review (Guidelines)
You must be logged in to rate and post a review. Register an account to get started.