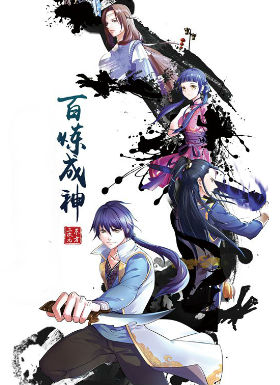 One entry per line
Gift Of Liberation
恩赐解脱

One entry per line
Ranzai studio

Status in Country of Origin. One entry per line
3594 Chapters (Ongoing)

Luo Zheng is at the bottom of the Luo Clan hierarchy, despite his family being the founders of a power refining technique that could instantly defeat any opponent.

One night, enraged by unfair treatment from a family steward, Luo Zheng burns the family records. In doing so, the hidden magic in the book engulfs him and Luo Zheng becomes a new skilled fighter. Fleeing his home and despicable clan, Luo Zheng must learn to harness his powers to rescue his younger sister while his own cousins are on his pursuit.

How to Live as the Enemy Prince (1)
The Rebirth of the Malicious Empress of Military Lineage (1)
Unprecedented Pill Refiner: Entitled Ninth Young Lady (1)
You’ve Got The Wrong House, Villain (1)

These are recommendation lists which contains Apotheosis – Ascension to Godhood. You should give them a visit if you're looking for similar novels to read. Alternatively, you can also create your own list.
More Lists >>>

I have read this novel's Manhua and if the story is the same as the plot in the manhua then I have to say that this novel is trash. If you have read Martial World then you essentially know the whole plot to the series except you will have to sit through and read the same story of Martial World yet with a much more retarded MC, retarded side characters whose only job is to make the MC look better and "cheer him on" and bad story elements in general. Story As... more>> I said the story is the exact same as Martial World except that the author added his own (retarded) ideas to make it "better". For example, in the arc where the MC has to leave his home continent to go to a continent on the other side of his planet (seems familiar?), he has to go the Tower of Sin to get the inheritance of an immortal yet when he goes through a series of tests to get the recognition of the Tower's spirit, he defeats the previous master's clone and is able to remove anyone he hates from the tower. Yet he immediately get into a fight with the demons and has to have the Demon Nights (Elves) to save him because his sword spirit is a Elf King instead of just removing all strong demons from the tower and allowing the humans and elves to gain the resources inside. I also don't understand why the author had to make it so that his sister is trapped and he was a slave even though it provided no use to the story except for a "too strong for MC villain that he kills later". Something I also hate is tat the author made his sister his "Fate's guide" so his sister constantly gets captured and he has to save her which is f****** stupid. I mean if he wanted to have a way to make the MC want to go to the higher realms he could have just made him obsessed with the "Dao" at least it isn't as lazy and annoying as having to save his sister multiple times. Cultivation The cultivation is divided into Essence, Body and Soul (Similar to Martial World) and he discovers and practices all three of them at the exact times that Lin Ming did in his story. The Cultivation Stages for the Essence is your typical cultivation stages but the Body and Soul Cultivation are the same as Martial World that the Body Cultivation stages are the exact same as Martial World that even the final stages use Star energy to cultivate. Romance The romance in this novel is about the same as all the other Chinese novels which is basically none. The female characters fall for him because he saves them. That's it (I cant say Martial World did it better because the romance in there was also nonexistent). The only positive I can think of is that he only married three women (Which I still think is too much as only 1 women would have been since one of his wives literally isn't mentioned for half of the f****** story. Conclusion I simply don like it. I know I compared it a lot to Martial World and I know Martial World isn't the pinnacle of Chinese cultivation stories but that's what this is a sh**** clone of Martial World. <<less
5 Likes · Like Permalink | Report

I hope someone continue this novel pls. I'm having a headache while mtl it. I read the manhua and still waiting for new update. At the first part of the story is boring coz' it has so many words and explanation related in cultivation. However when the MC is in the sect, the progress of the story is getting better. This is not like the other novel when the MC is in love to FL. Instead it's about her sister, the 9 dragons and his mysterious destiny. One of the reason... more>> I like this is because even if there are women have feelings for him. He only just focus to become strong so he can save his sister and he knows that he owes the dragons so he decided that in the future he will help them. Yes, I like his personality. I don't know why there's a r*pe tag here in the novel. I'm in chapter 811 and still have no r*pe scene that's why my opinion to MC personality is still good. also, he's op but not like the other op character who always win. He still loss and learn from that to become strong and lastly, I'm curious how he will change and dominate the world. guys! I really recommend this novel but I recommend first is to read the manhua. This is a gem! <<less
5 Likes · Like Permalink | Report

Mediocre is the best review I can give this novel. It extremely predictable and the author has created a mess of a plot that becomes more and more boring as the story progresses. If you want an example of crappy writing then this author is the one you want to read. ****If you want an example of crappy story telling just read below**** At one point in the story the a character is born in the MC's Internal World who is in fact the representation of the Hatred and resentment from the MC.... more>> This character named Evil God goes on a slaughter in the MC's world until he finally tries to kill the MC and fails. From here instead of killing him the the moron MC makes a deal with him that if he manages the Internal World for the MC he will release him into the real world in the future since he is limited in his growth by the MC's cultivation level. Despite the fact that the Evil God's goal is to kill the MC he eventually lives up to his word and releases him but, does so in a way that the Evil God will remain tethered to the MC so he can never betray him. Eventually, they cross paths again when they are going to enter some restricted area. Of course the Evil God has found a way around being tethered to the MC and now wants to kill him again. He goes on a killing spree in the restricted area killing anyone he can get his hands on. He takes one of the MC's love interest and leaves her on a massive pile of bodies that he killed to apparently provoke the MC. Instead of killing the MC's love interest he decides to leave her alive and unharmed because somehow were to believe that this is more of a provocation to the MC then to actually kill her. Yup, that's the bull sh*t logic this author wants us to believe. Eventually the MC is able to defeat the Evil God and take him back into his Internal World. He is informed that the Evil God in fact makes the perfect material for the MC if he decides to create a Clone. However, the MC in his infinite wisdom decides that this would be to much of a waste so he eventually figures out how to create a Clone while leaving the Evil God's personality intact instead of having it wiped out the way a normal clone is created. Because this is totally smart, right? He then decides to release the Evil God AGAIN and guess what he does next? That's right! He betrays the MC AGAIN and were just suppose to believe this bullsh*t is believable. I recommend you read something else if your don't want to waste hours of your life reading this crap. <<less
4 Likes · Like Permalink | Report

It was my favorite cultivation manhua, the novels translations are so poor you cant figure out whats going on most of the time. I'm dropping for these reasons: ... more>>
Spoiler

Raped a girl to save his sister. He could have done so many other things to save her but chose to do that. At least Manhua made it so it wasn't rape, but novel still did it.

A great potential waifu was forced into agreeing to being with another woman who she didn't want to be around. The woman is a rapist kuudere villain/totally hateable. MC plans on gaining strength and saving her in chapter 978 but searching through to chapter 2000 she isn't saved yet. Author totally forgets about that character and leaves her in the clutches of a detestable creep.

At one point, he's totally bullied by some guys and allows himself to be taken prisoner and when he finally has a chance for payback he just ignores them. Up until now one thing I liked about him was that he wouldnt take sh*t from anyone.

Other reviews spoilers show that the MC just gets more stupid further on.

[collapse]
Clearly the author was drawing out this series, at some point the author just stopped having a plan and started puking random arcs out. Its all so convoluted. <<less
1 Likes · Like Permalink | Report

I was enjoying the sh*t out of this novel and manga up till it was turned in to complete pile of shit. I just wish I haven't read that far. Humans literally use demons as test subject when they were in their territory human territory but then he goes towards the other lands where the demons live and other races and ofcures Desmond being demons they are eating humans and treating them badly... but he is like f*** all the races humans the best. Demon elf didn't even care about... more>> humans if it wasn't for that girl queen they would have just let the demons kill him. It's only couse they are attractive elves. ensted of trying to bring or unite the races he just created more hatred. This novel is trash don't bother wasting your time. But then again it's just my opinion nothing more <<less
1 Likes · Like Permalink | Report
Leave a Review (Guidelines)
You must be logged in to rate and post a review. Register an account to get started.

Adventures of the Goldthirst Company