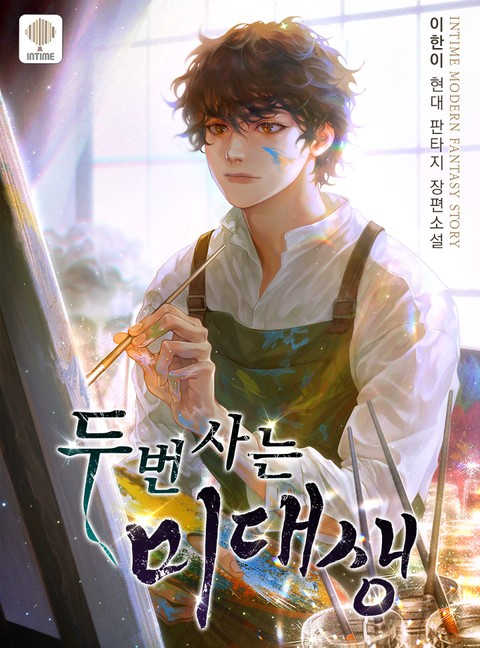 One entry per line
이한이

Status in Country of Origin. One entry per line
200 chapters (Completed)

One entry per line
Intime
RidiBooks

I dreamed of becoming a successful designer.

‘If I ever go back in time, I would take back everything that belongs to me.’

It was the lament of someone who missed his chance 3 times.

But I was serious in my own way.

‘If only I could start over just like in a webnovel.’

It had already been too late.

The moment I thought about it, my life became a modern fantasy.

These are recommendation lists which contains An Art Student Who Lives Twice. You should give them a visit if you're looking for similar novels to read. Alternatively, you can also create your own list.
More Lists >>>

Looking at what's there this 4+ stars with potential to be 5. The setting is current Era Korea, as the backdrop for the ruined life of a man who never stood up for himself. Miraculously he is rewound to his college days before it all went wrong. The novel is making it clear that all he has is his knowledge of the future and he doesn't have a photographic memory or ridiculous abilities outside his field. 👍👍 It's a great setting and should give the author much to play with. I have... more>> to deduct a star for the writing. While it may get better currently it's disorganized and the flow is chaotic. It's in no way shape or form unreadable it's just a bit off. Bottom line: Well worth the risk <<less
10 Likes · Like Permalink | Report

Set in pre-COVID19 pandemic modern day, MC is an Artist who fails his first life and gets a second chance to succeed at being a successful designer. I don't know how to rate this novel I initially loved it when reading 30 chapters of the TL & then glossed over things because I read MTL for the rest & there were parts I loved (such as interior cafe redecorating & the artwork being created). The following is a very long spoiler portion which I elaborate portions I didn't enjoy in the novel ---------- Crypto dealbreaker section ... more>>
Spoiler

I am only mention portions that stuck out to me & made me question MC's character and highlights that MC is more of an investor with cryptobro. Totally understand that it can be seen out of context in a way & honestly tried to gloss it over and detach myself from it because it's fiction & MC doesn't go investing into it; however it is difficult when MC talks about investing throughout the novel as his goal is to invest.

"'Even if you work hard to save money, one bitcoin and one stock are enough. At the very least, if you buy an apartment in Seoul, it goes up endlessly.'

In a way, money was infinitely important, but in another way, it was also an infinitely light thing.

In short, money didn't play a very important role to me in this life.

If there is, use it as an investment.

If it doesn't exist, use it as it is and put it in Bitcoin.

That was my basic motto."

I really wish this novel didn't mention Crypto as MC states if everything fails he'd invest in crypto/bitcoin (and when this was mentioned when he was already rich from his business & investing in a game company & getting shares from coffee company renovation franchise.

And he really didn't need to mention this as with these statements it just sounds like MC regrets in his past life/ 1st chance that he didn't invest in stock or bitcoin. So I feel the whole goal of being a designer just lessened and it more became him wanting to become an investor rather than a designer)

Originally I thought being open to the idea of partaking in stocks & crypto fit his greedy character (especially since he failed his first life so wanting money in this life made sense) and just relieved he didn't do crypto, but I then started to noticed how much more often it kept showing up and detracted a lot from what I looked forward to reading.

" Of course, it's not necessarily about money.

Money is what you should do to invest in Bitcoin."

But MC repeats throughout the novel on occasion that life his goal wasn't money.

Like MC admits he's greedy for opportunities but just latter half tries to make it sound like money is not his goal just a means to it... I don't know why he has to reason with the readers (or himself) that money isn't important to him.

Like I feel it is as he saves his family (specifically his grandma) with money & proudly admits it........ & he didn't need to invest in Coinsoft games & just do his own thing...

He is doing well because he has money & investing. If he didn't need money, you don't have to invest in all of this stuff to get more money just invest in yourself... He could've just invested into marketing and making himself more famous which I feel aligns with his goal but he doesn't even make a social media account.

In the beginning, I decided not to care about money in this life. "

But the hypocrite thing is he does care about money. And this line was pretty much the dealbreaker for me. These statements kind of echoed a lot cryptobro thinking where real money is sort of useless and you gotta invest in bitcoin idealogy. So I ended up dropping around this point because I was fed up over them just popping up again & again.

[collapse]
The following are what I definitely would just gloss over and not something I'd drop over, but noticed. ----------- MC coincidentally gets convenient opportunities
Spoiler

I felt a lot of things are too convenient for the MC & he got a lot of lucky opportunities from connections (like his professors) which was definitely very purposefully crafted by the author. Like it's great MC took advantage of it but the requirements and timing seem all too convenient.

2) Extremely famous artist happens to want to collab with MC

1) Stroke kdrama ends up about MC's life & MC is always confidentally sure he is so successful in everything.

2) Eventually people around him kept praising him in exaggerated unnatural way.

A director said he's so entrepreneurial that MC would never get scammed (Like yeah director is well unaware to the director this is MC's 2nd life.. & Crypto is a ponzi scheme according to CoinDesk so if MC failed his art endeavors, he'd be scammed in the end...)

I really couldn't suspend my disbelief... when real life people were being mentioned, the whole Trump chapter where the tv host Jimmy would flatter MC's art of the oval office to the point that even President Trump would buy his work seems really unrealistic. (Like Trump has bought vanity portraits of himself which I which I think makes sense to hear a comment if MC drew Trump, but MC drew the oval office... so why specifically Trump would be willing to buy it? Can't Obama want to buy it too?) But I really don't think TV hosts would comment statements like that so specifically too. It just felt unnatural

MC gets gigs to promote a game tournament & make a music video and they go viral which fun variety. But it just seems like a 1 time thing...... what I don't get is why MC didn't just make viral videos (or his own social media accounts and go viral).. or even yet spend money on marketing to promote himself more. (Like there is a chapter very late in the novel titled marketing and I was just like wow you only got to that part then... XD)

[collapse]
Overall the author had lot of variety and explored lot of ideas, but I feel could've been better without the investing & flesh out some lacking parts. <<less
8 Likes · Like Permalink | Report

Edit: I finished this story via MTL (very readable since there aren't any weird fantasy terms). It's really good and the pacing and plot development held up quite well! MC isn't an overly greedy person and has always conducted things with sincerity but all with a keen eye for business opportunities and there is also a bit of romance at the end! Honestly a really superb work and one I will remember. I like this a lot! It's really a nice break from all the fantasy/Wuxia/returnee etc novels and fanfics... more>> I read and this protagonist is incredibly relatable. His past tribulations and trials are something most people growing up in Asia have experienced at least once in his life, and a lot of his thoughts and reflections are really fitting. The events also flow wonderfully and I've honestly been completely hooked by this story. please give it a try if you like a modern reincarnation story that's a slice of life! There is no special abilities or any genius talent involved - simply a guy with experience and hard work and determination <<less
7 Likes · Like Permalink | Report

The writing is kinda chaotic at first but it later on it gets better. I'll give this 5 star since this is my type of stories. MC that went back from the past and tries to correct his life of living, he's also using his knowledge of the future designs and trends. I like it so much, waiting for more chapters!!
4 Likes · Like Permalink | Report

I finished this story with an MTL because I could not wait for the updates (since it is currently at C.29). I am a fan of isekai stories, and this one had me hooked. I finished it after 2 days of reading through it until C.200, and I enjoyed it. I love how it was focused on his career as an artist, there was no romance (except like 1-2 pages near the end that came out of nowhere), and he uses motifs and designs that were popular in the future to... more>> bring his art to another level, while not completely ripping off those designs. I even looked up some of the artists as I was reading it to be a bit more familiar with them. It did feel OP at the very end, where I thought the quality deteriorated, but I loved how it made me think about art, and taking some fun weekend classes to enjoy having more art in my life. It is a lighthearted isekai novel about a group of friends who work hard to bring each other and those around them upwards. <<less
3 Likes · Like Permalink | Report

I love this. There's no system bs or MC gain amazing skill. The MC only return to the past with his memory intact which he's not remember anything. Only the art industry since he's a person who is in that industry and maybe some common knowledge such as the rise of the land price, some big stock etc.
3 Likes · Like Permalink | Report

Very light and not too much drama. MC is wisely making use of his advantages. I really want to read the mtl so if anyone who can read this knows of it, please comment the link and put space between letters.
3 Likes · Like Permalink | Report
Advertisements
Leave a Review (Guidelines)
You must be logged in to rate and post a review. Register an account to get started.

The Martial King Conquers the Magic...

Path of the Hive Queen