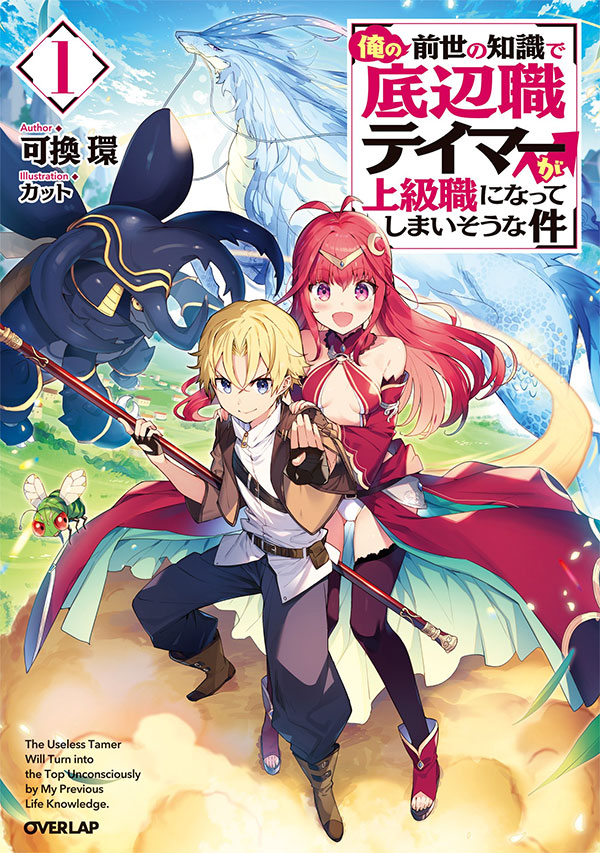 Due to an accident, the protagonist Varius died and was reincarnated. He was shocked to find in this new world, his former job as a Tamer in the previous world was acknowledged as a low class job in this new world.

Utilizing his knowledge from his previous life as a basis, he then applied unique buffs to his beasts, taking back the ultimate power that he once possessed.

With this power in his hands, he sought to start his life as an adventurer. However-

The Weakest Tamer Trash Picking Journey Begins (1)
An S-ranked Party’s Burden Tamer, I Awoke My True Power by Having My Familiar Killed ~The Exiled Tamer is Actually the Only Necromancer in the World. Unknowingly Becoming the Strongest While Enjoying this Excess Power~ (1)
The Executed Sage Reincarnates as a Lich and Begins a War of Aggression (1)
Weakest Occupation “Blacksmith” Become The Strongest (1)
The Daily Life of the Late Bloomer Tamer (1)

These are recommendation lists which contains About Making the Low-Tier Tamer Profession Top-Tier Using My Previous Life’s Knowledge. You should give them a visit if you're looking for similar novels to read. Alternatively, you can also create your own list.
More Lists >>>

It's exactly as the title says. So much so that there's really nothing to say, except there's no hint of romance or harem so far. So if the title interests you (and you like Japanese novels), you probably won't be disappointed by the story. I make no guarantees about the translation quality because I've read it on syosetsu. For what it's worth, I dropped this novel around here because I found the character interaction lacking, and that's what I like most in a story. There is some, just not enough for... more>> me. Your mileage may vary. <<less
9 Likes · Like Permalink | Report

If I had to describe this story in one word, it would be "shallow". Short chapters with horribly fast pacing. Things just keep happening in a matter of fact way. No world building. No meningful dialogue. MC who originates from a fantasy world somehow has knowlege of high-school to university level physics. MC dies in a freak storage magic accident and is now in a "new" world, leaving behind everyone and everything relevant to his former life and has literally no reaction upon regaining his memories. MC faces no challenges whatsoever, whether it... more>> be defeating monsters or powering up and evolving his tamed beasts. He literally tames a high level beast simply by giving it a taste of his special pet food and the beast literally jumps at the oppurtunity to be tamed just so it can get to eat more in the future. Then he instantly awakens it barely a fay later by laying out the materials he already has in his storage, which came into the new world with him with all items intact, and saying a one line chant. And as for the awakening, all it did was make the beast stronger with no types of species evolution or even an appearance change, nothing to look forward to there. This novel takes the monster tamer genre and somehow turns it into something woefully unexciting and bland. Even the world the MC "reincarnated" into is a carbon copy of his previous vague world with the difference being that people lack a lot of general knowlege which the MC obviously knows. <<less
6 Likes · Like Permalink | Report

I hopped over from the manga, read the TL from the start up to chapter 23, and finished reading the rest of volume 1 from the raws. Overall, the story is a major disappointment. The premise of the story is pretty basic; your typical power fantasy with a useless monster tamer trying to show everyone his class it not garbage. Not exactly a revolutionary idea. Where the story starts to fall apart is how the author repeatedly tries to interject "uniqueness" into the story without any actual substance. This instead becomes... more>> a jumbled mess of random ideas and shallow plotlines, rather than a cohesive and interesting novel. Take for instance the very first scene where our MC is isekai'd. Rather than the MC somehow dying due to an accident, the MC gets literally swallowed up by his own storage magic which somehow reincarnates him into a new body. It is a very unique idea, being essentially sucked into an "interdimensional space" due to a seemingly benign trope magic. However, this setting is never actually explored any deeper than "oh well, that happened". The MC never reflects on what lead him to be isekai'd in the first place, and continues to use storage magic without precaution. The author has a constant need to add in these "unique aspects" at random. While these aspects are interesting while they last, none of them actually contribute to the overall plot in any meaningful way. Another point of failure in this novel is that the author uses a lot of "Real World" knowledge and terms without explaining any of it; expecting readers to have knowledge of both science and literature. While these tidbits of aerospace-physics and Lovecraftean mythos are interesting for readers already knowledgeable about the subjects, they only serve as small "Easter eggs" that are never explained. As an example, the following spoiler is an analysis of the very first chapter demonstrating this problem, but I will put it in a spoiler tag for a sake of brevity.
Spoiler

In the very first fight, the MC fights against the legendary monkey king Son Goku/Son Wukong. During said fight, Son Goku demonstrates many of his iconic powers such as using the Ruyi Jingu Bang (Monkey King's staff). The author even goes as far as to include small details such as Son Goku using his hair to create clones, which is accurate to his original lore. The attention to detail is very refreshing to readers familiar to the mythos of Journey to the West; but that is also a great weakness to the writing. "Uninformed readers" experience constant disconnects when the story continually draws too much from Real World references. In that same first fight, our MC utilizes the Golden Headband as one of the monkey king's weaknesses. It is never explained how or why the MC knows the Golden Headband is a weakness, and the reader doesn't even know the monkey king is wearing it because there is no description of his appearance. Only readers who are familiar with Journey to the West's lore would recognize this throwback to the original Monkey King's weakness. Similarly the MC summons Yog-Sothoth during the fight, but there are no descriptors to explain Yog-Sothoth's powers or appearance. Most readers would be at a complete loss as to how this creature looks unless they are familiar with Lovecraft/Cthulhu mythos. These constant out-of-context references somewhat take away from the story and will likely make most readers who aren't walking encyclopedia feel left behind.

[collapse]
My final notes on the story is that the author tries way too hard in areas where he really shouldn't. Instead of spending time with character and world building, he instead spends time developing random side arcs having to do with Real World mythos. While the contents of the subplots are certainly unique to see in this type of genre, it does little to help us connect with the characters in any meaningful way. Overall I give the story a 1/5. The only redeeming quality is that the randomness of the plot is somewhat refreshing, if not for all the wrong reasons. Rating of the translations: As of this review, only one group has TL'd this and appears to be on a small hiatus. Now, I normally do not needlessly nitpick at translation if they are at least up to par. However, this particular TL claims to have a JLPT N1 proficiency (which is the highest level) while doing semi-professional translations. They are even offering translation work on commission. And since they claim to be professional, I will critique them as such. That being said, I am nowhere near N1 proficiency so I may or may not be speaking out of my ass. Overall I would still rate the translations as a 3.5/5, but you can read my entire review in the spoiler below.
Spoiler

The translations are somewhat above average in quality, with the TL having enough knowledge to recognize pop culture references such as exam prep references. Grammar is acceptable but could use some work, and intonation is a bit flat (although the source material doesn't help much on this front). What I find most jarring is the small mistakes such as repeating a word twice and deleting the object of the sentence. Additionally, they repeatedly misspelled the word "Millenium" which should be spelled Millennium with two n's. A simple spellcheck would have caught this error.

My biggest flag is that the TL claimed the word ハリボテ (Haribote) has no meaning whatsoever and should be translated as "Harry Botay", before promptly being corrected by someone in the comments saying it means fake or "papier-mâché". The reason why I say this is a flag is because literally every dictionary I could find (Jisho, Rikaikun, Wiktionary, Kotobank, Weblio, even Pixiv, Niconico, and Goo. Ne. Jp) ALL have correct dictionary entries for this word. In contrast, the "Machine translation" tools such as Google translate, Bing translate, ATLAS, and DeepL all fail to translate this word and output [Haribote] or Hackneyed in the case of DeepL. Now, I'm not doubting the TL's claim of being JLPT N1 proficient, but I expect them to AT LEAST lookup the word in any dictionary before just giving up and saying "it doesn't translate to anything". Even as a hobby, this is a giant red flag for someone who claims to be semi-professional and has N1 levels of understanding.

Despite all that, I do believe the translations are good overall. Though not perfect, I did not find any absurd errors in the translation or editing itself. It is very readable and the footnotes are mostly no-nonsense and add to the comprehension of the story/references. Overall I will give it a rating of 3.5/5.