Novel Updates
RegisterLogin
Theme
Search
Your changes has been saved.
A World where Mercenary Men are Called Goddesses

Home >
Novel >
A World where Mercenary Men are Called Goddesses 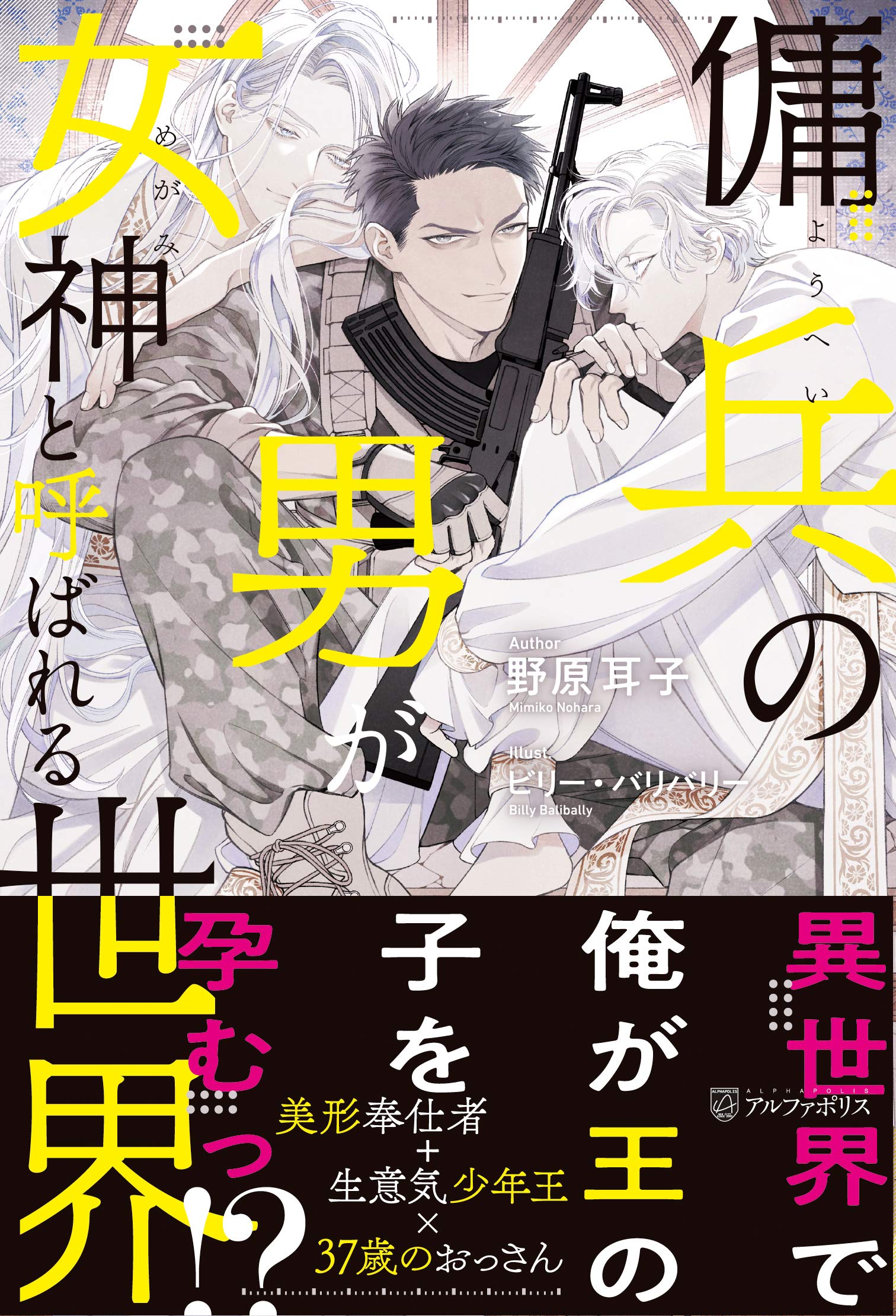 Status in Country of Origin. One entry per line
Completed (3 Volumes)

Yuichiro, a 37-year-old freelance mercenary, was blown unconscious by a grenade during a guerrilla war and found himself in a strange world. In that world, the princes are currently fighting over the throne, and civil war is brewing.

Apparently, Yuichiro was summoned as a [Goddess] to help a boy who is the [Rightful King] and save the country. An old man like himself is the Goddess? On top of that, in order to return to his original world, he has to give birth to the king’s child?

Yuichiro is disgusted, but in exchange for money, he joined the war in another world…

One entry per line
傭兵の男が女神と呼ばれる世界

These are recommendation lists which contains A World where Mercenary Men are Called Goddesses. You should give them a visit if you're looking for similar novels to read. Alternatively, you can also create your own list.
More Lists >>>

so far its been a great read! JP novels, especially BL ones, have a tendency to be little more than unedited drafts. But this one might just be one of the only ones I can confidently say reads like an actual novel (w/ a bonus of being in 3rd person too!). Though part of that is also because Translator-san has done an amazing job. the ML situation seems to be a 3P with Noah and Temeraire - Im not sure whether id lable this as r*pe or not, but it is definitely dubious consent;
Spoiler

MC agrees to have s*x because he wants to go home, but his disgust and discomfort at having the MLs touch him is explicitly written

[collapse]
MC is likable, hes not the kindest character, but he is a mercenary for hire that has been plucked straight out of the losing side of one battlefield into another - so I cant really blame him for being pessimistic Worldbuilding is great straight off the bat, we already have differing terms for time and length, cities, geological features, differing appearances (hair/skin/eye colour) and biology (lifespan), political situations and the governing authorities explained - and all in the first few chapters too! Count me impressed Id hop on this bus quick, I can easily see this being one of the top 3 for JP BL on here granted the translation continues
18 Likes · Like Permalink | Report

Updated Review (28th September 2022) I created a NU account just to write this review and I will STILL maintain my ⭐⭐⭐⭐⭐ 5-STAR rating since you should NOT skip reading this novel. Although it's still early at this point, I personally had to agree that this novel is a gem, at least for me! Credit goes to the T/N who did an amazing job translating this novel. If any of you are familiar with reading JP novels before, they tend to be in 1st POV. So reading this in 3rd POV... more>> surprised me, but it didn't interrupt the flow of the story at all. As for the characters, they all have their own dynamics, personalities, and quirks. The background story for each character is laid out beautifully. In addition, this novel intricately describes the different world settings that Yuichiro transferred to; such as the currency, the different unit systems, geographical information, political settings, and others. The hierarchical structure of their military is also well explained in the novel.
Spoiler

The military strategies, weapons, their armies' strengths and weaknesses are also mentioned in this novel. Although I'm not a military geek, I enjoyed reading this part very much.

[collapse]
You may think this is a lot of information to digest, but believe me, it's really not! It's not a forced info-dumping you might see in other novels. Other than that, our MC is ruthless in his personality, but not without reason. His being a mercenary is one thing, but the way he acted so is probably due to his past. Till this point, his past hasn't totally been revealed yet, but I can't wait to read the next chapters to find out what really happened.
Spoiler

I accessed the advance chapters by subscribing the T/N donation page, and I can say I am NOT disappointed at all and it's allll worth it! Apparently, the MC had a wife and a daughter that was killed in the past. After that, he went on a rampage, disregarding his own life, and went on a killing spree. I guess this might be the main reason why he becomes apathetic toward others and pursues money as his goal. Not only him, but all the other characters also had their own share of past as well, including Temeraire and Goat.

[collapse]
Same goes to other characters as well! Other characters are all dimensional and not a wallpaper. So, in overall all the side characters are well-balanced and explained in the story. Lastly, since the T/N said the current arc finishes at chapter 8, I can't wait to see how the story pans out in later arcs.
Spoiler

(Update) I'm on 2nd arc, and I'm loving the storyline. In this arc, you'll understand the political views, and how Yuichiro's group is really capable of executing their military strategies. And, you'll see our main characters' emotional viewpoints as well, mainly Temeraire and Yuichiro, which was superb for me as I can somehow comprehend their inner thoughts and relate them with their actions.

[collapse]
With that, I hope the T/N continue her translation till later volumes as well since her translation is reaaally good. So, support her while you can people! <<less
8 Likes · Like Permalink | Report

Only few chapters in, but I think the translator did a very good job translating this novel. All I could say at this point, the characters seem to have some depths, and personality-wise, they're different from each other. ... more>>
Spoiler

Being a mercenary, Yuichiro's pov seems to be conflicting with the other characters, where he views killing as an act of survival or ways of obtaining money. And, although there's a lot of unanswered questions about his purpose in the other world and his background, but I think we'll definitely see some story development in the next few chapters. Not only for Yuichiro but for other characters as well.

As for Noah, he seems like a spoiled brat, but with his responsibilities of being king and at war, fighting with his older brothers... He seems to have a lot in his hands... I predict he'll be influenced by our MC later on, but as for how, we're gonna have to see.

I would say that the most interesting character by far is probably Temeraire. I got the vibes that he has a lot of hidden secrets.. It may be just me but, yeah. I don't know but I've got the feeling that he and Yuichiro will be going through together a lot. In my opinion, he's definitely the main ML.

[collapse]
Story development ✅️ Character development ✅️ All I can say at this point, the story is reallly interesting... And just like the translator said, this story is not the fluffy kind that you might have read before. <<less
8 Likes · Like Permalink | Report

I was expecting a typical plot with r*pe but instead got characters with depth, interesting plot and world building. It’s a gem, if it wasn’t a BL I think it would be insanely popular and get adapted quickly.
2 Likes · Like Permalink | Report

This is reallyyy good. Likable MC with a realistic and rational mindset + smut :33 The way how the novel by s written is engaging as well. Kudos to the translator for doing a good job with the translation. 💕
1 Likes · Like Permalink | Report

• Ch1-3 : This is actually shockingly good. The TL did an excellent job and it reads like a novel with the length and details in each paragraph. World building also surprisingly starts out strong, color me impressed. I didn't expect to find this gem, and I'm even more glad that a translator whose tl-ed works I've read before is tl-ing this. Will continue to read, millions of kudos to the og author and the TL! P.S. Will edit once I've caught up with current tl-ed chapters.
1 Likes · Like Permalink | Report
Leave a Review (Guidelines)
You must be logged in to rate and post a review. Register an account to get started.