Novel Updates
RegisterLogin
Theme
Search
Your changes has been saved.
Advertisements
A Warrior Exiled by the Hero and His Lover

Home >
Novel >
A Warrior Exiled by the Hero and His Lover 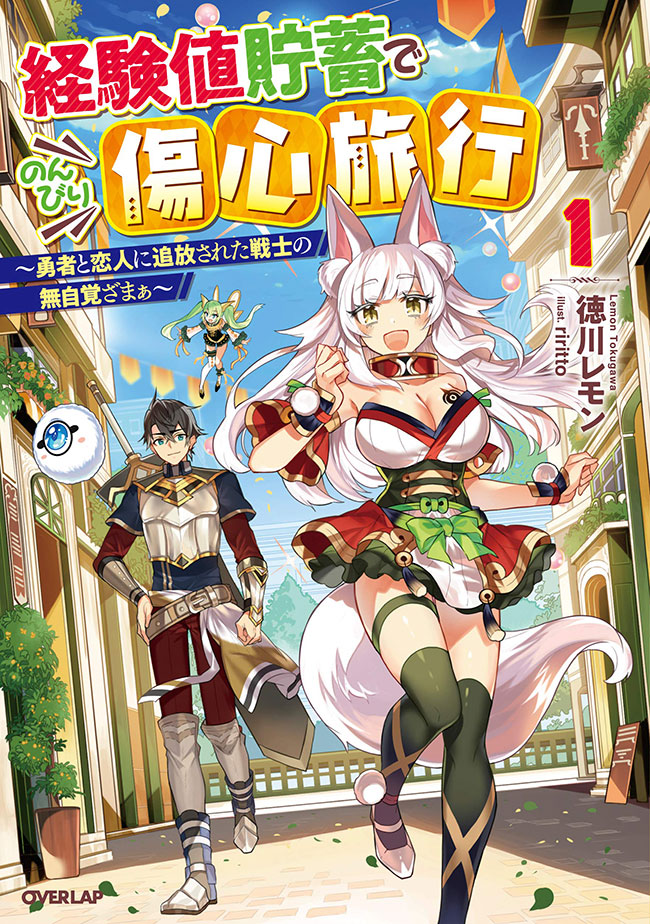 One entry per line
riritto

After losing his girlfriend to a brave hero, Toru is expelled from his S-Rank party. With a feeling of sadness and pain in his heart, he defeats a demon he meets outside the city, and his ability [to save experience] is broken! Toru becomes level 300 in the blink of an eye! With this power that far surpasses that of heroes, there is nothing that can stop him. Kaede, a s*ave he met on his journey, forms a group called the “Mangyu Brigade”, and easily completes dungeons, acquires the legendary sacred weapons, and thanks to his skills, his friends level up easily! He rescued a countess who was attacked by bandits on the road, and befriended a legendary beast. Toru’s journey continues at a leisurely pace, as he repeatedly encounters various people along the way, while his former party of heroes are deprived of opportunities to play an active role and fall into decline. This is the beginning of the life of a 300 level warrior!

My Lover Was Stolen, And I Was Kicked Out Of The Hero’s Party, But I Awakened To The EX Skill “Fixed Damage” And Became Invincible. Now, Let’s Begin Some Revenge (1)

These are recommendation lists which contains A Warrior Exiled by the Hero and His Lover. You should give them a visit if you're looking for similar novels to read. Alternatively, you can also create your own list.
More Lists >>>

About the Ex-Friends for now
Spoiler

"If you regain your thoughts and feelings, there will always be a reaction. If the act during brainwashing deviates greatly from the original intention, the burden on the mind is great. In some cases, there is a risk of collapse. ”

From the first awaken

Nei: MC saved her from the Demon General (Sain abandon her to run away from that Demon), later MC solve her brainwash 'state'. The burden was so great that later she want to suicide (implicitly), to save her MC made her his s*ave and give her his first and last command that's to [LIVE]. Later she goes back to home (their village) to help her parents and waiting for MC to come home. (Ch 35~38)

Soara: MC bought her when he notice her on a s*ave trader carriage (She sold by Sain). Later MC solve her brainwash 'state' and awaken her hidden nature. The kind personality that she always shown to them before was a fake forced by her family education (priest family). She not lost her will to live, later she force MC to make her his s*ave so 'they can always be together (future) ', she goes to village as well I think. (Ch 56)

Note: Soara and Nei are MC childhood friends, before they got brainwashed they love MC. Lisa and Sain are outsider from city that come to move to their village.

Lisa: She not brainwashed at all, she is the Demon King (Lv 800), she disguise herself to get the Hero (Sain) the reason is because if the Hero killed later (100 Years) there will be a new Hero. MC parents killed by her, so from the very first place MC just a stepping stone for her (she never love MC at all). (Ch 62)

Why [Hero (Job) ] was so important: Because that job reduce Demon King level by 1/s (temporary).

Sain: (Ch 89) He executed in the execution ground publicly.

It's a good story but if only there weren't any pop-up ads with Humiku then I'd be enjoying the read. They always pop up when I click the next chapter. I don't even read the first paragraph before being redirected. That sucks ass!
8 Likes · Like Permalink | Report

I like the story so far but I was a little disappointed in this so called hero that betrayed him by kicking him out of the party and stealing the MC's lover from him. I mean, ... more>>
Spoiler

I thought he was some sauve douche who secretly seduced the MC's girl but turns out he's just a rapist with mind control power.

the opening has a feel of after-hentai, new but also quite typical at the same time. MC got cucked... more>>
Spoiler

since the Hero has mind-control skill. (Okay, worst isekai setting ever)

[collapse]
. Then he leaves the party and then somehow becomes OP. The story itself is bland, the plot is full of holes.
Spoiler

(only Heroes can kill demon kings thanks to their occupation, reducing 1lvl/s. Total bullshit.)

[collapse]
Can't be a laid-back isekai story or a dark-isekai type. Can't say the writings is bad or not, but the contents are terrible already. Just reading the sypnosis proves that. Basically, a total wasste of time. Even Ankoku Kishi Monogatari or Death March is better. <<less
6 Likes · Like Permalink | Report

I liked it a lot at the beginning, the MC acts like a smart person, from realizing the real reason for taking him down from the group, to buying a s*ave that cannot betray him and for several chapters there is nothing I can complain about and It was a light novel that promised a good story !!! If it weren't for the holes in the plot¡¡¡ EXAMPLE: ... more>>
Spoiler

After buying the s*ave who is a beast girl, he helps her to level up in a dungeon and after several chapters she becomes an adult. Because of the level increase (which is now conveniently legal ¬_¬) typical of MC op stories, EVERYTHING IS CONVENIENT

[collapse]
I thought the story would become interesting when the MC discovered the mind control of his fiancée and his childhood friends, but what does MC do? goes sightseeing enjoying the trip before seeking revenge, I say they brainwashed your fiancée (who is conveniently the demon king and that I never love the MC since the author did not want to remove kaede as the heroine for a desecrated fiancee (¬_ ¬) but the MC did not know) and his childhood friends, he should be angry and go directly for revenge without being distracted by things like tourism sorry if there is a problem in grammar since I translated it by the all powerful google from my language <<less
4 Likes · Like Permalink | Report

The whole story is about author's faptasy rather than developing the isekai stories. It's not that this is a bad story, but it ain't good either. And it's choked full of disappointment after disappointment in every chapter where 70% of them are full of MC faptasizing his bit*h s*aves.. And what's really s*upid is, after what ever happened in chapter 63 which is absent, chapter 64 is about the aftermath meeting of Toru and sain and the revelation of his ex-b*tch, the demon king (or should've been called demoness), the... more>> king of the kingdom Toru save ask him to go to take a hot bath rather than pressing the demoness issue. And his b*tches? Kinda ticks me off every now and then hungry for their master's attention like every each one of them are made from who*e particles. It's like the author can't think of anything else rather than hentai thing. The only saving grace is how good and fast the translator is. I just wish the author will just cut all these s*x romance crap and start to develop the story more seriously before I start to feel it's waste of time to read it. <<less
4 Likes · Like Permalink | Report

Chapter 60 they came to the town and get caught and imprison because he can't hold his laugh (the heroin is tickle him on the road till the town WTF) after guard order him to take out his ID and MC still laughing. At night he get the meal from guard and released because guard seeing him had a proof of Hero on his arm... WTF guard idiot & blind, his proof of Hero is on his arm you blind! That a huge ass golden bracelet is stand out no matter you look at!!! and after that MC REFUSE to come out form prison because he don't want to search for inn to stay and gave guard some money to lend the prison room WTF THIS IDIOT!!!

This is a piece of how much idiot MC is

"Actually, demons-kin can't ride horses after the age of 20." (Pione)

Pione looks like she's crying in front of Frau and Kaede.

I almost believed it. (MC)

His IQ is negative

He name his new party the same as thief group after he get attacked by them... BIG BRAIN TIME! congratz with their trouble

[collapse]
I almost drop this right away... <<less
4 Likes · Like Permalink | Report

I'm giving this three stars just because I'm suffering from an anime high right now... to be honest this novel will be lucky if it gets two stars The MC has problems... and I mean big ones... something is wrong with his head... this dude is more s*upid than goku and that's saying something... I don't think I've read a book on such a ret*rd in my life... you can't even call him dense, this dude is ret*rded... I'm even astounded as to how the dude can remember how to breathe...... more>> honestly at this point I can't even hate on him, I really pity this dude, he needs a care facility In short, if you don't like the character, don't hate him, hate the author who gave him Patrick Star's brain <<less
3 Likes · Like Permalink | Report

What are you doing ?! Yes, the protagonist has big problems in the first chapters, but! This is a normal, kind and calm guy who solves his problems and helps others. Despite the fact that his friends betrayed him, he found the strength to live on and help others. The main character from a very problematic person gradually becomes a really great main character.
The book unfolds gradually!
2 Likes · Like Permalink | Report

to be honest I liked the story in the beginning but where I am now the story became boring because I don't know why author made a huge blunder secondly the translation is not so good third I don't now if its the author or the translator but the scenario is not explained and the story feels rushed its up to you if you want to read well here is a spoiler you are welcome to read the spoiler after you read 10 chapters ... more>>
Spoiler

A comedy, funny to read, nothing more.
1 Likes · Like Permalink | Report

["What's in that letter?"
I pulled the envelope out of my pocket and twisted my neck.
It was given to me by Count Roane, but he did not tell me the details of its contents.
{{{ I just wanted him to show it to a certain person. }}}
I know it was a reward for saving Marianne somehow. In the end, I got nothing.] The novel, although interesting at the beginning, after a couple of chapters it turns into something that looks rushed in the making, lacking details and background and... more>> last but not least, following such a fast development that besides making your head spin, most of the time makes no sense for there's no transition between scenes either when in action or normal every day life narrative, it jumps directly to whatever is gonna happen, there's no building up of any situation... not mentioning also the continuous mistakes in translation when person's pronouns keep adding to the confusion, (See text enclosed in {{{ }}} above) <<less