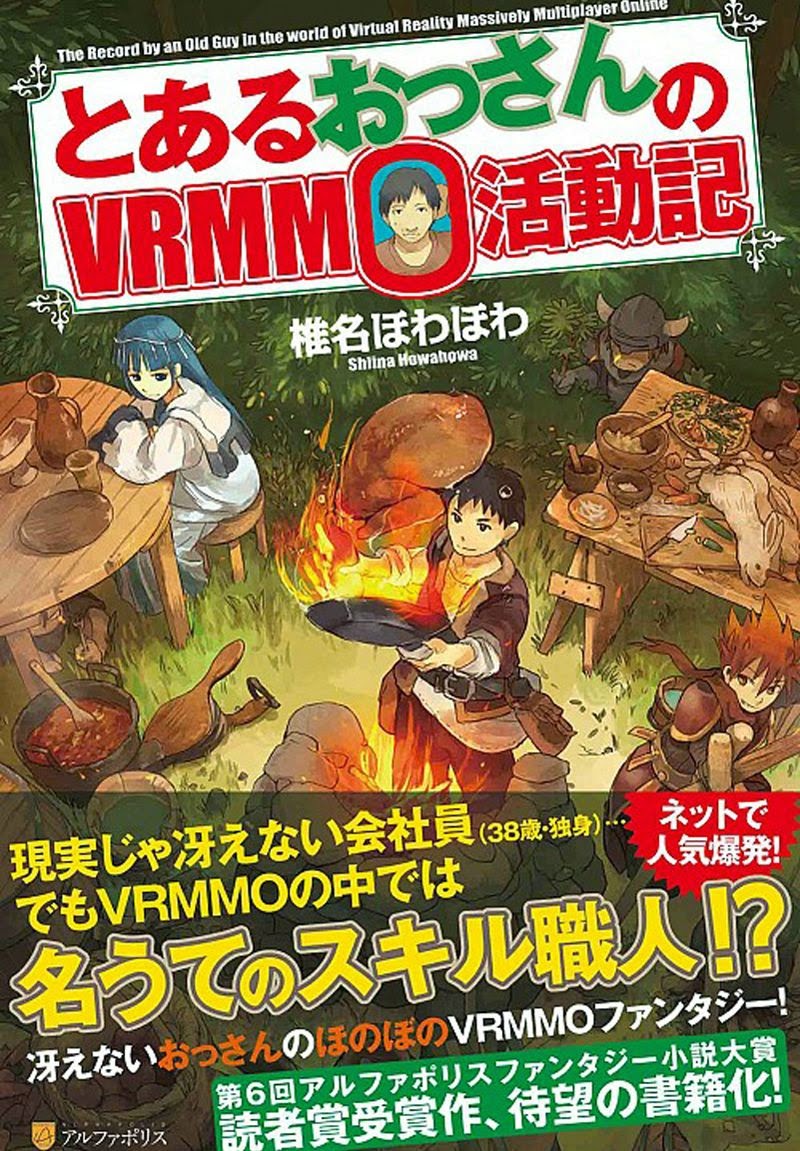 One entry per line
Shiina Howahowa

One entry per line
Yamada
ヤマーダ

38-year-old Tanaka Daichi’s childhood dream of playing a VRMMO has finally come to life. As he creates his character, he decides to choose skills that are considered useless by others, since he has no interest in playing like a main character. Follow the adventures of Daichi as he strives to use his mismatched set of worthless skills to achieve his dream goal of simply being able to enjoy an alternate life in a virtual reality.

These are recommendation lists which contains A Certain Middle-Aged Man’s VRMMO Activity Log. You should give them a visit if you're looking for similar novels to read. Alternatively, you can also create your own list.
More Lists >>>

Screw those cooking parts, I don’t give a damn, I just skip it, I don’t have the slight interest on it, I don’t even watch those cooking programs on TV, those f*cking idiot noodle eaters. The crafting and bow parts are cool, they make the MC feels clever and smart, ty god that there finally is a MC that uses his head instead those boring cheats that makes him into a pseudo wise worm. The author screwed badly with the romance with the history, maybe on Japan the only WN... more>> that sell are those with herbivorous beta MC. <<less
1 Likes · Like Permalink | Report

Let me preface by saying I'm not a gamer. I've never played games and don;t have gaming friends so my gaming knowledge pretty much consists of random nuggets of (I'm assuming mostly incorrect or exaggerated) information from LNs and the like. So things like verisimilitude in the game setup doesn't matter to me. I couldn't care less that the author who dicks around for a few hours a day defeats people who probably invest all their time, energy, and money into fighting. Hell, isn't that the point? That his random... more>> actions can be combined and applied in different scenarios? As such, I just like the easygoingness of the MC- he plays games after work to relax, I read LNs about people playing games after work to relax. <<less
1 Likes · Like Permalink | Report

For a Slice of Life Story centered on a VRMMO game, the pacing of it is nice and steady, a lot of what Casual playing is, but I rather fund the Bashing not that easy to understand. Yes, the MC levels rather fast, takes decisions that are of questionable order for his situations, but the first can be shrugged by the "Players have no Levels, Only Skills have", and with the system on how some things on the game work, leveling depends not only of grinding, but also on taking paths... more>> of relevance to the skill being leveled.
Spoiler

the MC when doing things on crafting, he's constantly doing new things and crafts, not just a massive supply of his proven projects such as the Compound Bow or Metal arrows, skill progression may as well take that you must hone the skill by always seeking a higher level and not just doing the same action like a dumb bot would; The Thief skill wasn't a sure choice when introduced because it's a huge EXP investment and it requires constant usage, Vanguards would rarely jave time for several of the skills it offered, with only Danger sense and trap detection having some worth, yet paying a value stated to be rather high for a Skill set where only 2 of them wpuwo be of use is for the generic player a waste (these 8 EXP could very well be used to Advance on Skill tier or acquire something else with better Attack focus) ; On medicine and Apothecary, they were considered useless probably because like the Bow, they're skills that only have their full use with the proper combination (such as Earth's Bow, Kick, Wind and Stealth, too many skills that require parallel usage to make a single one be worth it), and spending 3 or more of your 10 starting skill slots to build an optimal set for a select few within is probably considered not effective, for them it would be the same as making a random or balanced stat Character on other RPGs.

The user who criticize his battle with the Fairy Queen must have forgotten one extra chapter long after that arc, where the AI of the Fairy Queen was rather Serious and Conceited/Arrogant, with a proper reasoning of being imposing and one that looked down on other fellow AIs, such as her Sister AI who ended Submissive from interactions with her; also at that point on the Story, Bow users were almost non-existent to general public of the Game, and her experience on PvP was from the time with Grad as his Contracted Fairy, it's implied he never had a PvP with a Bow user, Magicians could easily be denied casting spells and Frontline Melee ones would be dealt with distance and kiting, but Bow users are hard to force them to stop shooting an arrow, are rather mobile like Vanguards, and Bows have only their Pull force limit the Time to Fire, the Fairy Queen was also a Magic centric foe, with Cloth defense to boot, to Arrows with proper preparation would bypass any defensive spell and she couldn't carelessly enter Melee range as Casting takes time (Bows in that Game are countered by Tanks, Magicians counter the Tanks and Bows are natural enemies of Magicians), her affinity with Earth was bad and he also had LOTS of methods to bring harm and stop chantings from either close or far ranges.

Some parts were a little hit or miss. Sad that's it's not being translated any more. I'm fairly biased though due to spending a lot of time soloing in MMORPGs over the years. The manga version is very good too.
0 Likes · Like Permalink | Report

This novel is more or less average. Though my opinion might be more biased since I've read & prefer OSO more. I'm not sure for the following chapters but up to the point I'm reading it I'm always reminded of OSO & can't help comparing the two. Both MC are actually the 'carefree-attitude' type. There is not much to say since the novel is pretty much slice of life in a virtual world. Even if there are fighting since it's just a virtual game you can't feel any tension since even if... more>> you die you'd just revive. Any antagonist would just appear as an annoying character. So in the end the story would be best judge to events or quest. I'd refrain from giving a rating for the story since to me right now (ch40) it is pretty much similar to OSO. In my personal opinion OSO is better than this so I'd recommend that although currently the translation is upto volume 9 and further volume translations will take a long time.. P.S. I think that a mistaken for a girl teenage highschool - male MC is better than an average 38-year old guy who acts like a teenager. I know he's fulfilling his childhood dream is good but atleast find a higher goal like being the best archer, cook or strongest player, he's already old and wasting his time like a grandpa if he is just living he's dream what's the point of his uselessly high PVP skills your not an OP character so just act like a mob character leave the fighting to other people your not Kirito why go solo? Sorry for any of those offended <<less
0 Likes · Like Permalink | Report

It starts off really strong but slowly devolves into a harem-like situation (it's starting to read like a neckbeard's fantasy. At one point the MC even says "milady" to one of the characters) where luck constantly rains upon the MC, along with other common tropes found in light novels tagged with dungeon or game elements. Also what's up with the Middle English? It's not endearing or anything, it's only annoying considering how nowadays people don't talk like that anymore. It becomes a matter of trying to decipher what the character... more>> is trying to say. Silver, one of the guys in the light novel, is an excellent example of this (though to be fair it's not a common sight for Middle English to appear). There are numerous other faults as well that will take me a while to get into. Overall I'm highly disappointed. It had a lot of potential but slowly became ruined by the introduction of several tasteless tropes. <<less
0 Likes · Like Permalink | Report

What hooked me into this series is the fact that the MC is an archer. The MC has no specific goal in mind besides enjoying his gaming life. It's quite entertaining as a everyday life kind of story, so it doesn't bother me that the story is going nowhere for now.
0 Likes · Like Permalink | Report

some of you who read this at first might think this is just Only Sense Online (OSO) ripoff, but opinion-wise, I personally enjoy this way more than OSO. Maybe thats mainly because im not into gender-bender, but other than that, unlike the MC in OSO this guy doesn't get pushed around and do whatever everyone said as long as they ask, which makes it hard to continue reading OSO as the MC is too pitiful. This novel's MC however, planned to play solo from the start, and doesn't get pushed... more>> around by others, instead just do everything on a whim, but ended being one of the strongest player in the game, completely changing other player's view of the skill they call useless <<less
0 Likes · Like Permalink | Report

Very light hearted simple story with an awfully unreasonably realistic and plausible character instead of some trash high/middle school MC that should go choke on a purple dildo to death.
Entire premise is he just does whatever his whimsy, none of that I gotta be the very best, read all the forums, catch em all, numbers!! numbers!! stats!!..... nah just I feel like doing this and Im gonna do it at my on pace. No life or death moments just hey gonna give archery a try... does archery.
Good premise... more>> but can be kinda meh here and there but this is after all a slice of life genre <<less